What happened on Social Media in December: monthly round-up

Sadly, the most magical time of the year has passed and now we all have to remember how to do our jobs again. However, here’s one more chance to get that holiday feeling back — our monthly roundup of the main social media news events that happened in December.

Admittedly, social media companies were not immune to the holiday spirit and weren’t being as active newsmakers as usual. And yet, there are some things to talk about: various efforts to make social media platforms abuse-free, some new features, and one small Twitter security issue. If you’ve read our 2019 social media roundup already, you’ll notice that the major themes and trends I identified in that magnum opus are reflected in the news stories from December (and probably will be prominent for the next few months/years).

But let’s not get carried away by the big picture yet — you came here to find out what was happening on social media while you were cozying up with eggnog and that’s exactly what I’m going to tell you. Let’s go!

As a part of the ongoing battle against fake news on the platform, Facebook announced a new experimental fact-checking program. Basically, a group of independent contractors will try to identify fake news by looking for sources that disprove them. The program was developed and tested in collaboration with YouGov, a global public opinion and data company. As stated in the announcement:

Note that community reviewers don’t have the power to delete certain posts: that decision is left to Facebook partners.

In the run-up to Facebook News launch, it’s likely that we will see even more efforts to fact-check Facebook posts. However, it is easy to question Facebook’s diligence on this issue since the company still shows no intention to fact-check ads on the platform.

The removal of politics-related spam accounts

Two big networks of Facebook and Instagram accounts that were engaged in spamming activities related to politics were identified and removed:

As explained by Facebook, here’s an example of what qualifies as ‘inauthentic behavior’:

The people behind this activity used fake accounts — some of which had been previously disabled by our automated systems — to increase engagement on their content and manage Pages. These Pages posed as news organizations and impersonated political parties, public figures, activist groups, and media entities.

What’s curious about the second case is that the accounts used AI generated profile photos. This could become a wide-spread tactic of platform manipulation in the future.

Twitter also undertook perhaps one of the largest efforts to remove malicious accounts yet. It removed 5,929 accounts originating from Saudi Arabia, which were part of a larger network of "88,000 accounts engaged in spammy behavior across a wide range of topics".

These profiles regularly asked users to "retweet" or "follow", which led to the creation of smaller sub-groups growing within the networks. Twitter also notes that there was "a substantial amount of automated “fluff” to make it hard to figure out what the accounts were focused on".

As you can see, both platforms had to deal with a lot more than just easily-identifiable spam accounts that repeat the same posts over and over. Spamming tactics are becoming more and more sophisticated, and it was proven time and time again that such tactics do influence people’s opinions — so social networks will have to get on their level and come up with even more advanced ways to prevent the abuse of their platforms.

Now you don’t have to manually go through all the membership requests for the FB Groups you manage! Facebook introduced a new feature that approves these requests automatically based on certain membership requirements that you set. You can choose one or several to be considered at the same time. Here are the requirements:

To turn on this feature go to Moderate Group, click on Automatically Approve Members, and set up membership requirements.

According to Bloomberg, Facebook is trying to negotiate new licensing deals with Universal Music Group, Sony Music and Warner Music Group, in order to secure the rights to include music videos on its Watch platform.

The current deals allow the use of companies’ properties in the background of videos uploaded to the platform but Facebook doesn’t have the permission to stream the official music videos that belong to these labels yet. Expanding the deals to music videos could make the platform more of a competitor to YouTube, while it could also look to offer better terms to rights holders, which could, potentially, also see Facebook hosting exclusive clips.

In December, Stories got a few new additions:

The Layouts tool allows you to add multiple images to one Story in the form of a collage. Instagram offers several types of grids you can choose from to organize your photos.

Strike a pose. And another pose. And then another. 📸

With Layout, you can now capture and share multiple photos in your story — a new, creative way to express yourself. Check it out! pic.twitter.com/j02aYOjsoO

The Shoutouts feature offers several templates to give a heartfelt mention to your friends, for example, send them birthday wishes or thank them for something. When you give someone a shoutout, Instagram will automatically list down all your Stories together starting with your first mention till the most recent — reminds me a bit of Facebook’s Friendaversary.

Another option for Stories that just began rolling out in December is collaborative Group Stories. The tool enables you to collaborate on a private Story through Instagram group chats.⁣ 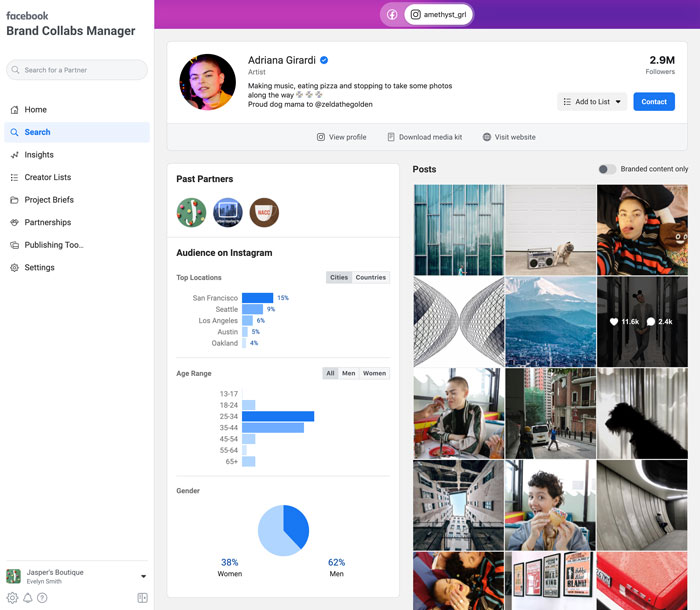 Facebook is planning to make influencer marketing on Instagram a bit easier. Of course, Brand Collabs Manager is not a new thing — it was available for Facebook before and last month it expanded its functionality to Instagram.

Essentially, it’s a marketplace tool, a database of brands, that Instagram creators can use to find opportunities for collaboration. The tool allows creators to share activity and engagement insights with brands and find partners that will resonate with their audience. As explained in the announcement:

Creators in Brand Collabs Manager can search for like-minded brands looking to partner on content creation. They can source new deals, manage partnerships, and automatically share insights with them (before this, many creators could only send brands screenshots of their analytics).

We’ve also made it possible for brands to see insights when they’re tagged in branded content in both Brand Collabs Manager and the Instagram app. Because influencer networks remain a critical part of branded content, we’ll continue to support their access to the Instagram Graph API.

Influencer marketing on Instagram has recently become a topic of concern since Instagram might be planning to get rid of vanity metrics — which means that brands will have fewer opportunities to evaluate creators' profiles and predict which creators will be beneficial for them. Brand Collabs Manager could become a solution to that problem.

Currently, only a select group of creators have access to the tool and it’s unclear when to expect a wider rollout. 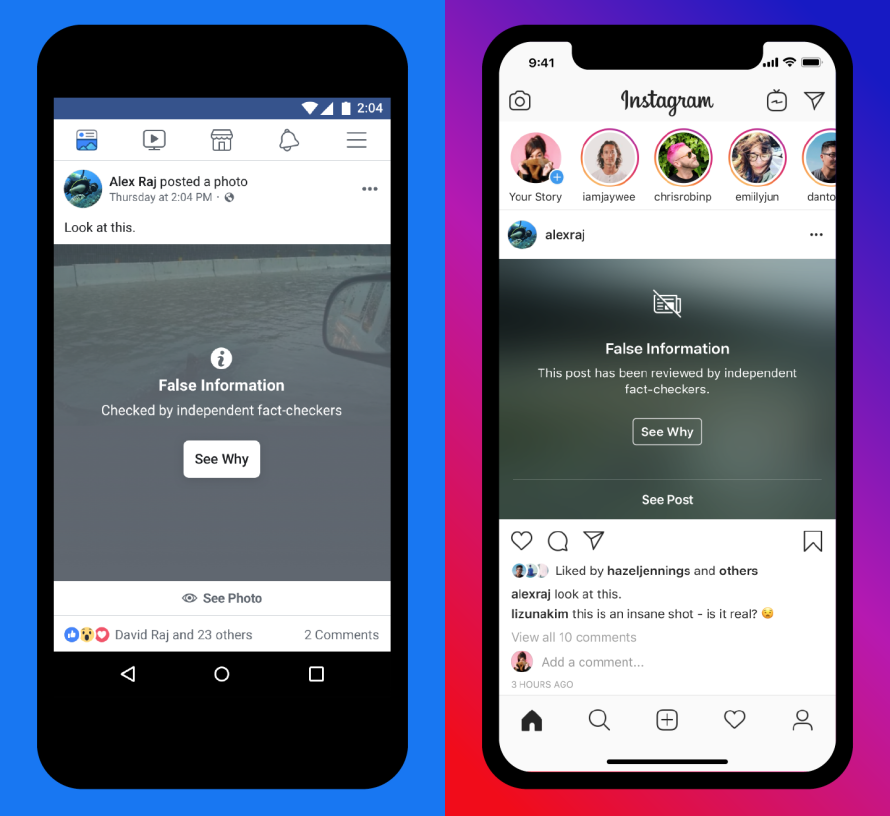 Instagram cleared up the fact-checking process they recently introduced to combat misinformation on the platform.

The platform uses user feedback and machine learning to discover potentially false content. Third-party fact-checking organizations around the world assess posts and can rate them as false or partly false. Instagram then reduces the reach of such posts by removing them from the Explore tab and hashtag search and adds labels to notify users that the content was flagged as false. The label will link out to the rating from the fact-checker and provide links to articles from credible sources that debunk the claim(s) made in the post. The content from accounts that repeatedly receive these labels will be removed from the Explore tab and hashtag pages.

In December, Twitter announced that they had fixed a security issue that could give access to your DMs, protected Tweets, and location information or control over your account to bad actors. However, it’s unlikely that your account was affected. As Twitter stated in the announcement:

We don’t have evidence that malicious code was inserted into the app or that this vulnerability was exploited, but we can’t be completely sure so we are taking extra caution.

The people that might have been affected were contacted by the Twitter team. The company also recommended updating the app on Android to its newest version to make sure you have the fixed app.

As discovered by social reverse engineer Jane Manchun Wong, Twitter is developing Facebook-style reactions to direct messages. However, the ETA is still unclear.

On his Twitter, Jack Dorsey announced the establishment of a new team in the company - called bluesky - which will be tasked with examining the potential of "an open and decentralized standard for social media". The platform could be built on blockchain technology allowing for more inclusive collaboration solutions especially when dealing with misinformation, productivity of the discussion, moderation, and algorithm recommendations.

Twitter is funding a small independent team of up to five open source architects, engineers, and designers to develop an open and decentralized standard for social media. The goal is for Twitter to ultimately be a client of this standard. 🧵

Of course, there are several decentralized social networks that already exist, Mastodon being the largest. But with Twitter’s popularity and resources, the company could come up with something completely new — perhaps, something not as prone to becoming a lawless no man’s land like some other decentralized networks.

Years pass, seasons change, and LinkedIn is still trying to make LinkedIn Groups make a comeback. Last month the company announced several updates that are supposed to make Groups more appealing to users. Here is the list of new features they introduced:

The changes are quite small, but they all make for a better user experience which might bring more people to finally get involved in groups.

‘Swipe up to call’ ad option 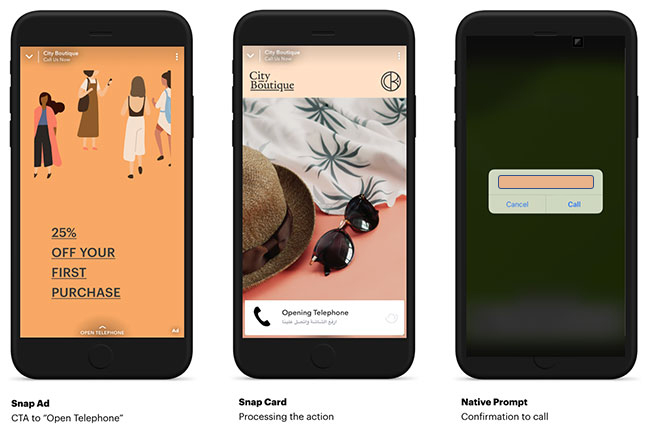 Middle East advertisers can now encourage Snapchat users who see their ad to call them in one swipe. Snapchat has added a new option to its 'Swipe Up' ad tools, which enable you to go to a website, see a video, or install an app by swiping on a Snapchat ad.

The choice of geographical location for the rollout was explained by the popularity of phone calls in the Middle East. For those who have access, 'Swipe Up to Call' ads will be available in Ads Manager via the Calls and Text option in Advertising Goals.

The new tool from Pinterest provides insight into the most popular search terms on the platform over the preceding 12 months, as well as data on when the top searches peak throughout the year similarly to Google Trends.

As of right now, Pinterest Trends is in limited beta, with Pinterest planning to make it more widely available to users in the US in the future. You can request your early access here.

And that’s it for the December news — as you can see there were not that many, but they tell us a lot about this year and where social media companies are heading. Do you think social media platforms will be able to handle misinformation? Are you convinced by LinkedIn’s efforts to make groups better? How were your holidays? Let’s talk in the comments!