September was about getting the long-rumored (and short-rumored, looking at you, Facebook) updates. Social media companies also announced lots of new tools that could make lives of social media managers more interesting in every way from content creation to ad management.

In general, last month was surprisingly more quiet than usual (Facebook didn't even get involved in any new scandals), but we still gathered the most exciting and important social media news in our roundup!

We're aware that @jack was compromised and investigating what happened.

At the beginning of the month, a hacker group managed to tweet out some offensive messages from Dorsey's accounts through texting. As explained by Twitter:

The phone number associated with the account was compromised due to a security oversight by the mobile provider. This allowed an unauthorized person to compose and send tweets via text message from the phone number. That issue is now resolved.

Subsequently, Twitter temporarily limited the ability to tweet through SMS to be able to investigate this issue properly. Since the hack was made possible by a phone provider and not Twitter's internal security flaws, perhaps the company will have to revise its policies on tweeting via texts to solve the problem.

'Hide Replies' feature is available in the USA

We've already reported before that Twitter is experimenting with the ability to hide certain replies to your tweets and last month they rolled out the feature to the US and Japanese users.

As per Twitter, during the tests of the feature, they found out that:

To hide tweets, all you need to do is click on the drop-down menu and choose Hide reply. To view the replies that the author of the tweet chose to hide, click the icon at the right corner of the tweet. 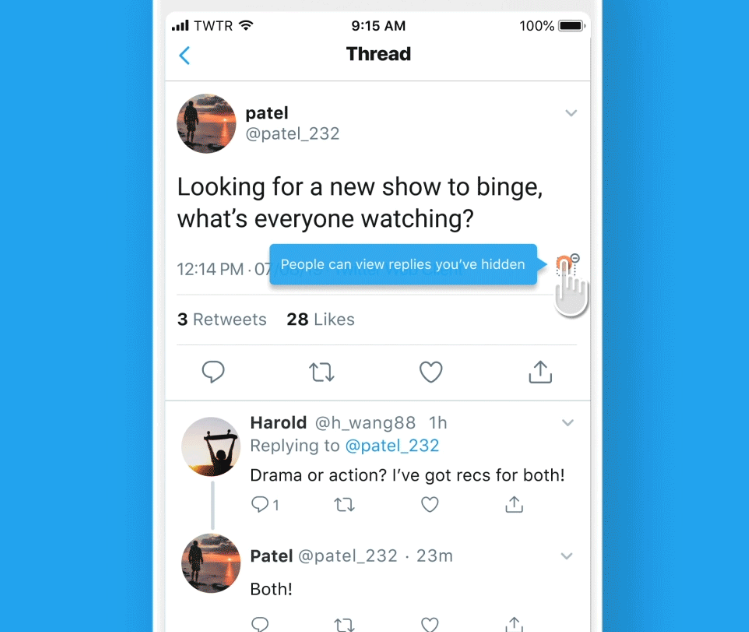 The second-to-last one would allow you to go straight to your bookmarks, and the last switches you to lists.

In addition to this, Navarra also noted that Twitter is testing out a quicklink to list creation within the Lists tab. Another innovation is the 'Topics' sidebar, also giving you a new way to filter the content you see. 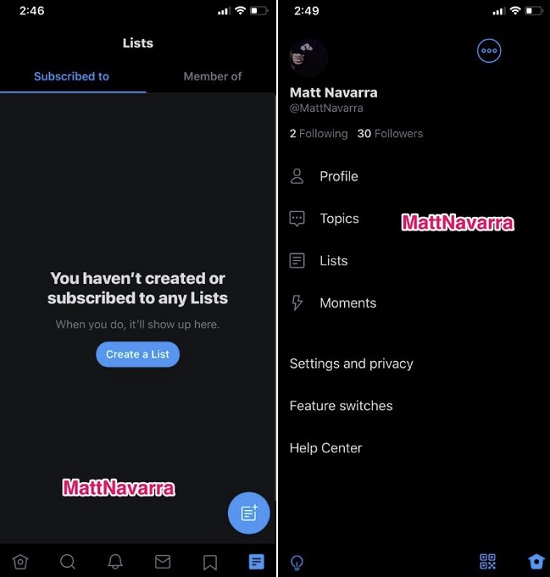 Previously, Twitter had an idea to make lists just a swipe away from your Home feed — which option do you prefer?

Twitter has been working on its messenger for quite some time: adding filters for inappropriate messages and a search option. Last month the company was reported to be working on simplifying the search for the content shared in the DMs.

'Shared Content' feature takes you to a listing of all the various things that have been shared between those people, or within that group, in private. 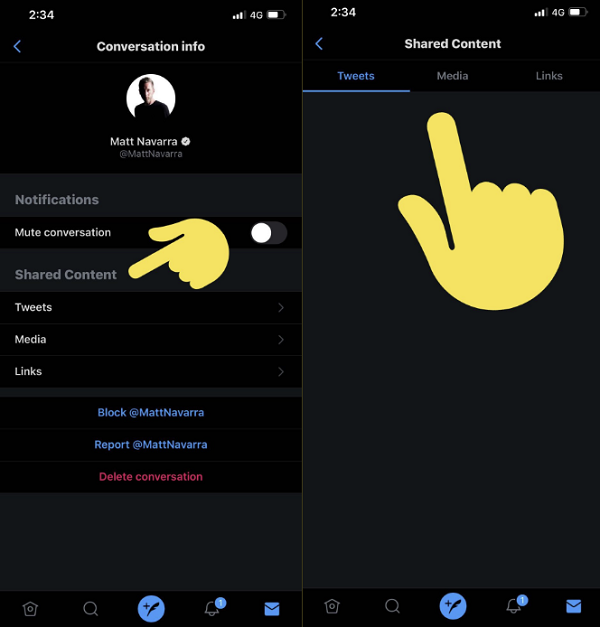 It could be useful for finding the important links or media shared with your friends a while ago.

So usually we first get some rumors about the test social media companies are doing and then, in a couple of months, we actually see some changes on the platforms, but not this time. Last month reverse engineer Jane Manchun Wong reported that Facebook might be experimenting with hiding like count, Instagram-style.

And just at the end of the month, Facebook confirmed to TechCrunch that they are starting an experiment with Australian users.

Just as with Instagram, this move is motivated by the idea that like count is harmful to users' mental health - which in fact might be true. Nevertheless, on Instagram, you can still see the full Like listing on any post - your own or from others - you just can't see the total number.

Last month the company announced a bunch of new features for public figures (spoilers: some of them could be handy for brands as well). Most of them are centered around Facebook Stories, which confirms Facebook's focus on Stories posts. Here's the list:

Facebook Live. Facebook is finally adding Live rehearsals so that Pages can broadcast their Live videos to Page admins and editors only before actually going live for their audience. You'll also get Trimming option for Live broadcast replays to cut out the beginning and the end of live videos — the moments when you usually just awkwardly wait for everyone to show up. In addition to that, if you use Live API, you're now able to stream for 8 hours (as opposed to 4 hours previously) and stream simultaneously to more than one online streaming service.

Watch Party. Facebook added Watch Party scheduling, which generates an announcement post where people can opt-in to be notified when the Watch Party begins. You'll also be able to replay Watch Parties with all the related discussions generated within the Party. Pages will be able to tag business partners in branded content Watch Parties "so that both parties can see insights on the performance of the Watch Party". Moreover, Facebook is adding two new metrics for Watch Parties in Creator Studio: Minutes Viewed and Unique 60s Viewers (shows the total number of unique users that watched at least 60 seconds in a Watch Party).

As with every great Instagram feature, Facebook has plans to incorporate some version of Join Chat sticker into its feed. According to Jane Manchun Wong, Facebook is working on a post which would funnel users into a Messenger chat. 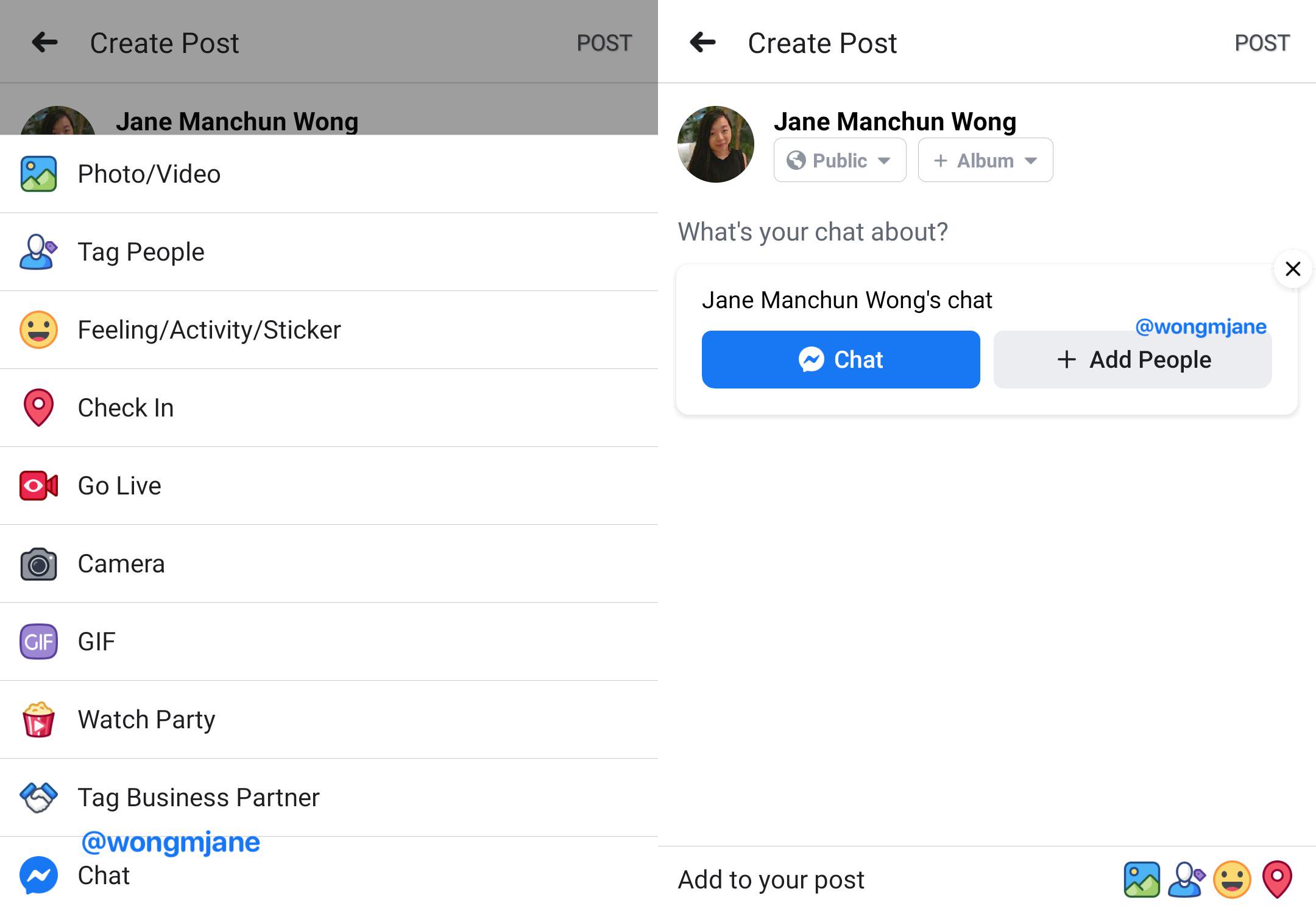 Given Facebook's focus on private communication, this seems like a handy feature that could be used to convert your Facebook followers into leads (or simply for community engagement).

Instagram is testing the ability for businesses to run organic shopping posts as ads within Ads Manager.

The test will run over the next few months, with plans to build and test the incorporation of a checkout option into these ads, enabling people to complete purchases without leaving the Instagram application.

According to recent research by VidMob, 1/3 users buy directly from Instagram ads, and with this new feature this number can only grow.

This wouldn't be the first time Instagram "took inspiration" from another social media company — Instagram Stories, one of its most successful features, was clearly lifted from Snapchat. This time Instagram is trying to get some of TikTok's recent success.

Reverse engineering expert Jane Manchun Wong discovered that the company is working on a new, TikTok like tool called 'Clips'. As she explains:

Instagram is working on “Clips”, a Story Camera feature “inspired” by TikTok

I have a mini surprise in my new blog: https://t.co/wOGfCOlQCg pic.twitter.com/pAd7NHA5nJ

YouTube is not an often guest in our roundups. To be completely honest, I still don't know how to feel about YouTube — it's a social media network but it feels much more like a content platform. And to be honest, apart from regular changes in monetizing policies, YouTube doesn't announce many updates. However, last month was different!

The issue of verification

Last month YouTube "broke the Internet" by announcing that they were updating their criteria that make accounts eligible for verification and subsequently some verified channels would lose their badges. This made a lot of content creators upset.

On vacation and I get an email from #Youtube saying they are taking away my #verified status.

Now, I know lots of others got this, and I dont make YouTube videos for the ego boost, but I'm just tired of seeing YT take jabs at the creators that helped make their platform.

YouTube eventually backtracked on the criteria changes just 24 hours after the announcement so all in all, no-one's verification status is being taken away. But some changes will still go into effect in October as well as a new design of the verification badge.

New requirements for verification include: 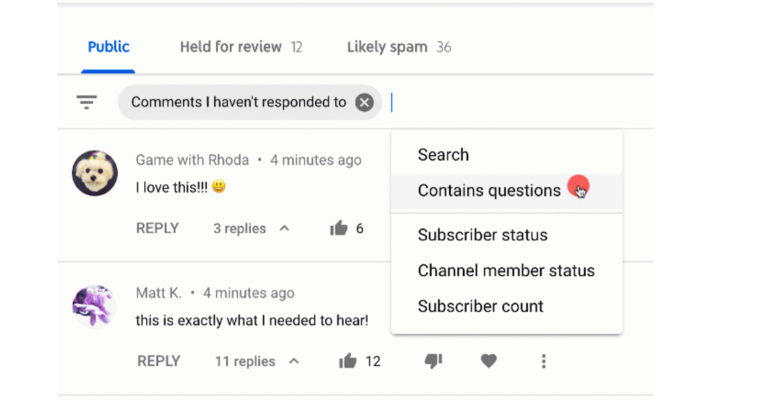 Creators can now filter comments by:

These filters can also be combined to narrow down comments even further. To access the filters, go to YouTube Studio, navigate to the ‘comments’ tab and use the filter bar at the top of the page.

What do you think about Facebook's strategy to copy what they can't buy? Will you be hiding replies to your tweets? And most importantly, do you share my views on the ambiguous status of YouTube as a social media platform (please, tell me I'm not alone)? Let's talk in the comments!