Greta Thunberg vs. the World: a social listening study

If you’re looking for a sure-fire debate starter, try bringing up Greta Thunberg. Although the climate activist is far, far from some of her fellow Time magazine’s Persons of the Year in terms of the chaos inflicted upon the world, Greta is just as controversial of a figure.

She’s praised, condemned, straight-up bullied, and then celebrated again — all within any given day. Whatever she’s up to, people are talking. So much so, that understanding what the public really thinks of Greta Thunberg becomes somewhat of a mission impossible.

Luckily, whenever the human eye fails to grasp the truth, we have unbiased social listening technology to turn to. With powerful social media monitoring and analytics at our service, you wouldn’t expect us to miss out on inspecting the Greta phenomenon, would you?

And we’re here to deliver! We put Awario to what might be one of its best uses to date and started tracking every mention of Greta Thunberg on social media, news, forums, and the web. We were then able to delve into hundreds of thousands of mentions of Greta (and not lose our minds) as Awario did all the analytical work and turned heated conversations into cold facts.

Let’s not waste any more time on the introduction and save our energy for climate action as Greta would want us to. Jumping right on what we found out in 3,2,

We set Awario to track all mentions of Greta Thunberg in October 2019, and to this day the sentiment of mentions within any given 30 days is mostly negative.

Awario’s sentiment analysis functionality allowed us to monitor fluctuations in the tone of Greta-related conversations over time. What we observed wasn’t too reassuring.

Even in the merriest of Christmas times, the climate activist received more bad wishes than good ones, as she was announced Person of the Year by Time magazine. The announcement also corresponds to the highest spike in mentions over the course of the entire study.

Reflective of the spike in mentions, Greta’s reach across all social media and the web amounted to over 10 billion impressions during 9-15 December 2019. To put that into perspective, the overall reach for the duration of our study (over 3 months) was 43.3 billion impressions.

A quick look at the sources of mentions revealed the biggest host of Greta-related conversations — Twitter. Throughout our research, the platform roomed some 650K mentions, boasting the biggest share of all Greta Thunberg buzz. 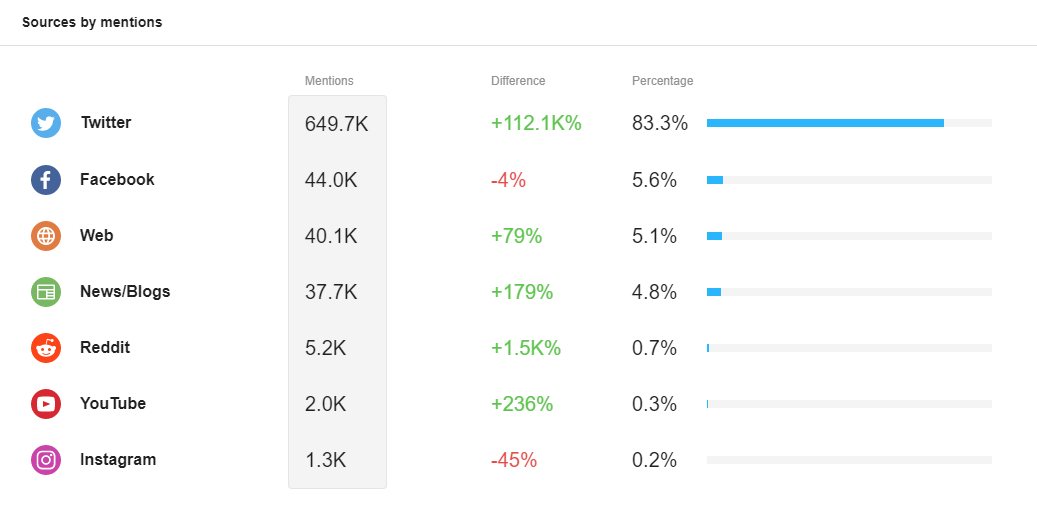 For better or for worse, news and the web came long after, giving way to Facebook. Instagram turned out to have the lowest amount of users concerned with Greta, with only 0.2% of all mentions.

On Twitter, meanwhile, the climate activist got the most coverage from influential mass media: during the 3+ months of our study, Greta was featured anywhere from 2 to 26 times by each of the biggest media outlets. 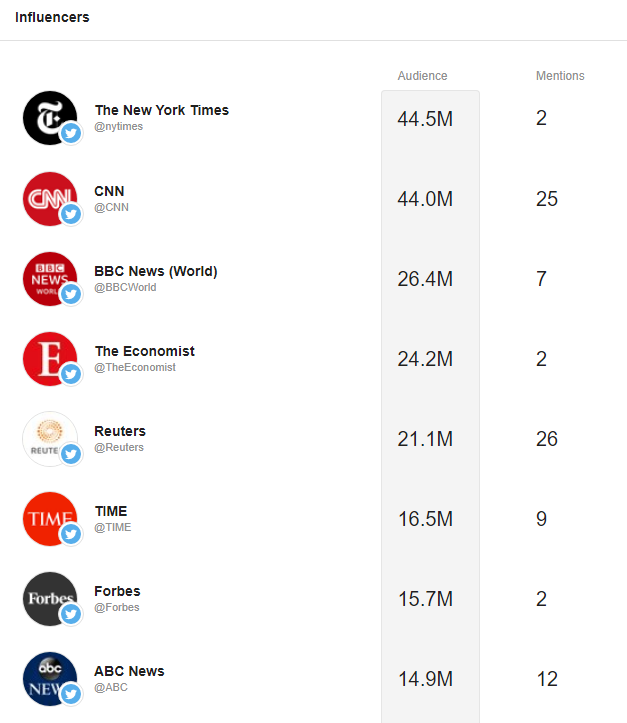 Big names and small alike, the climate activist got everyone talking. Let’s talk some more and try to understand the Internet that tried to understand Greta Thunberg.

3. Internet is obsessed with Greta

Don’t take my word for it — look at what social listening analytics shows. With a reach of 43.3 billion in a little over 3 months, there’s virtually no way to escape the Greta buzz. If you’re on the Internet, chances are, you’re either thinking or talking about the climate (activist) more often than you’d like to.

Part of the reason the Internet is obsessed with Greta is that she brings along all kinds of issues and names interesting to the public as is. Let’s look at the word cloud for the Greta Thunberg alert to see the contexts behind her mentions. 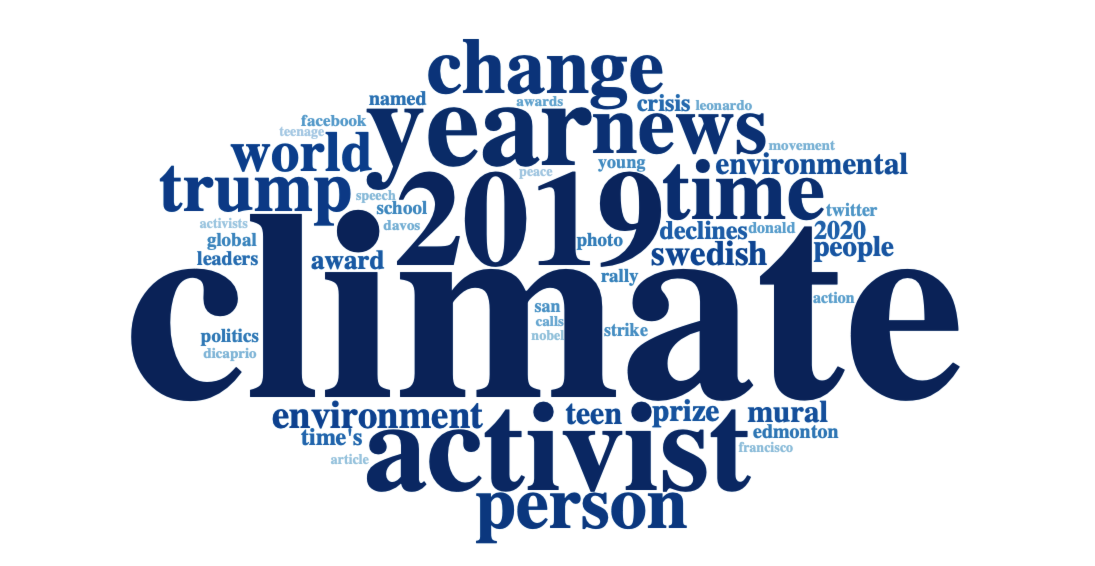 Quite predictably, the context featured the most was Greta’s recognition as Person of the Year by Time magazine. Even less surprising, the activist’s biggest opponent and fellow Person of the Year — Donald Trump — managed to make a heavy appearance, crowding Greta even in her own word cloud.

Among the names featured in relation to Greta Thunberg is another colleague of sorts. Leonardo DiCaprio, a fellow climate activist, made more waves by teaming up with Greta than with any other young woman he befriended over the years.

. Leonardo DiCaprio Gushes over ‘Leader of Our Time’ Greta Thunberg. ? gush away, Leo, better sit on your wallet... hey! you two can use your private plane!
?????? https://t.co/ZBKxi9aLOq

Some things will never make much sense. Point remains, Greta Thunberg is both a giver and a beneficiary of others’ visibility, and the public can’t seem to get enough.

In addition to being the youngest Person of the Year, Greta Thunberg might be the youngest person to truly break the Internet. Every other Greta-related discussion online can go whichever way, as social media users are jumping on and off team Greta.

Saw a mural of greta thunberg in a small country town in Nowhere-Australia ❤️?

One and the same statement or move triggers completely opposite reactions across the public — as a result, Greta gets contradictory coverage of whatever she’s up to.

"I know you don't want to talk about this. But I assure you, I will continue to repeat these numbers until you do."#ClimateEmergency #Davos2020 pic.twitter.com/rRQXfmCWr6

I see the brainwashed, illiterate
Greta Thunberg is speaking at the Davos conference...
Why anyone listens to this petulant moron is beyond me. In fact....
does anyone actually listen anymore.
(Oi, Thunberg... stop travelling around the world creating CO2 and get to school!) pic.twitter.com/mMrkujiM21

It seems like every Greta-related conversation goes into dog-eat-dog mode at one point or another. Heavy accusations fired from both sides, social media turns into a battlefield, with no ceasefire prospect on the horizon.

If there’s one thing featured abundantly both by Greta Thunberg’s allies and adversaries, it’s her age. After all, how often do we get a prominent teenager trying to talk science and sense into world leaders?

It’s not only Greta’s current age people on social media don’t miss a chance to highlight. All kinds of speculations appear on social networks and the web regarding the activist’s (and the planet’s) future.

There’s no way to tell how soon we’ll feel like we’ve had enough reminders of Greta Thunberg’s age, current or otherwise. Good thing is, we’re getting there.

If the internet is correct (lol) then Greta Thunberg was 17 on the 3rd January. (Happy Birthday.)

What's the bet they don't mention her age anymore?

For a figure so public and so controversial, there inevitably comes a time for social media to go into full-on conspiracy mode, unbarring all our deepest hopes and fears.

Turns out that Greta Thunberg is a Time Traveller after this 120 year old pic turned up today of the activist, pictured here in Canada's Yukon territory way back in 1899. What about that then? pic.twitter.com/Xi5bVlsP9w

With conspiracies piling up, people are asking questions. Some of them are so telling that the focus is immediately shifted from Greta Thunberg and onto the person posing the question.

"Could cell phone use at a young age explain Greta Thunberg's indoctrination into the climate cult?"

Dazed and confused, social media users are looking for answers. One minute Greta’s a “child” in need of school and parental attention, another — she’s an “adult” expected to stand up to world leaders, challenging the activist and demanding that she is held responsible for her words.

But why are so many middle-aged/old men obsessed with being rude to/about Greta Thunberg?

The biggest mystery so far is whether or not we’ll ever find peace with Greta Thunberg or ourselves. For now, there are definitely more questions than answers.

In more ways than one, Greta Thunberg is a phenomenon. Regardless of the context her name appears in, the change she stands for is happening across continents and political beliefs. And isn’t that what her activism is all about?

I'm not gonna go all greta thunberg but how hard is it to fucking recycle? Like do it properly. Reuse plastics, Rip up your plastic rings that encase your beers, use your food waste as compost, dont buy a new bottled water just use the same one, it's really not that difficult.

OK, call me Greta Thunberg, but I think I’ve come up with a way of genuinely helping the environment.. listen to this: A massive sign above every supermarket entrance in the world that reads: “YOU’VE LEFT YOUR BAGS FOR LIFE IN THE CAR AGAIN, YOU NOB”.

Upon a closer look at the world, we find Greta Thunberg not necessarily opposing it, but rather in its reflection. You’d be surprised to know how many social media users identify themselves with the activist. There’s likely a Greta somewhere at your workplace or even in your family. Ultimately, there’s Greta potential in each and every one of us.

Channeling your inner Greta doesn’t require sacrificing your entire way of living. Nobody enjoys drastic changes. But some things just make sense and don’t mean giving up on your comforts. After all, living more consciously and making better choices for you and the planet is within your reach, one step at a time.

So next time you’re debating getting a new, much needed, 15th sweater or that 5th disposable cup of coffee for today, stop and think for a moment, What would Greta do? 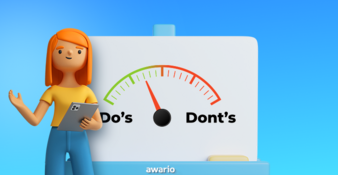 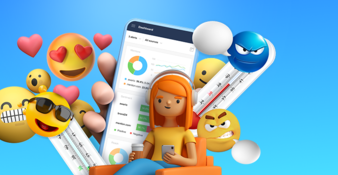