Battle of the Kardashians: the most popular sister on social media

Social media instigated an outburst of people famous for nothing, celebrities who are well-known just because. But the OGs of this was the Kardashian-Jenner clan. The question “Why are Kardashians famous” is one of the most common Google searches about the family. 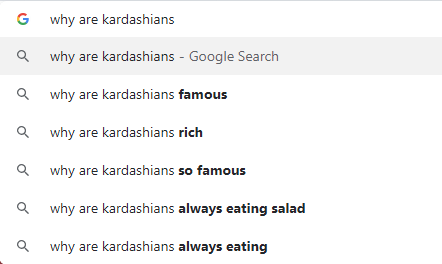 It’s true that Kardashians had been the poster children for “famous-for-nothing” phenomenon long before social media became so ubiquitous. And they successfully integrated into our social media era, being among the most popular women on Twitter and Instagram right now. But which one of them is the biggest darling of social media? Let’s find out!

Where it all started

“Keeping up with the Kardashians” launched the Kardashian-Jenner clan into stardom. Prior to that, the only publicity around the name was generated due to the fact that Robert Kardashian, the father of the Kardashian sisters, was O.G. Simpson’s lawyer.

The show that aired in 2007 was emblematic of the late 00s TV and the popularity of reality television. By comparison, Facebook and Twitter went public in 2006, and Instagram didn’t even exist yet. A lot can change in 12 years, but Keeping Up With the Kardashians still remains a major pop culture phenomenon. Since the beginning of this summer, the show has gathered more than 20.7 thousand mentions with the reach of 3.8 billion.

Mentions of Keeping up with the Kardashians. Screenshot from Awario

Reach of mentions of Keeping up with the Kardashians. Screenshot from Awario

What is the most surprising is the sentiment around the show — it is overwhelmingly positive. You wouldn’t expect this from a program the whole premise of which is built on drama.

Sentiment of mentions of Keeping up with the Kardashians. Screenshot from Awario.

If we look at who talks about the show, we'll see that a lot of mentions are generated by Twitter users and blogs and forum readers.

Mentions of Keeping up with the Kardashians by platform. Screenshot from Awario.

As for media analysis, here are the news sites that are dominating the conversation. 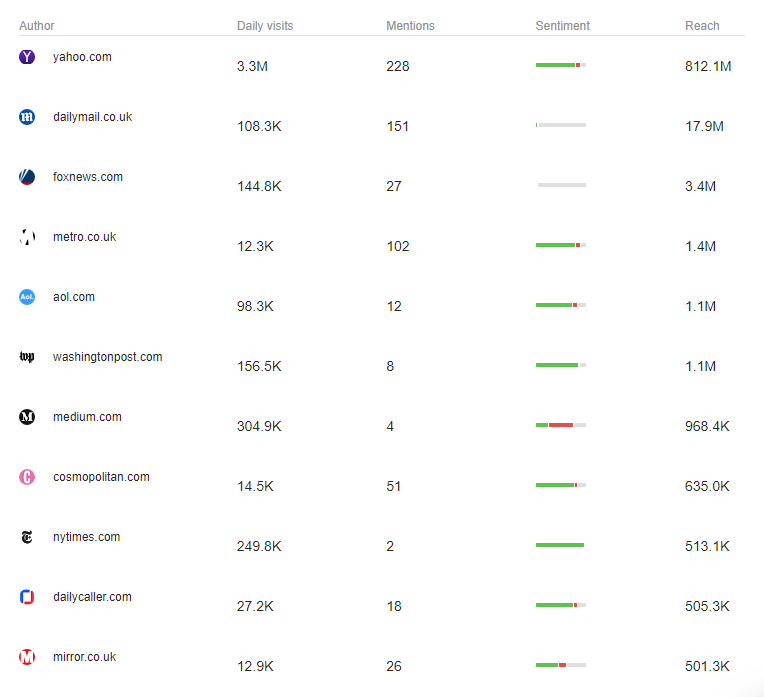 News sites with the most mentions of Keeping up with the Kardashians. Screenshot from Awario.

Along with predictable publishers that focus on celebrity gossip, there are several “hard” news media on this list. Interestingly enough, the show’s host network E! didn’t make the list.

We monitored mentions of the Kardashian-Jenner sisters since the beginning of summer (52 days by the time I’m writing this blog post). The goal was to understand how relevant their personal brand is in 2019 and to find the most popular sister. Kim, Kylie, and Khloe made our top 3.

Share of voice for mentions of Kim, Kylie, and Khloe. Screenshot from Awario.

Share of reach for mentions of Kim, Kylie, and Khloe. Screenshot from Awario.

Kim is an undisputed leader out of all the sisters, which comes as no surprise — she’s a pop-cultural icon. How many parodies of Khloe Kardashian are out there? Surely fewer than recreations of the famous champagne photo.

When you look at the mentions graph, your eye immediately goes to the spike on July 1st. If we go to Mentions feed and look at the mentions from the first of July, we’ll see that overpowering majority of mentions are centered around Kim’s launch of Kimono shapewear and its controversial name.

Even though the word backlash was used a lot in conversations around the shapewear line, the sentiment of Kim’s mentions wasn't completely negative.

Sentiment of mentions of Kim Kardashian. Screenshot from Awario.

The decision to change the name of shapewear even generated a slight increase in positive mentions, while the announcement of said shapewear caused the number of negative mentions to surpass positive.

The main topics for Kim at the moment are Trump and A$ap Rocky, since she and her husband made the news by appealing to the president of the United States to help get the rapper out of Swedish jail.

Speaking about Kim’s husband, he and Kim are a true power couple and are always in the public eye. Since both are pretty extravagant figures, they generate a lot of discussion around them (33.6 thousand since June 1st to be exact). The conversations around the couple tend to involve other people too: A$ap Rocky again, their newborn child Psalm, and Taylor Swift.

Topic cloud for mentions of Kim Kardashian and Kanye West. Screenshot from Awario.

Forbes recently put Kylie on the cover as the youngest billionaire in history, so it comes as no surprise that she takes the second place.

The conversations around Kylie were mostly about her new skincare line, as well as personal drama with her friends and the baby’s father. She also caused a minor uproar when she hosted a Handmaiden’s tale themed party, which many people saw to be in poor taste considering the grave tone of the series.

Topic cloud for mentions of Kylie Jenner. Screenshot from Awario.

I still can't get over the fact that Kylie Jenner threw a party with The Handmaid's Tale as a theme. That might actually be the most ignorant thing I've seen all year. Someone get her a life coach with some sense and a lengthy book list.

Khloe is the youngest of Kardashian sisters and perhaps is not as famous as Kim, but she still managed to land in the third place.

The number of mentions her name generated could be attributed to two things: she celebrated her birthday on 27th of June (and, as you see, that’s where the mentions peak) and she was right in the center of an old-fashioned scandal, the nature of which is quite clear from this topic cloud.

Topic cloud for mentions of Khloe Kardashian. Screenshot from Awario.

(In case you weren't following the news, her husband cheated on her with Kylie’s friend Jordyn Woods)

Perhaps because of all the birthday wishes and support after this betrayal, Khloe got one of the highest numbers of positive mentions out of all the sisters.

Sentiment of mentions of Khloe Kardashian. Screenshot from Awario

Kendall is considered the least public person (if this concept is even applicable to Kardashian-Jenner family), which didn’t prevent her from generating more than 70 thousand mentions.

She might be the least scandalous sister as well — even the spike in mentions on July 9th was caused by her doing a #BottleCupChallenge, the latest in a series of Internet’s crazes.

Kourtney is the eldest sister and perhaps for that reason, she doesn’t stir up much online buzz.

The mentions with her name typically judge her fashion, not her life choices.

Topic cloud for mentions of Kendall Jenner. Screenshot from Awario.

The sisters know how to turn their popularity into profit, and I’m not even talking about all the sponsored social media posts they do (which cost A LOT). Most of the Kardashian-Jenner sisters started their own businesses, and, as you already saw in the analysis of social listening data, their new launches cause quite a buzz.

The most successful businesswomen are probably Kim and Kylie. Both own incredibly popular makeup brands — but which one is loved more by the public?

Share of voice for mentions of KKW Beauty and Kylie Consmetics. Screenshot from Awario.

Seems like Kylie deserved her billion: Kylie Cosmetics is evidently more popular on the Internet than Kim’s brand. Both brands recently introduced new products: Kim’s body makeup vs Kylie’s skincare line, and it seems that people are more excited to care about the skin on their faces.

Topic clouds for mentions of KKW Beauty and Kylie Consmetics. Screenshot from Awario.

Interestingly enough, Instagram was the only place where the reach of KKW Beauty beat Kylie Cosmetics, and I think I know why — skincare, however good it is, will never look as impressive as body makeup swatches, and Instagram being a visual medium gives an advantage to visually impressive media. 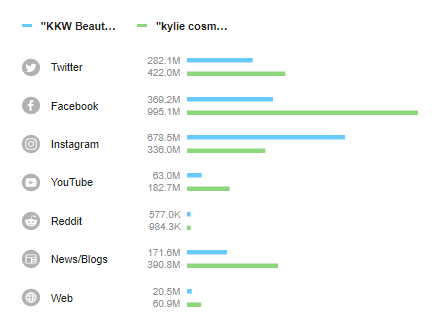 Mentions of KKW Beauty and Kylie Consmetics by platform. Screenshot from Awario.

It’s been more than 10 years since the Kardashian family became a pop-cultural phenomenon and most of them still manage to stay relevant today. They do it by jumping on hot issues, making some controversial decisions (perhaps, deliberately?) and simply sharing their personal drama with the world. Some of these tactics are very 2019, some are very 2007, but they obviously work just as well, so why not use them?