With this social listening study, we aimed to explore the social media presence of the top 20 UK universities (according to the 2020 ranking of the Complete University Guide).

We discovered how universities are perceived on social networks: how much people are talking about them, how good their reputation is, which topics are discussed most in relation to the universities, and which mentions become the most popular. The study also shows in which countries aside from the UK, these universities are being talked about by revealing mentions’ locations and languages.

To download the complete report with all findings and key takeaways, fill out the form below:

Best UK Universities According to Social Media
Fill out the form to get your free PDF report, complete with statistics, findings, and key takeaways.

The final ranking was done based on three metrics: number of mentions, mentions’ reach, and mentions’ sentiment.

Let’s first break down these metrics and see who the winners are in each category, and what it all means.

Share of voice shows which universities dominate the conversation on social media. This metric compares the number of mentions each university generates. This is the first metric to start with if you wish to measure brand awareness on social media. 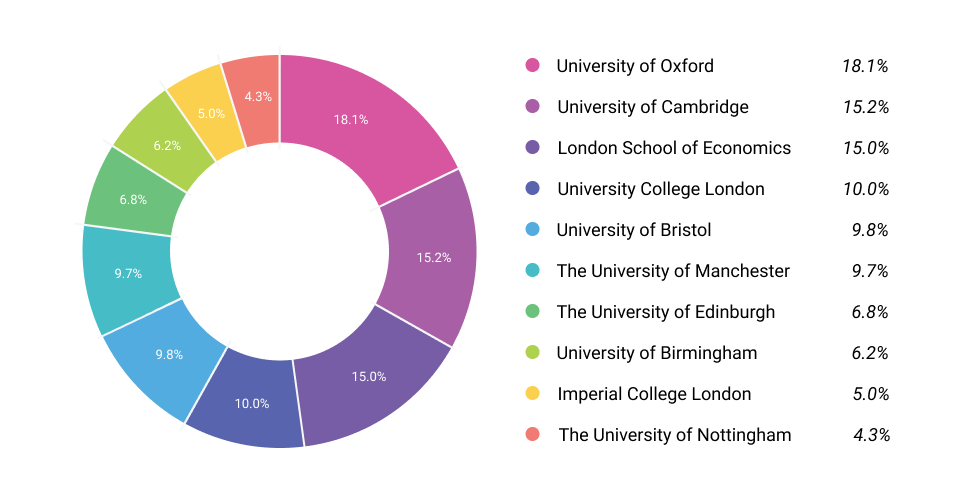 The winner of social media buzz turned out to be Oxford, followed by Cambridge and LSE. Note that despite being very high in the university rankings, St. Andrews, Durham, Lancaster, and Bath don’t get nearly the same level of attention on social media.

To understand the reach metric, you have to recall that social media authors have different levels of popularity. Imagine one post made by an introverted teen congratulating him- or herself on getting into Cambridge, and another one made by Elon Musk citing Cambridge’s research paper. Which one will get more reach? Yep, the second one. And that’s what we measure.

Keep in mind that the reach metric isn’t only about how many people see the posts, but also about how many times these people might see the posts. That’s why the final number is often very large: the same person is likely to bump into mentions of the same brand multiple times a day. 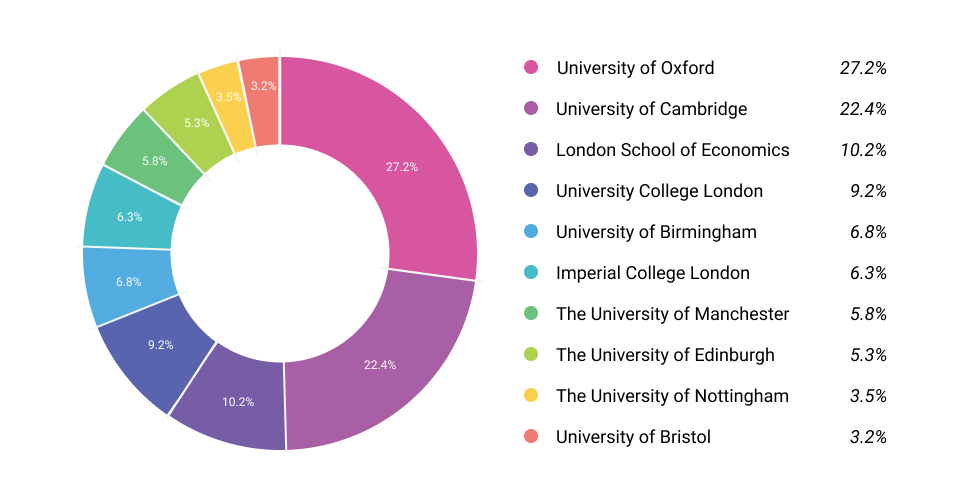 Reach metric for 10 UK universities with the biggest reach

The sentiment metric takes out positive and negative mentions from the data set of each university, and shows how they compare. Here are the five universities that have the best reputation on social media networks.

As you can see, St. Andrews that was neglected in all the previous graphs, now takes the first place. Seems like people don’t talk much about St. Andrews, but when they do - it’s all positive. Similarly, Exeter and Durham finally get featured due to their good reputation. The leaders of the previous charts aren’t only talked about the most - they are also criticized the most, so you don’t see them here.

The average number for sentiment across universities

Knowing the average sentiment across universities might help you benchmark your own results (if you’re a university). 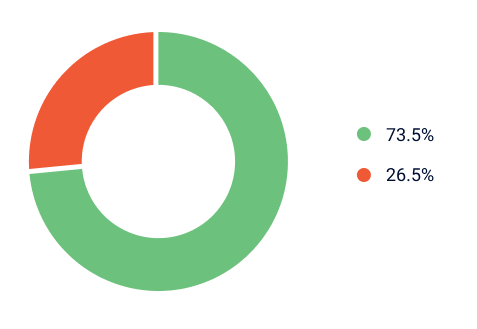 We also analyzed key themes within the whole data set, which reveals what people generally talk to when they talk about universities. We’ve only analyzed results in English and filtered out the universities’ names.

Key topics within the mentions of all UK universities

After finding out the number of mentions, reach, and sentiment for each university, we normalized the data and assigned a score of 100 to the university with the best result, and a score of 0 to the one with the lowest value. Then, we calculated the final social listening score using the formula: 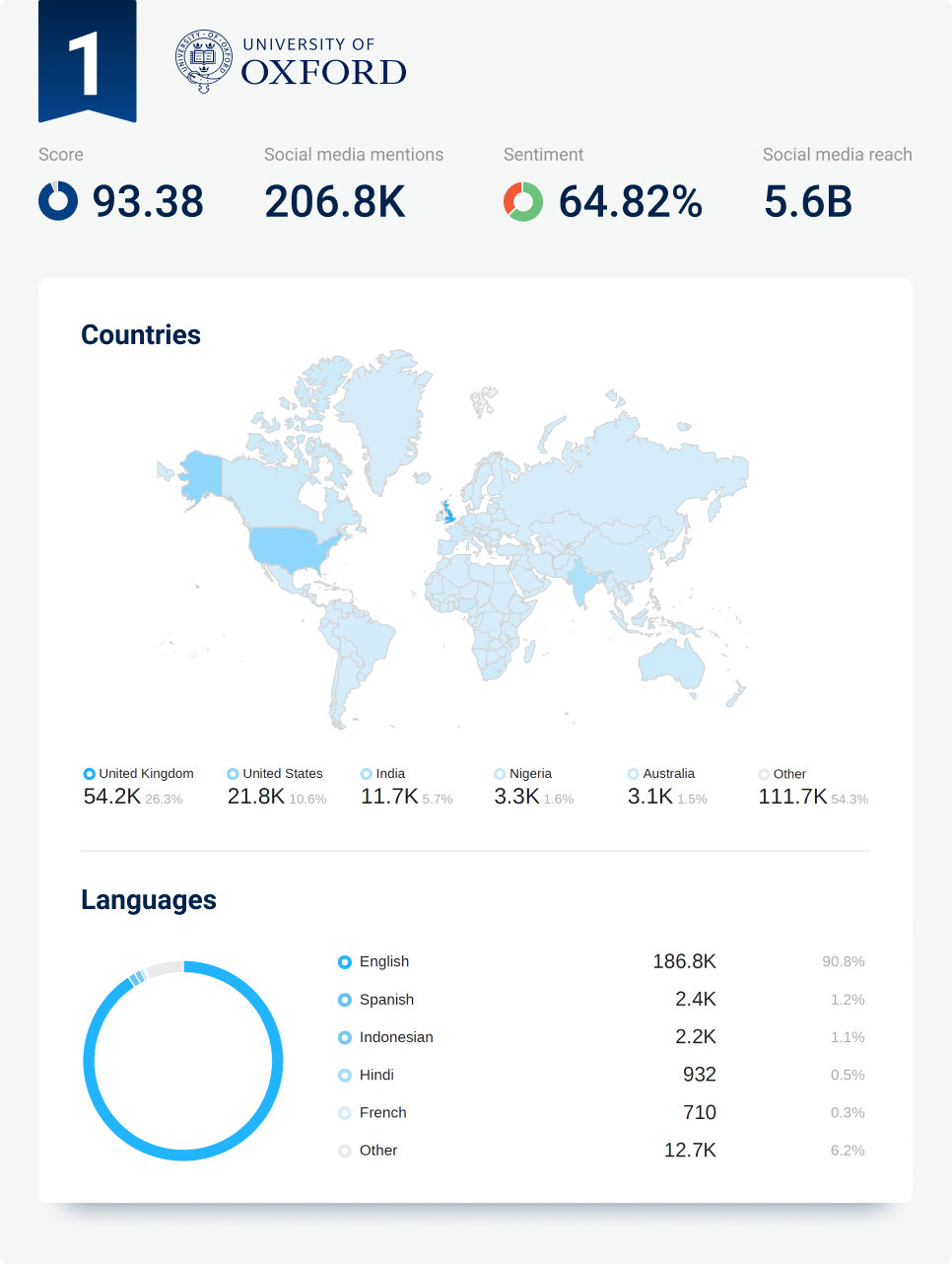 While Cambridge is usually first in terms of academic achievement, Oxford is the one to regularly make the news. Oxford students are believed to be more socially conscious, more artistic, and prone to inviting Nickelback for a visit.

Oxford has also found itself in the midst of a not-so-flattering news story which has played a part in creating the hype around the university.

Besides, an Oxford professor has recently made news by telling female students how to dress. Another professor created a patch infused with bacon to “help vegans cope with meat cravings”. And the university debating society has been criticized for its treatment of a blind student who was "dragged by his ankles" before being escorted from the debating chamber. And this is just some of the recent news. Isn’t Oxford Uni all about the hype? 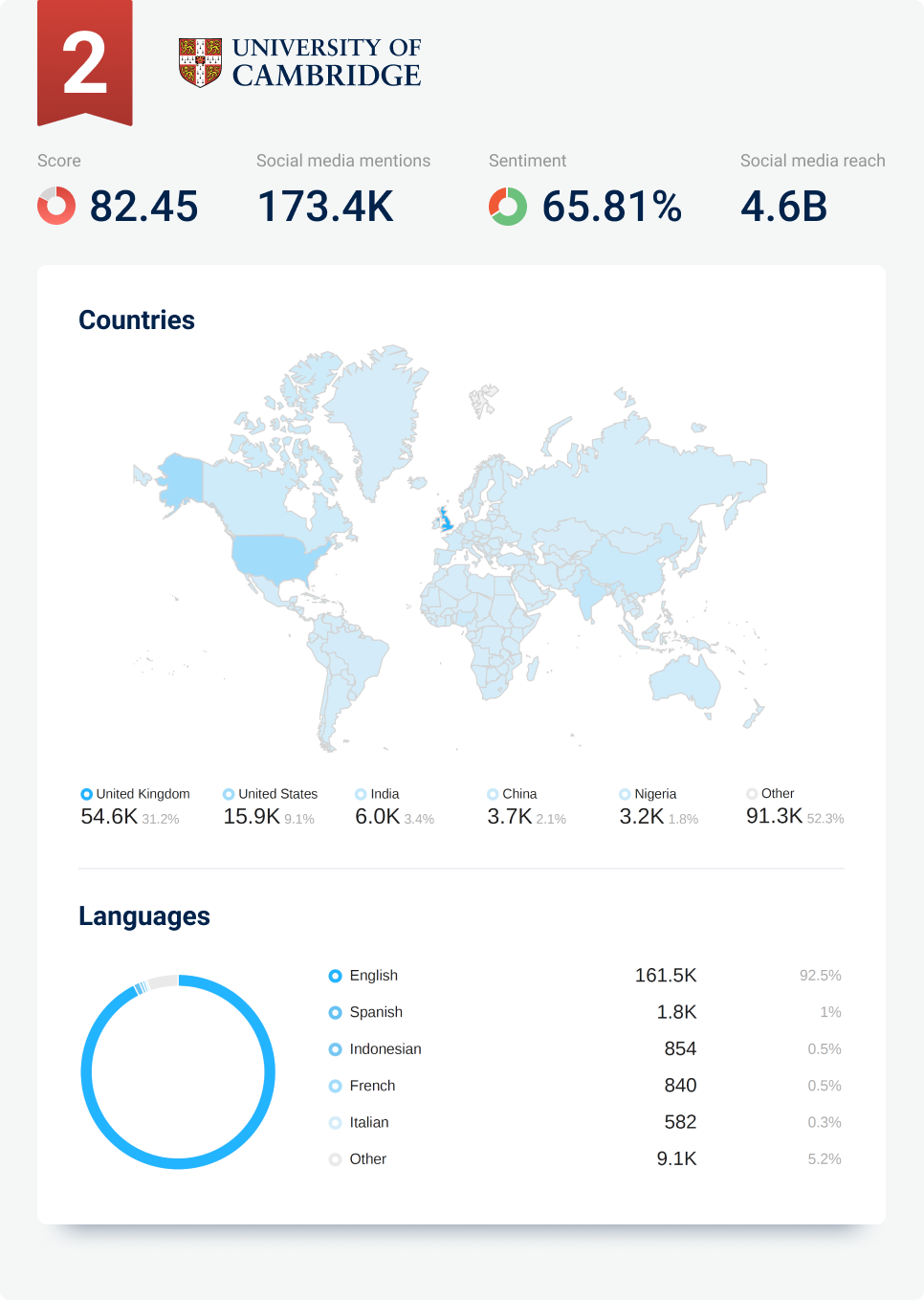 As you might expect, Cambridge appears a lot in the book-related and science-related mentions. For example, here’s a post by BBC News that has a reach of 49.5 million: someone returned a library book 60 years too late.

Other notable mentions include the post from the singer Dua Lipa 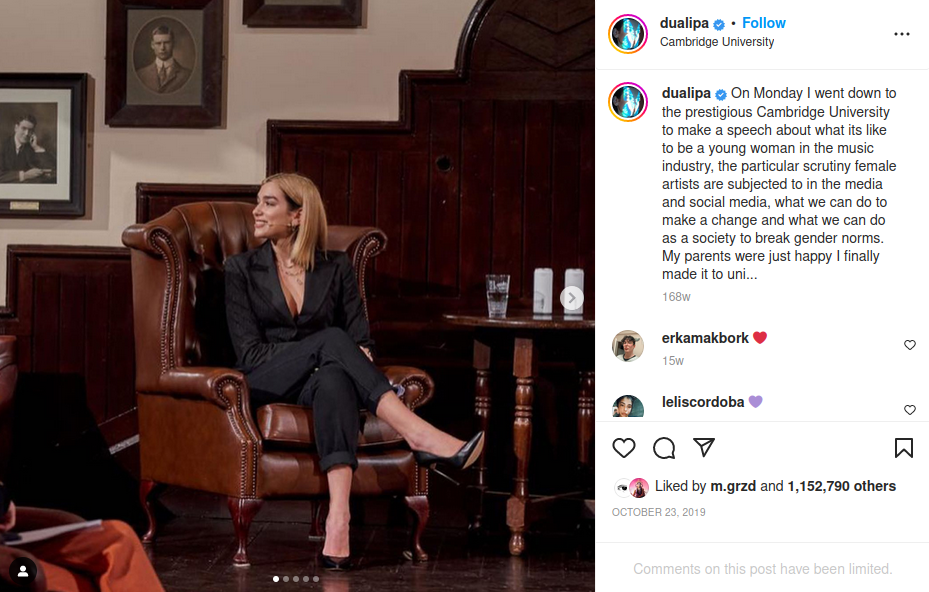 And a million TEDx talks mentions. 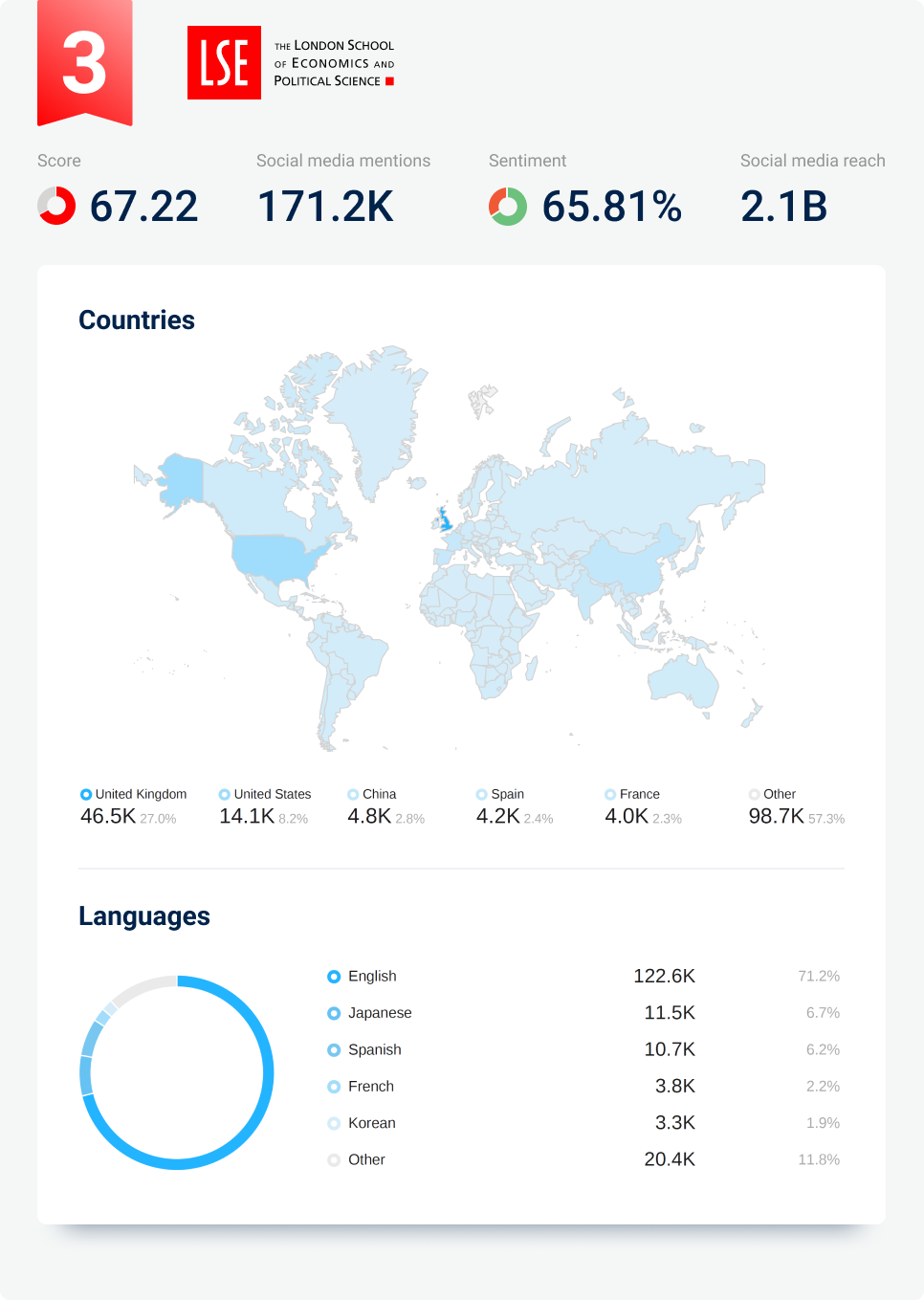 When you sort mentions of LSE by their influence, one mention by the Financial Times stands out due to its exceptional reach.

Other mentions also largely include LSE’s professors giving their opinions on Syria, voting, and other timely subjects of discussion. Richard Dawkins, for example, posted a Brexit article from the LSE blog.

This incredibly famous biologist has 2.8 million followers on Twitter, so his post must be important for the university.

Those were the top 3 universities in our ranking. To find out which other unis made it to the top 10, download the full report at the end of this article.

Which university is most mentioned in relation to its research?

We studied how many times the universities’ names appear together with keywords such as “research”, “study”, “experiment”, “scientists”, etc., and discovered two obvious winners:

Which university is most mentioned as the “fun” one?

For this category, we looked at how many times the universities are mentioned alongside keywords such as “fun”, “party”, “drinking”, “going out”, etc. Completely unpredictable, the winner by far in this category turned out to be

Which university is most mentioned as being hard?

Here, again, we looked at how many mentions of the universities go alongside the keywords such as “hard”, “cry”, “suffer”, etc. The results include three winners, if you can call them that:

Which university is the “sexy” one?

Finally, it’s time to discover which university is most talked about in relation to sex.

The only winner here is

Assessing online presence for universities is a necessary task. Their target audience spends a huge amount of time on social media. They draw their insights, beliefs, and wishes from what other people say on Twitter and Reddit.

Social listening helps universities understand the level of their popularity in different countries, as well as their reputation, strengths and weaknesses. Hopefully, this study was a good example of how this can be done.

To do a similar study, sign up for a free Awario trial and see how social listening can reveal information about your business and competitors.

To download the complete report with all findings, fill out the form below.

Best UK Universities According to Social Media
Fill out the form to get your free PDF report, complete with statistics, findings, and key takeaways.