Here at Awario we love all kinds of data. We regularly do research just for the sake of research. Or for fun. Or to show you how powerful social analytics can be, how it works, what kind of data it gathers, and how it analyzes the data.

This time we took the Royal Family as subjects of our social media analysis. They are public figures, they are talked about online, and they care a lot about their reputation. It even might be that they are using a social media monitoring tool to keep an eye on it!

Surely, members of the Royal Family aren't competitors, at least not in the way brands are, but their similarities and differences allow us to compare their popularity and the buzz that exists around them. That's what you'd do if you were a celebrity, if you have competition in your celebrity niche, if you manage celebrities or "rising stars", or if you simply care a lot about what people say about you. For example, Lena Dunham once said that her life is all about googling herself. While I'm sure she was exaggerating, this part of her life would be much simpler if she would create an alert for herself in Awario.

Anyway, without further ado, let's see where, how, and what people say about the members of the British Royal Family.

Here's a quick printscreen of alerts created for each member: 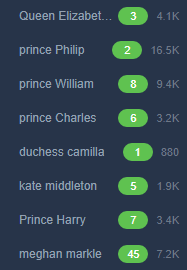 At a glance, you can see that Prince Philip has many more mentions than everyone else. This should alert you: something must've happened. Or maybe he just wore an interesting suit or something?

I went to Mentions Statistics and saw this:

Alert, alert, there was a social media crisis!

Let's look through the mentions to see what happened. 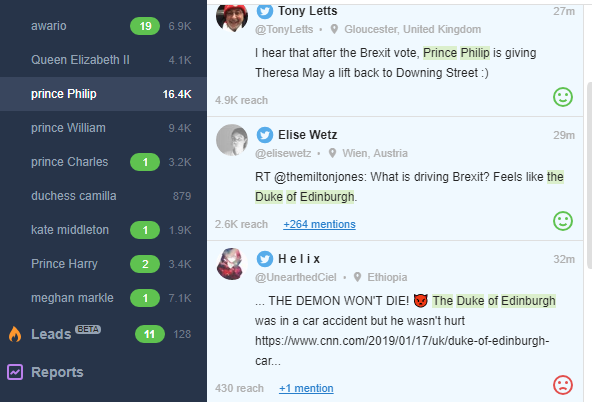 And it all becomes very clear.

Here're the most important mentions shown on the Dashboard. 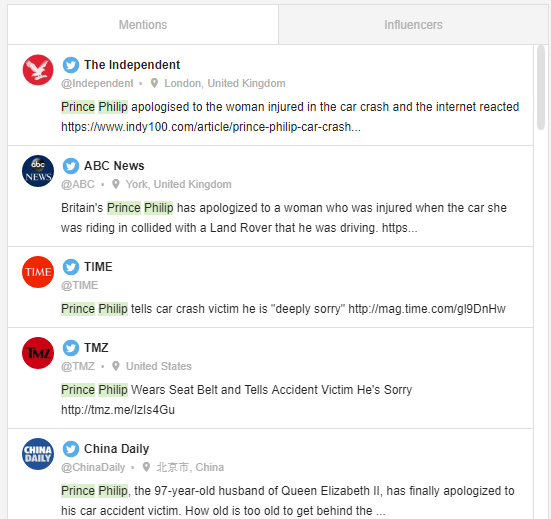 Here's a quick overview of the buzz around Prince Philip:

And the countries that talk about this: 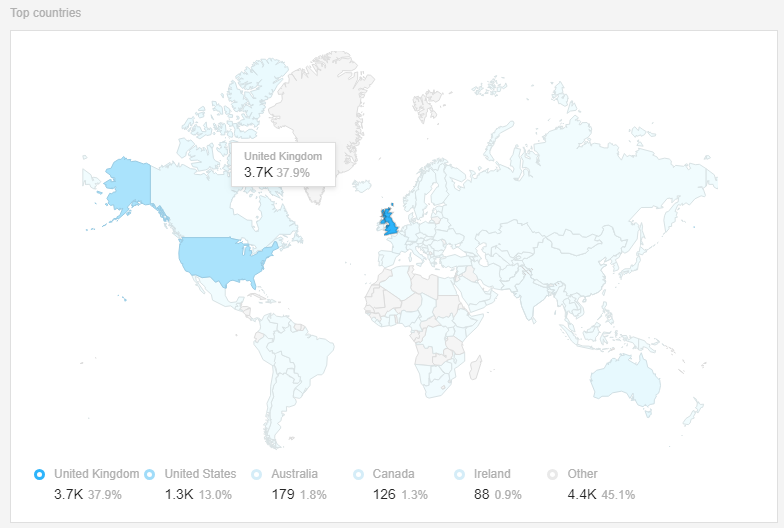 Oh, prince. At least everyone survived.

Ok, now that we've sorted what happened with all the attention that suddenly surrounds the Queen's husband, let's move on to watch what's the word about the monarch herself.

First, I looked at the Dashboard, and took a printscreen of the most important mentions as decided by the tool. 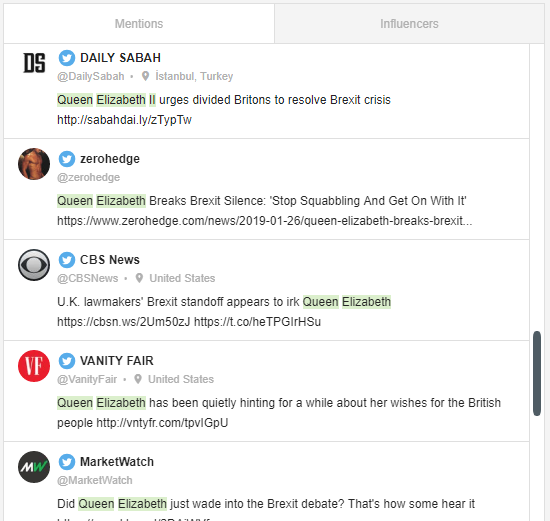 This gives us a good idea of what people say when they talk about the Queen these days. It's all about Brexit. The Queen's silence on the matter has caused loads of discussion, and now every slipped word leads to a social media hype. The public wants to know her position. This can be seen in the Topic Cloud as well:

See all those Brexit mentions?

So now to the most interesting part. What's the people's attitude to the Queen?

While it's almost as close as the Brexit vote (hehe), the negative buzz wins. The Queen isn't a popular figure, especially now that the political mess is apparent and her input in trying to find a solution is non-existent.

The three princes of the United Kingdom - Charles, William, and Harry - often receive the media's attention (although they used to receive much more before the last one got married). I decided to compare the hype around the princes, and see which one is the most popular and in what way. 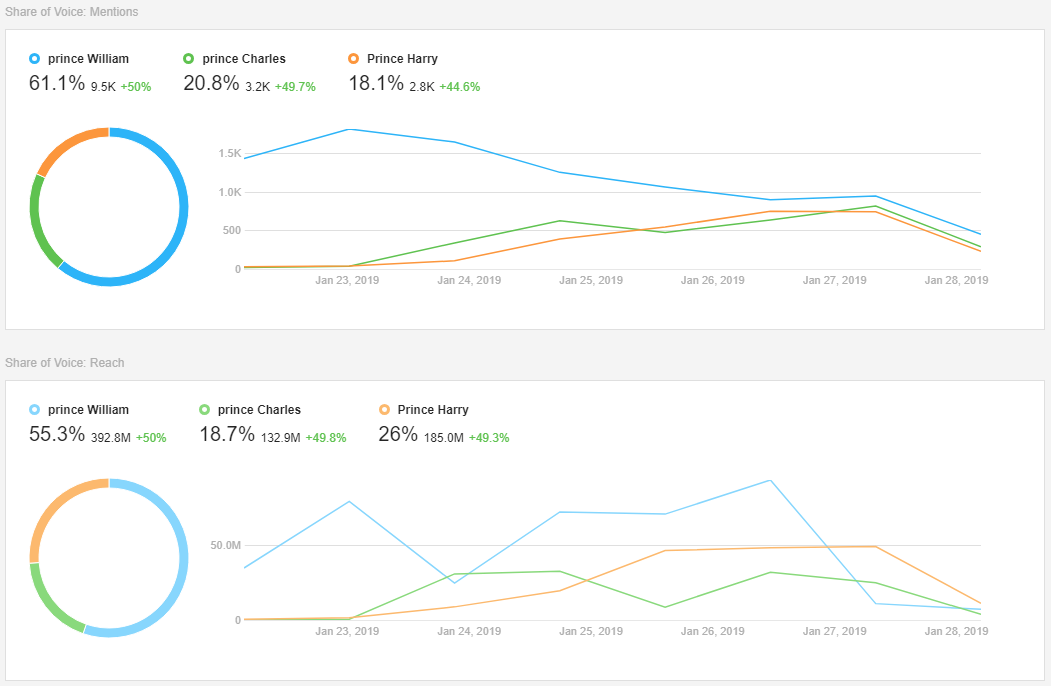 While Charles and Harry seem to be equally popular, William stands out. Interestingly enough, him and Harry are also more discussed in the United States than in the UK! 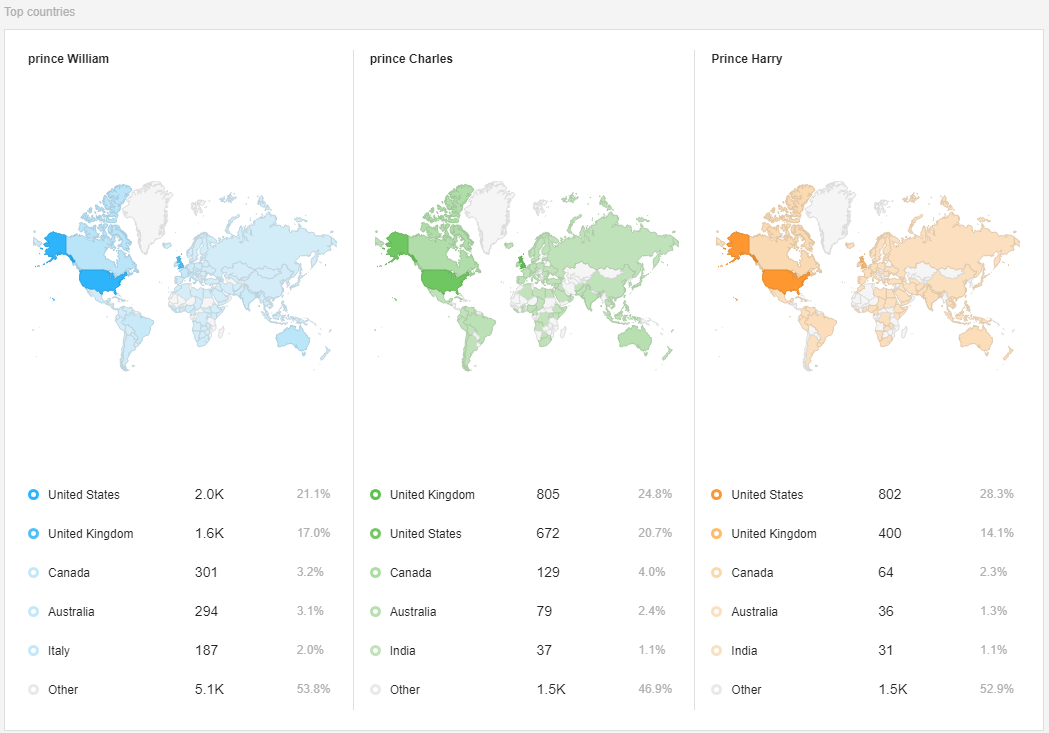 Moving on to the world's attitude towards the princes. Is it as bad as the Queen's and her husband's? Suspense is running high.

Alright, while Charles and Harry are almost equally liked by some and disliked by others, William seems to be a national hero. What's going on? Shall we compare the Topic Clouds to find out?

Prince Charles apparently tried to persuade someone to do something, and is strongly associated with debatable topics such as Tony Blair, bans, fox hunting, and Diana, and also with obviously bad words such as "cruel" and "feud". However, also with good words like "romantic".

Prince Harry is simply boring these days and is only talked about in relation to his wife, Meghan Markle.

William, though... William is talked about in relation to Sir David Attenborough, one of the greatest and most loved people in the United Kingdom. You can also see traces of some sort of a mental health awareness talk, which would also bring positive and sympathetic reactions.

A quick look at the Dashboard reveals that that's exactly the case: Prince William opened up about mental health struggles and had an interview with Sir David Attenborough (lucky guy!). 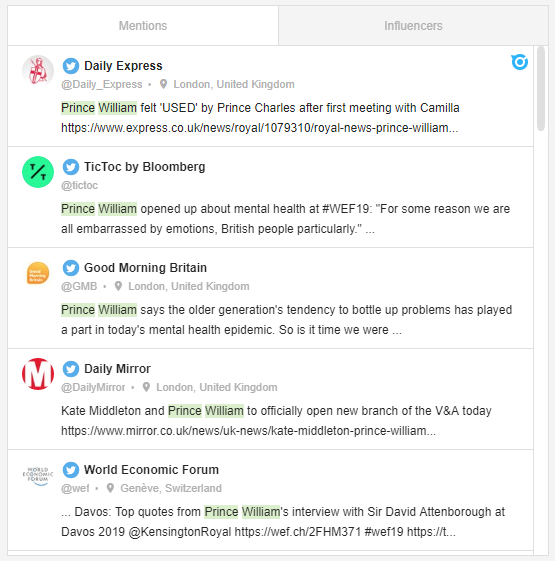 On the Mentions Feed, you can also see that he advocates (or tries to) a more environmentally-friendly lifestyle. 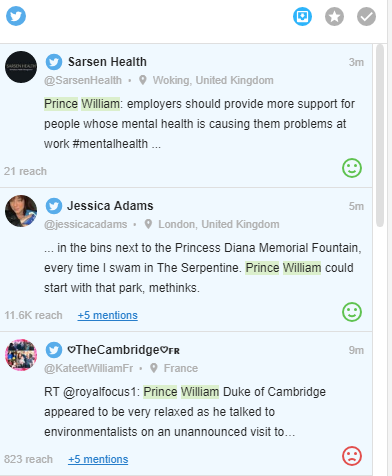 While the reaction to his input into saving the environment is mixed, the world feels positive about prince William right now.

Time to move on to the wives of the princes: Camilla, Kate, and Meghan. The media looks closely at what they say, what they wear, and what they do with the royal life that they have come to lead. Let's see what the public thinks. 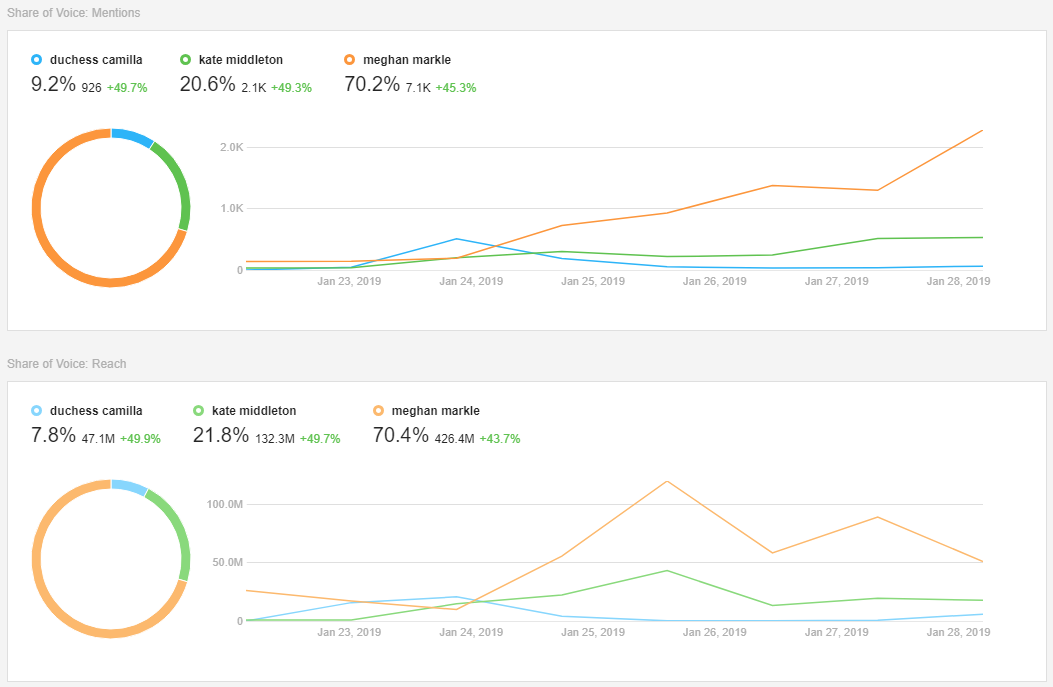 First of all, you can clearly see the share of voice that each duchess gets. The levels of popularity are apparent. 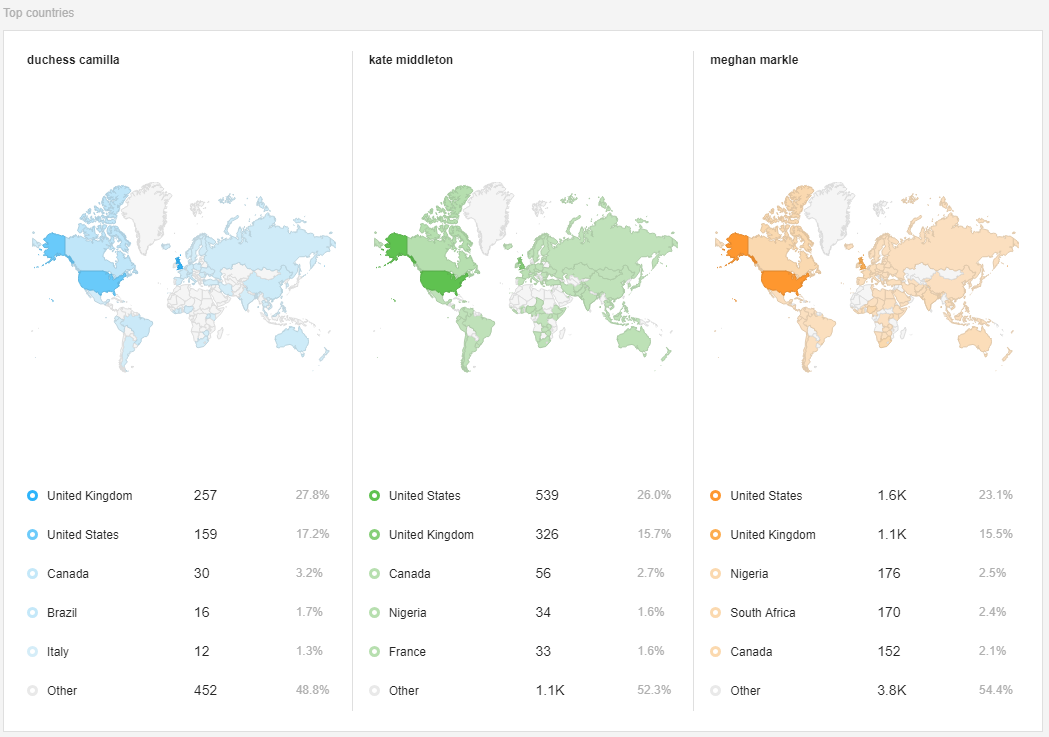 Besides, again, people talk about Kate and Meghan more often in the U.S. than in the U.K.! Seems people in the U.S. just care more about the Royal Family. And here's what they feel about the duchesses:

All is uneven here as well. The attitude to Camilla is good, Kate raises an equal amount of positive and negative feedback, and Meghan is mostly talked about positively, however, there's a lot of negativity there, too. I went to the Dashboard to look at the influential sources and see what's wrong, and found this: 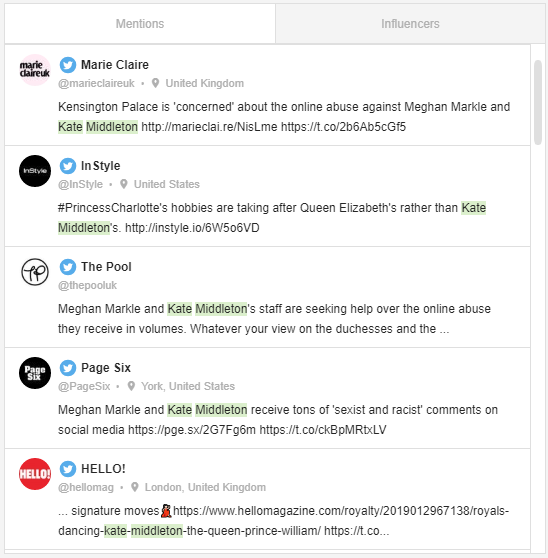 Seems that negativity is the cause of online abuse and trolling that both ladies fell victim to. 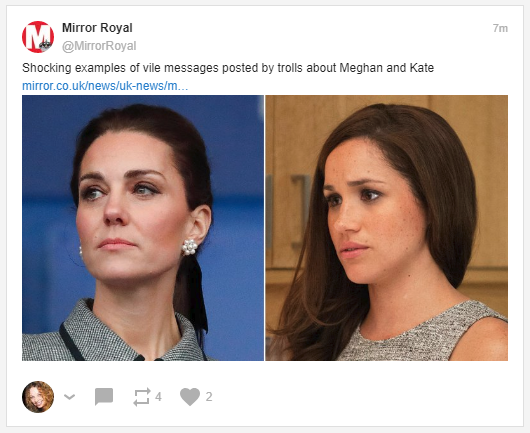 Abuse can be dangerous online as well as offline, and it's necessary to notice it in its wake and take action. This is another case where social listening might help.

At this point, I've figured we've got enough (a lot!) of interesting data. What surprised you the most? Who else would want analyzed? Let me know in the comments!