2019 has already given us the marketing campaigns that were exciting, controversial, creative, and, most of all, that achieved the goals they were set to achieve. Even if it didn’t look so right away. There are many lessons to be learned from these brands. And I’ll start with the most obvious one - Gillette.

Do you remember Gillette’s recent ad “The Best Men Can Be”? It altered Gillette’s usual slogan “The Best Men Can Get”. The ad pointed out that men are not, in fact, the best they can be. Bullying, rudeness, and harassment are too often justified with masculinity and are believed to be integral to a man’s character. The ad asked to redefine masculinity to mean caring and protecting. They asked men to call out bad behavior in other men and raise their children to behave differently.

The ad caused a serious backlash. Men posted photos of them throwing Gillette razors away, commented fiercely, started discussion threads on Reddit. The ad became the 20th most disliked video on YouTube. Men felt accused, offended, and generally outraged. What right does a profit-motivated company that sells razors have to them to change their behavior? Shouldn’t the ad be about razors?

The beauty of capitalism.  #Gillette can kiss my ##Schick.  #gilletteboycott pic.twitter.com/juu1TJzgIY

From the surface, this was a disaster. Gillette offended most of their primary consumers - men. And for what? To appeal to the millennial’s vague belief that corporations should care more about society? To be in trend?

I believe, Gillette did this to appeal to women.

Let’s be honest, the backlash from men was predictable. No one likes to be told they are not good enough. But guess who liked the ad that called out bad male behavior? Women!

THIS is how you use your brand. THIS is how you engage with your audience. Gillette being aware of mostly having a male audience and using their influence as a global brand to make a change for the better. other companies take notes pic.twitter.com/KCdxKDLji0

The absolute most of them loved the ad! Now guess who talks about shaving on social media more, who buys more expensive razors, who shaves more and more each year? Women.

Gillette lost 20% of the market share over the past decade due to the low-priced competitors such as Dollar Shave Club and Harry's joining the market that both target men. Gillette is on the verge of losing master brand status. They had to do something differently. And they re-focused their target audience.

When this happens, it might be useful to research the market again and see if there is another audience that might benefit from your product. And if there is, it might be that refocusing your marketing strategy to appeal to this new audience will alienate some of your existing audience. Here, it’s important to calculate the risks and benefits, and go for it if the omelet is likely to be worth the broken eggs.

Now, this case is probably only familiar to the Russian-speaking part of the world and complete marketing geeks. But I am sure it’s worth mentioning because the campaign of Reebok in Russia was as effective and as misunderstood as Gillette’s one.

In February, one of the most discussed things in the Russian-speaking part of the online world was Reebok Russia's campaign. It was even discussed in media outside of Russia. It was part of Reebok’s #BeMoreHuman campaign that promoted female empowerment.

In Russia, the social media campaign used a hashtag that roughly translated as #OutOfControl and featured local female role models, such as a mixed martial artist and a champion jiu-jitsu fighter. It also featured an online feminist influencer, Zalina Marshenkulova, a photo of whom came with the caption, roughly translated to English, “Stop sitting on the needle of male approval, start sitting on men’s faces.”

reebok russia has reworded the english ad slogan 'never apologise for being strong' as 'stop sitting on the needle of male approval, start sitting on men's faces' pic.twitter.com/mr0qgi3HjG

The slogan caused tons of criticism with some people threatening to boycott the company.

Men and women alike felt offended. Men perceived the ad as sexist towards men while women argued that the ad still tells them what to do - just in a different way. Most people agreed its sexual message went too far.

But much more importantly, the slogan became a meme in hours. It was made fun of in dozens of ways: parodies, sketches, and an extreme amount of funny tweets circled the Russian-speaking part of the Internet for weeks.

Due to the backlash, the company took down the most scandalous parts of the #OutOfControl campaign (the irony here is killing me). They also fired the brand’s marketer director and the creator of the campaign (or, he resigned due to the backlash - this remains unclear).

However, the campaign, in the end, did exactly what the marketers behind it wanted it to do: it got younger people talking about Reebok.

In 2019, Reebok became a part of pop culture by association. Before the campaign, you wouldn’t find a mention of Reebok on Russian social media. Nike and Adidas have always been popular, each in their own cultural niche, while Reebok was never even thought of. Until the campaign.

Creating a controversial buzz around the brand is a desperate measure. So is using sex ads in products that have very little to do with sex.

However, if your brand is becoming forgotten, copying your competitors' tactics will get you nowhere. You need to go viral. And a combination of humor and a sexual message does this best.

Think about stereotypes associated with millennials and gen Z. They (we) are believed to be egoistic, addicted to phones and gaming, easily offended, trapped in “boring” jobs while believing to be special. Doesn’t sound like a bunch of people that would willingly join the army, does it?

But the British Army faced the challenge. In their brilliant, highly effective campaign, they decided to let the millennials see their image from a different angle. 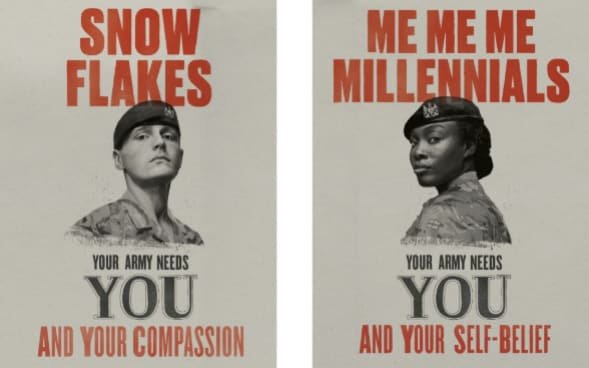 Image taken from The Telegraph

Posters take us back to the famous Lord Kitchener “your country needs you” First World War recruitment campaign.

TV adverts targeted people stuck at jobs they don't enjoy and showed how qualities, stereotypes, and habits that are usually considered a weakness are seen as a strength by the Army.

Again, the campaign wasn’t met well by everyone. Many found it insulting, some pointed out that the idea behind it is simply wrong: taking selfies doesn’t make you confident (or signal that you are) as the psychological research shows, staring at your phone doesn’t mean you focus well - the opposite is true, and so on.

As annoying as it sounds, thinking outside of the box is exactly what you need here.

Sometimes, you have to offend some people to make an ad, sometimes you have to embrace the stereotypes and perform a mental shift in how you see a generation. And sometimes, you take a vegan sausage roll and make it an Internet sensation.

This is the story of Greggs.

Greggs is a British bakery chain that is famous for being cheap and extremely down-to-earth. It’s a place for everyone. It’s the opposite of every posh bakery out there.

Recently, they released a vegan sausage roll, which wouldn’t be a big thing if they didn’t also post a video on social media about it. A video was a parody of what Apple usually makes when they release an iPhone. It was titled “The wait is over” and the “characteristics” of the new vegan sausage roll were shown off. The video became popular straight away, but what really made it viral was a tweet from Piers Morgan, a former tabloid editor and U.K. breakfast TV host with 6.5 million Twitter followers.

Nobody was waiting for a vegan bloody sausage, you PC-ravaged clowns. https://t.co/QEiqG9qx2G

And the company responded:

The start of 2019 for Greggs was a total success: they jumped 9.6% in the first seven weeks.

If you don’t have a serious brand image, don’t take your brand too seriously either. Have fun with your marketing tactics, especially on social media. Also, respond to negative comments with humor, and your brand will come out as a winner.

2019 isn't even close to being over. I am looking forward to more marketing campaigns that are not only effective but also courageous and exciting. Hopefully, you do too. Because, in the end, these are the campaigns that are worth discussing and learning from.