KFC vs. Popeyes: Which brand wins on social media?

If you google fried chicken recipe, you'll get some 445M search results. And yet, for many of the world's fried-chicken eaters, it's the ready-made, fast-food version that hits the spot. Out of the fast-food staples available today, fried chicken is one of the most irresistible, even to demi-goddesses like Beyoncé.

Whenever celebrities fail to bend the only-human rest of us, there's movies and TV shows. Breaking Bad, the TV show notoriously famous for, among other things, its delicious integration of fried chicken, is considered one of the driving forces of reviving the fast-food fried-chicken appeal. Apparently, when you portray a fictional chicken restaurant chain as a cover for a meth empire, people go crazier over the chicken than the drug. 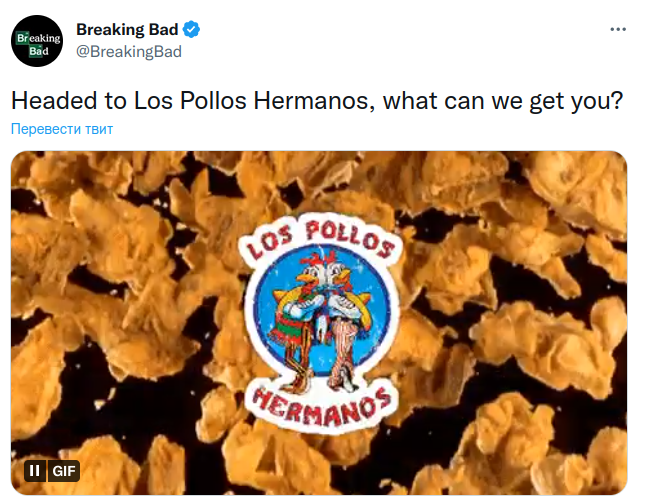 Even if it weren't for celebrity and TV endorsement, fried-chicken restaurants would still establish themselves as trusted providers of quick-serve comfort food. Throughout the years, the two restaurant chains that proved this better than others and converted the most people into loyal consumers of fried chicken are KFC and Popeyes. In this post, we wanted to take this brand rivalry for a social listening spin.

The two biggest names in the fried-chicken fast-food scene, KFC and Popeyes, have been compared by consumers and industry professionals the world over. With social listening, we're able to analyze the entirety of online conversations around the brands to draw insights reflective of the global market as a whole and local markets in particular.

To analyze everything that's being said about KFC and Popeyes online, we set our social media monitoring and analytics tool Awario to collect mentions of fast-food chains found on Twitter, Facebook, Instagram, YouTube, and Reddit. 10 weeks later, we took the real-time and historical data that Awario collected, then filtered, searched it, and examined the social listening stats that the tool derived from the mentions.

Whenever we run market research or brand battle, the first social listening stats we look at are the number and reach of brand mentions. Because Awario picks up both tagged and untagged mentions, the number of conversations around a brand is a legitimate assessment of its share of voice — the total online visibility compared to other brands'. Share of voice is closely tied to market share as it reflects brand awareness and online customer engagement. 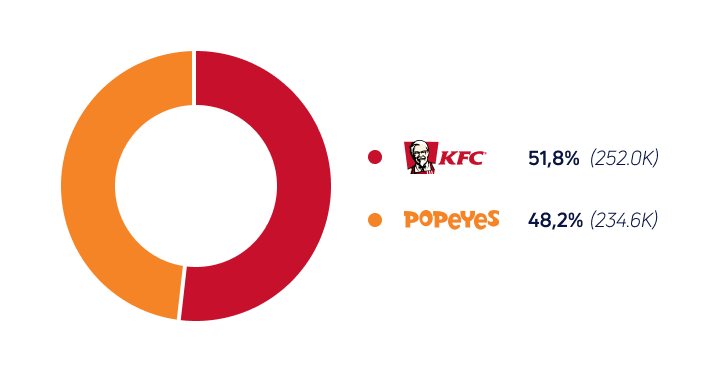 Shares of voice of KFC and Popeyes

In terms of the volume of brand mentions, KFC and Popeyes are not at all far apart. The brands divided their shared global market very evenly, with KFC leading by some 3%. This means that worldwide, KFC and Popeyes generate more or less equal amounts of online buzz and brand awareness. Interestingly, in the U.S., which is home ground for both brands, Popeyes is the one leading in terms of the total number of mentions, while KFC gets a lot of buzz from overseas. 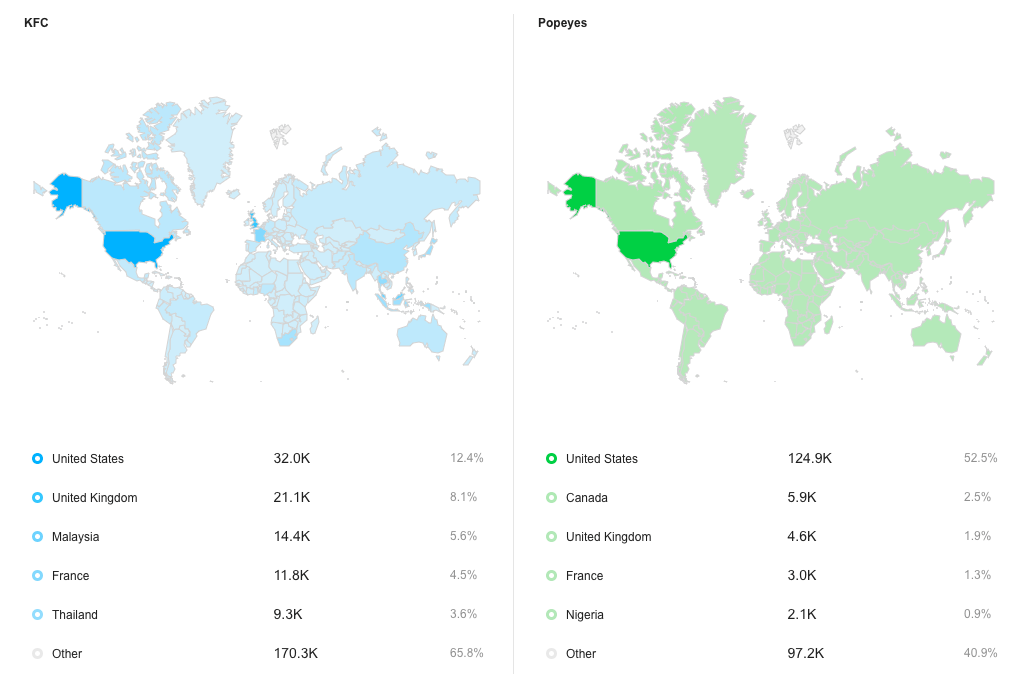 Mentions of KFC and Popeyes by country

To understand brand awareness even better, we look at the reach of mentions. Reach is the total impressions generated by brand mentions, i.e. the number of times social media users have been exposed to mentions of KFC and Popeyes over the past 10 weeks. 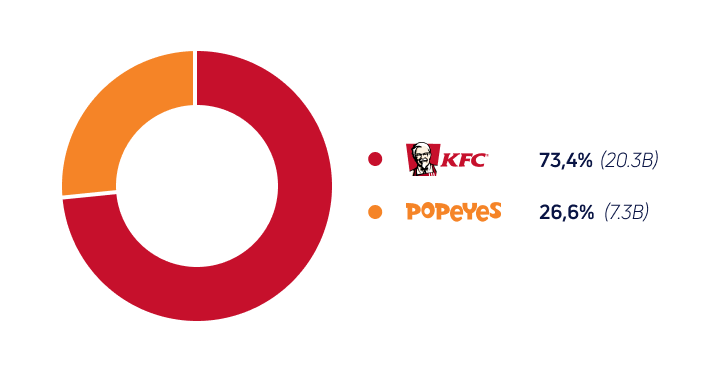 Total reach of mentions of KFC and Popeyes

As you can see, KFC got three times as many impressions as Popeyes; in terms of the total reach of social media conversations, KFC is much more visible than Popeyes. The reach metric helps us understand the quality of mentions: if the same number of mentions results in such different exposure, there have to be some powerful mentioners behind the conversations. More often than not, these will be social media influencers, celebrities, and mass media outlets.

Awario's account type analytics support the point: KFC leads in terms of the number of business accounts among mentioners, and those tend to have bigger followings and total reach.

The next step we take when comparing brand mentions is the sentiment behind them — that is, the tone of mentions that can be positive, negative, or neutral. The KPI we can derive from this is Net Promoter Score (NPS), i.e. explicitly positive mentions that in the age of social media can be safely considered as recommendations customers share with their followers and friends online.

Net sentiment of mentions of KFC and Popeyes

Both KFC and Popeyes have a positive Net Sentiment, which means both brands get mostly positive feedback on social media. For Popeyes, the prevalence of positive mentions is slightly bigger (21% vs 18%), but the brands are not too far apart in the sentiment game.

Next up on our brand battle checklist is audience analytics — social listening stats that help us compare brand mentioners and the types of online conversations they start. The first metric on our list is gender.

Gender of mentioners of KFC and Popeyes

As you can see, both brands' online audience is mostly male. For KFC, the share of male mentioners is 61.3%; for Popeyes, the share is even bigger — 72.4%. We're now interested to see where the audiences come from. For this, we'll look at the mentions' languages.

Languages of mentions of KFC and Popeyes

KFC, being a much more global brand (it's represented in some 146 countries), also has the most prominent variation of brand mentions' languages. Only half of all mentions are in English; next up are mentions in Thai, Indonesian, and French. Popeyes, present in some 30 countries outside of the U.S., gets most of its mentions in English.

Finally, to see key conversations, trends, and most popular social media posts featuring KFC and Popeyes, we'll take a look at the Topic cloud. This section of Awario's dashboard hosts the keywords and phrases that appear in brand mentions the most. 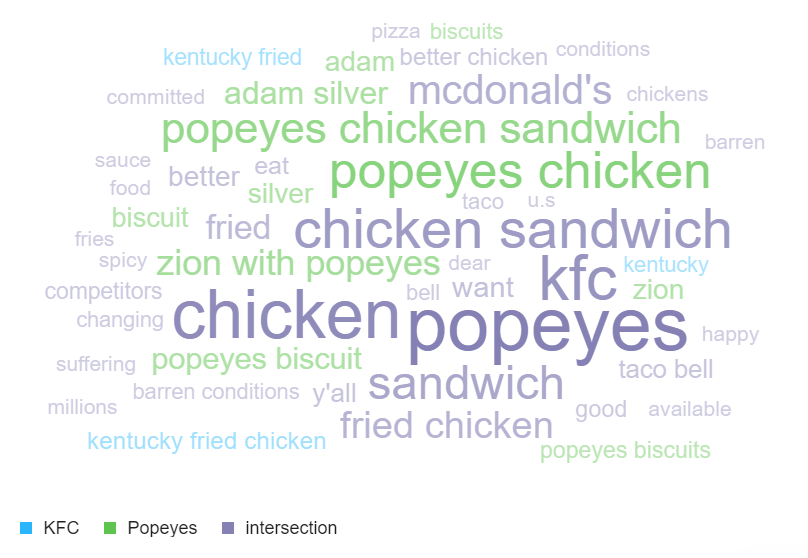 Topic clouds for mentions of KFC and Popeyes

Although the KFC and Popeyes rivalry has featured a lot of celebrity faces over the years, the age of health foods, social media, ASMR, and mukbangs saw a shift in the way fast food is represented online. The human influencer feed for both KFC and Popeyes is mostly mukbangers, occasionally interrupted by professional gamers, professional players, and possibly the most professional and entertaining Twitter user of all time Chrissy Teigen. 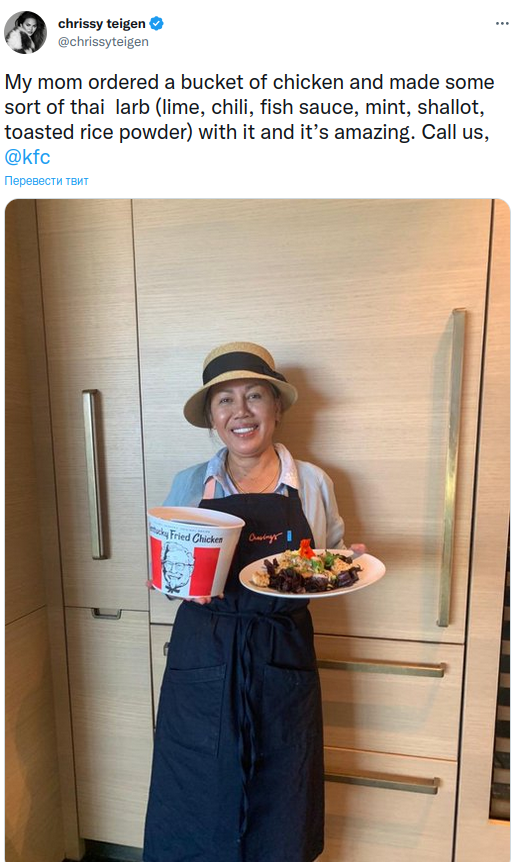 A peculiar fact about mass media influencers talking about fast-food chains on social media is that the coverage quick-serve restaurants receive is becoming more and more plant-oriented. In the face of the world population gradually leaning towards plant-based, chicken restaurants are not giving up. During the 10 weeks of our study, the mentions that brought KFC the most social media visibility were centered around the vegan options on its menu.

Meanwhile, Popeyes, that still lacks plant-based substitutes for the chicken it serves, got the most visibility from launching its first restaurant in China and becoming America's #1 quarantine fast-food provider. Apparently, in times of the COVID-19 lockdown, Popeyes saw its sales skyrocket as it became the nation's top fast-food choice during the pandemic.

Deep dive into the mentions

Now that we've reviewed key social listening metrics and stats, let's dive into the mentions and search them for user feedback on different aspects of the food and service the restaurants provide. One thing that stands out right away is customers' relentless and concise advocacy. Namely, via the usage of the > symbol to define their fried-chicken affinity once and for all.

We went ahead and counted such bold judgments expressed on both sides of the KFC and Popeyes rivalry. Over the 10 weeks of our social media analysis, there were 241 posts stating Popeyes' supremacy over KFC, and only 153 pro-KFC posts stating the opposite.

Even though we're entering very dangerous territory here, comparing KFC and Popeyes would be impossible without gathering user feedback on the actual taste of fried chicken prepared by two different recipes.

Judging by the sheer volume of social media posts praising the mysterious yet supreme taste of Popeyes' chicken, we have to acknowledge its hands-down victory in terms of taste. Before KFC fans come and find me to execute their revenge, we're moving to the next point of comparison — service.

Being quick-serve restaurants, neither KFC nor Popeyes are expected to provide impeccable service. However — and this is especially relevant in times of social distancing and delivery as the main means of getting that fast-food fix — both KFC and Popeyes seem to have lost their grip on the service quality standard. 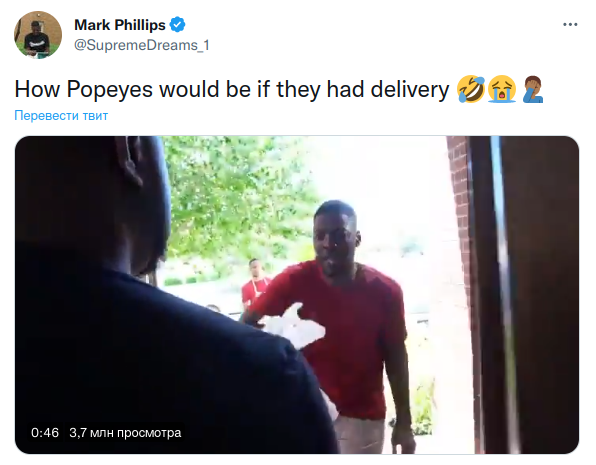 Evidently, determining the winner in terms of the fast-food service is a tough call as both KFC and Popeyes receive more complaints than praises of their respective deliveries and in-house service.

Comparing two major fast-food chicken providers' vegan menus is not exactly a self-explanatory move. However, in the course of this analysis, it became clear that KFC's and Popeyes' plant-based options are talked about a lot, with the former getting all the vegan points following its partnership with Beyond Meat. KFC became the first major fast-food chain to introduce a plant-based chicken product and by doing so won a lot of vegan hearts now demanding a сontinual supply.

Popeyes, in the meantime, has been busy expanding to China and feeding the quarantined population at home. Although the chain is nowhere near adding plant-based chicken substitutes to the menu, this doesn't stop customers wishing for it.

Another thing Popeyes customers are wishing for is the chain's expansion to more countries overseas. As is the case with most things in this decade, a lot of customer requests are channeled via social media.

With many requests coming in from potential customers overseas, China might not remain the newest land on Popeyes' map for too long. Let's just hope that by the time the restaurants are represented in sufficient quantity worldwide, the chain will also have implemented and mastered some vegan options to make sure all customer segments are covered to the max.

KFC, meanwhile, covers most of the fast-food-friendly world. More often than not these days, it's not customers' first choice but it works as a back-up whenever Popeyes is not available or fails to deliver a widely-loved product or service. 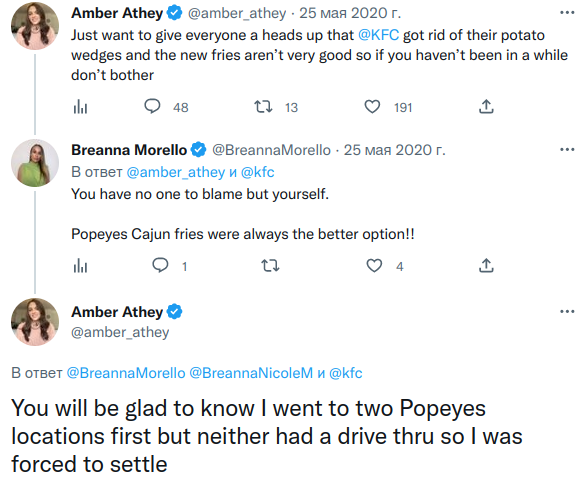 And the winner is...

We have monitored everything that's been said about KFC and Popeyes on social media over the past 10 weeks. Here's what Awario's social listening analytics and audience insights helped us understand:

This leaves us with somewhat of an answer: although KFC holds a larger global territory, it seems to have lost to Popeyes on home ground. Now, as KFC is going plant-based and Popeyes is going east, we might be in for many more new spins to the brands' rivalry in foreign lands and markets.