Reputation management for banks: how not to fail

In this article, we walk you through the reputation analysis process for banks and give you reputation management tips using Wells Fargo as an example.

What’s the most high-stakes decision you have to make in your life? In our day-to-day routine, we usually don’t come across life-or-death situations, so it’s probably nothing you see in movies. However, at this scale, choosing a bank is probably one of the most important choices you have to make.

It’s obvious that a bank’s reputation is important. Anything that has to do with our finances needs to have an air of utmost reliability and security. People won’t be willing to trust you with their money if there are any rumours about you around. Thus, banks need to watch their brand reputation like hawks — and in this case, only online reputation monitoring tools like Awario can emulate the bird-like sharp eyes.

Of course, there’s always a risk of a misunderstanding or an unhappy customer, but social listening tools ensure that you are instantly notified of these risks and know how to handle them.

What is reputation management?

To put it simply, it’s all the actions you take to change how people think about your company and how they express it online. Online reputation management includes:

To keep track of negative mentions is a must, but it’s not the only thing to do. You also need to be proactive and build a positive image around your brand by showing respect and value to your customers and highlighting your advantages. Social listening can help with that as well.

A social listening tool like Awario can help you analyze what in particular your customers like about your brand so you can highlight it in your marketing message.

So what happens when there’s a lack of reputation monitoring? Let’s examine a reputation crisis of a bank and see how it could be handled with Awario.

Wells Fargo: how social listening could have prevented a PR scandal and $185 million of fines

One of the biggest US banks, Wells Fargo, had several of those, but this one could be easily prevented by putting effort into reputation management.

Here’s a short recap: Wells Fargo’s sales department set up an extremely high-demanding culture that required their employees to make more than 20 deals a day — something which later was deemed unrealistic. Some employees described intense pressure and stress as a part of everyday work in sales. As a result, this culture and cross-selling tactics led to creating fake accounts for Wells Fargo clients in order to fill the quota.

Under pressure from their supervisors, employees would often open accounts without customer consent. In an article from the American Bankruptcy Institute Journal, Wells Fargo employees reportedly "opened as many as 1.5 million checking and savings accounts, and more than 500,000 credit cards, without customers' authorization."

A screenshot from the Wall Street Journal

The issue was reported several times in the media, both in popular newspapers such as The Wall Street Journal and industry media. Many customer reviews also mentioned aggressive sales tactics. However, the company didn’t take any actions to change its policies which resulted in the government investigation five years later.

While the initial reports in the media gathered some public attention, the investigation and the consecutive fines Wells Fargo had to pay brought a full-blown PR crisis on the bank. Wells Fargo is still dealing with the results of this scandal trying to win customers’ trust back by rebranding.

If the bank had a social listening framework to properly evaluate the impact of media buzz on the early stages of the scandal, perhaps they could have addressed it sooner and taken a proactive position. They could have communicated with journalists to deliver their apology and change the work culture and avoid the investigation.

So, what can we learn from this story? It’s important to monitor your mentions online and understand what weight they carry. But we need more details.

How do you establish a proper online reputation analysis? We have a guide to help you!

How to analyze a bank’s online reputation

Let’s take Wells Fargo as an example, since we started talking about it already, and check if it managed to recover after this crisis.

First, you’ll need a reputation monitoring tool. You can effectively use a social listening tool for this granted that it provides sentiment analysis and reporting features.

Awario works great for reputation monitoring since it covers a plethora of online sources and offers sophisticated analytics. You can quickly sign up for a free trial to run a reputation analysis along with me.

First, you need to create a monitoring alert with your bank’s name, social media handles, and other abbreviations or phrases that can be used to refer to your bank. 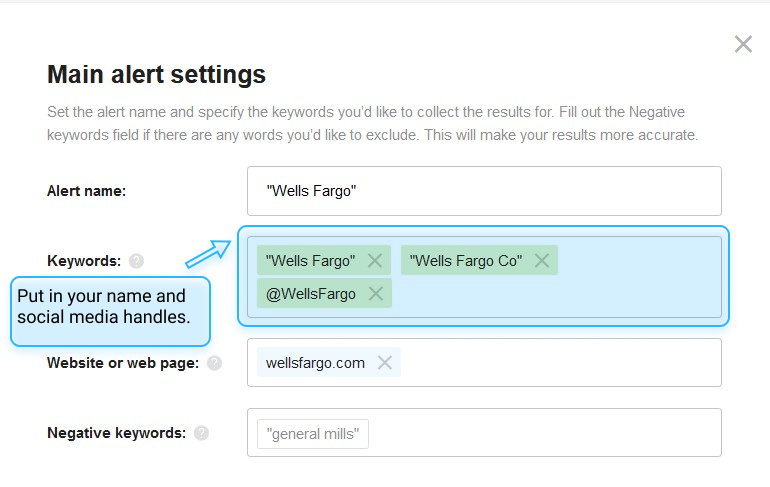 You can also select advanced settings such as the country, state, city, language, online sources (Twitter, Facebook, online websites), or the time frame to get online mentions from specific places or periods. 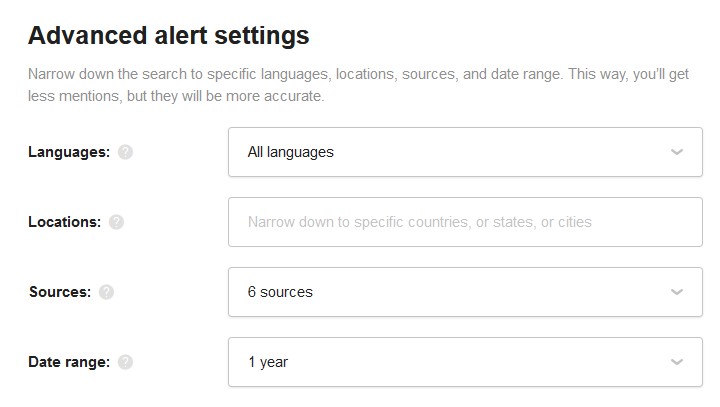 Advanced settings to focus on specific location or channel

Here's a short video on how to set up a monitoring alert to help you.

Once you set up your monitoring alert, you’ll immediately start collecting online mentions. Some sources may take a bit longer than others, but in a few minutes you’ll already have a decent amount of data to analyze. Now it’s time to check out the Dashboard.

Step 2: Look at the analytics

Since we are analyzing the reputation of the bank, the most important metric for us is sentiment. Looking at the graph we can immediately see a spike in negative mentions on the 8th of July.

Awario’s Insights feature shows you what caused sudden spikes in mentions and by clicking on the red pin we can see that three tweets from this date got a lot of attention.

Tweets that caused the spike in negative mentions.

They are all referring to Wells Fargo's decision to shut down all of its existing personal lines of credit.

This means that the US consumer is dead

If we check the column with the most influential mentions from this period, we can see that some of them are also mentioning this news.

Once you check with the sentiment and most popular mentions, look at the Topic cloud on the right side of the Dashboard. It shows you the most popular words and phrases used in conversations around your bank, and quite expectedly there are plenty of phrases related to the recent news. You can put your mouse on a word to see how many times it was used and If you’re not sure why a certain word or phrase is used so often, you can simply click on it to find all the mentions that contain this word. 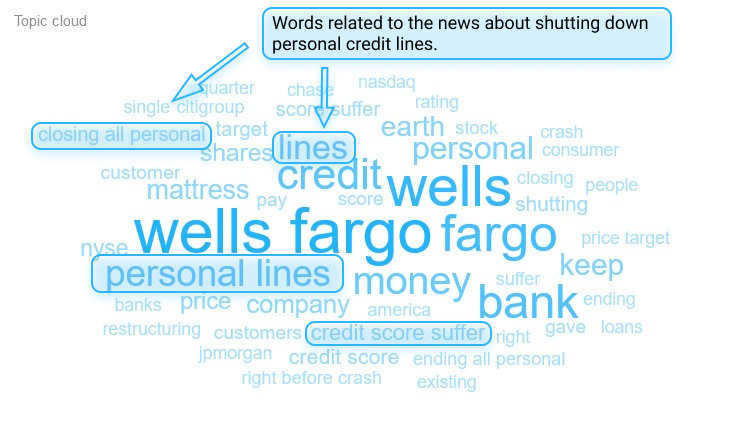 What’s interesting is that while the news about cutting personal credit lines caused a more than 1000% growth in negative mentions, we can see that it didn’t affect Wells Fargo’s reputation long-term. There’s no steady rise in negative mentions in the sentiment graph — for the rest of July, the bank had a usual amount of negative conversations around it.

By tracking your reputation over time, you can see which events have the potential to ruin it long-term, and which will be blown over in a few days.

The best course of action from Wells Fargo would be to release a statement aimed at their customers right on the 8th of July, apologizing and explaining their decision and then referring everyone to this statement after. Since the news was only relevant for a few days, any further efforts from the bank could have instigated the story even further.

Step 3: Benchmarking against your competitors

It’s not enough to track your bank’s reputation. You need to understand the market and your position on it. That’s why it’s crucial to compare your reputation with your competitors.

Awario makes it easy with the Alert Comparison report. You can choose up to fifteen alerts to compare against each other.

You’ll need to create monitoring alerts for your competitors: 3-4 banks that target the same audience as yours. Then go to the Alert Comparison report and select the alerts.

Here you can see your share of voice, your target audiences juxtaposed against your competitors, and more, but we, of course, are interested in the sentiment.

As you can see, out of the five biggest banks, Wells Fargo has the worst sentiment ratio with the highest negative sentiment and one of the lowest positive sentiment.

However, it also boasts the second largest share of voice. I guess it’s true what they say, there’s no such thing as bad publicity. Although it’s probably not the case here.

As I mentioned before, Wells Fargo has tried to rebrand itself, but it seems like it just can’t escape tarnishing its reputation. What could they do to make up for it?

Once I analyzed Wells Fargo’s reputation, I’ve noticed the areas where its reputation management could be improved. While these tips are based on the reputation analysis I conducted, they could be helpful for any business.

Track your online reputation and follow these tips — and your brand will certainly get the highest positive sentiment score! 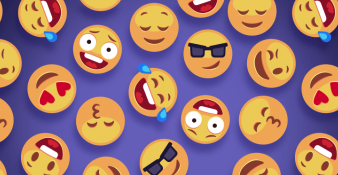 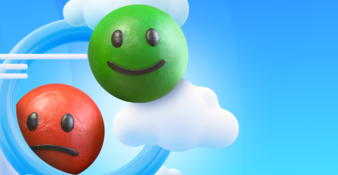