McDonald's vs. Burger King: The Great American Brand Off

I'm no historian or PoliSci major but I research wars quite a lot. The Cola Wars, Fried-chicken Wars, Coffee-and-wifi Wars among others might not be the highlights of America's war history but please don't be fooled — when it comes to expanding market shares and winning customers, brand wars get real action.

On today's menu is possibly the greatest American brand battle of all time. It features nothing less than a brand from the world's top-10 and goes by the name of the Burger Wars.

McDonald's vs. Burger King is one of the legendary brand wars that last for generations. Ever since Richard and Maurice McDonald paved the way for fast-food companies to conquer the hearts of American consumers, many brands have followed along, but none has been a closer rival to McDonald's than Burger King. For decades, the two fast-food chain superstars have drawn out menu items, mascots, and clever marketing gimmicks — with the sole aim of becoming America's favorite.

Now that the rivalry has transcended the U.S. borders, McDonald's vs. Burger King is a brand World War and a perfect addition to our Brand Battle series. As usual, we at Awario decided to look at the companies through the lens of social listening and see which brand wins on the social media front.

Let's get to the meat of the matter.

Need some background? Get our free guide to social listening.
Fill out the form to get your free PDF report, complete with statistics, findings, and key takeaways.

Pro tip: When setting up brand monitoring, it's important to indicate all variations of the brand name and use the symbol and case sensitive format whenever the brand name features any special characters. That's why we put McDonald's in quotes and used the ++ symbols.

We also went ahead and blacklisted McDonald's many corporate accounts as well as any private accounts that feature McDonald's in their social media handles. 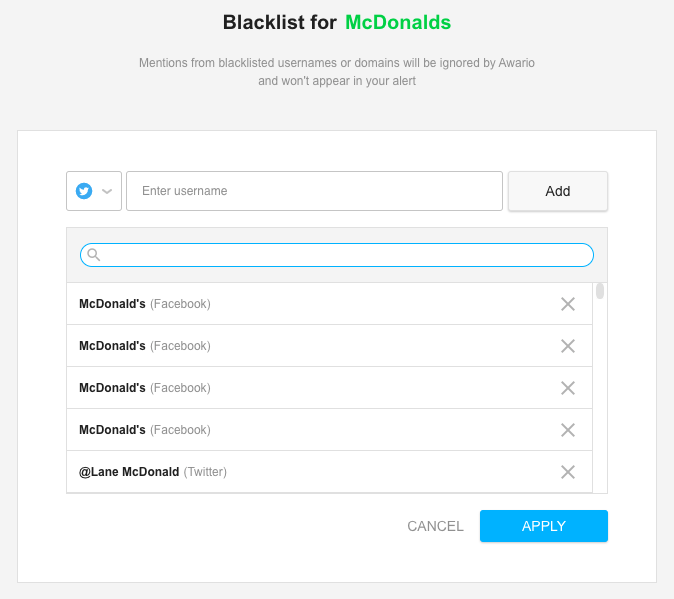 Having done the same for Burger King, we fired up 24/7 brand monitoring of the rivals. Then, we left Awario to do its job in peace and came back to the alerts over 5 months later. Here's what we looked at to determine which brand wins the social media game.

In addition to that, we were interested in audience analytics such as user locations, languages, gender breakdown, as well as the biggest topics and trends that come up in McDonald's and Burger King-related conversations on social media.

Finally, we examined unique authors who've mentioned the brands over the past 5 months to create world and U.S. maps of McDonald's and Burger King's conquers. Depending on which brand has more unique social media users talking about it in each location, we were able to determine which fast-food giant won the most territories.

First off, we looked at the sheer volume of social media discussions around McDonald's and Burger King to determine which brand holds the bigger share of voice. Share of voice is a social listening metric tied closely to market share as it reflects how much of the social media space is buzzing about each brand.

As you can see, the fast-food space on social media is divided rather evenly between McDonald's and Burger King, with the former outweighing the latter by some 100K brand mentions, which in social listening terms is only about 2%.

To help us take a closer look at what caused spikes and drops in the number of mentions, Awario offers the insights option — by clicking on the high/low points of the graph, we can see what kind of social media activity was behind any fluctuations in brand mentions.

From here, we can go to individual social media posts and examine the reasons for all spikes and drops in the number of branded conversations. For example, the 367% growth in mentions of McDonald's on August 17 - 23rd was caused mainly by a witty product-related observation that went viral.

Reach is a social listening metric that allows us to see what kind of visibility brands receive on social media. Depending on the exposure brand mentions get (this is determined by each account's following and engagement with each post), they generate impressions. In simple terms, reach reflects the number of times social media users have been exposed to brand names over a period of time.

In terms of online visibility, McDonald's wins by a bigger margin. During the 5+ months of our analysis, social media users have been exposed to the brand name more than 18 billion times — that's about 5 times for every social media user on the planet. On average, Burger King emerged in each user's feed 3.8 times over the past 5+ months.

The fact that McDonald's and Burger King hold more or less the same share of voice but with a different reach of brand mentions means that mentioners of McDonald's are more influential in social media terms. They have larger followings and therefore generated more user activity, exposing brand mentions to more people.

Sentiment analysis is what gives social listening an edge over social media monitoring. In addition to collecting brand mentions, social listening tools like Awario can determine the prevailing tone of conversations, as it can tell positive, negative, and neutral mentions apart. Let's see what sentiment prevails in mentions of McDonald's and Burger King.

According to Awario, the prevailing sentiment of brand mentions for both McDonald's and Burger King is actually neutral. But even if we toss those aside and focus on explicitly positive and negative mentions, the rivals go toe to toe, with Burger King winning by the tiniest margin possible.

In a brand battle this big and iconic, influencers come in all shapes and sizes. Being a solid influencer marketing tool, Awario identifies micro-, macro-, and mega-influencers by analyzing brand mentions and the accounts behind them. For a quick overview of the biggest influencer accounts that have talked about McDonald's and Burger King in the past 5 months, we can go over to the Alert Comparison report that lets us benchmark social listening metrics from different monitoring alerts. 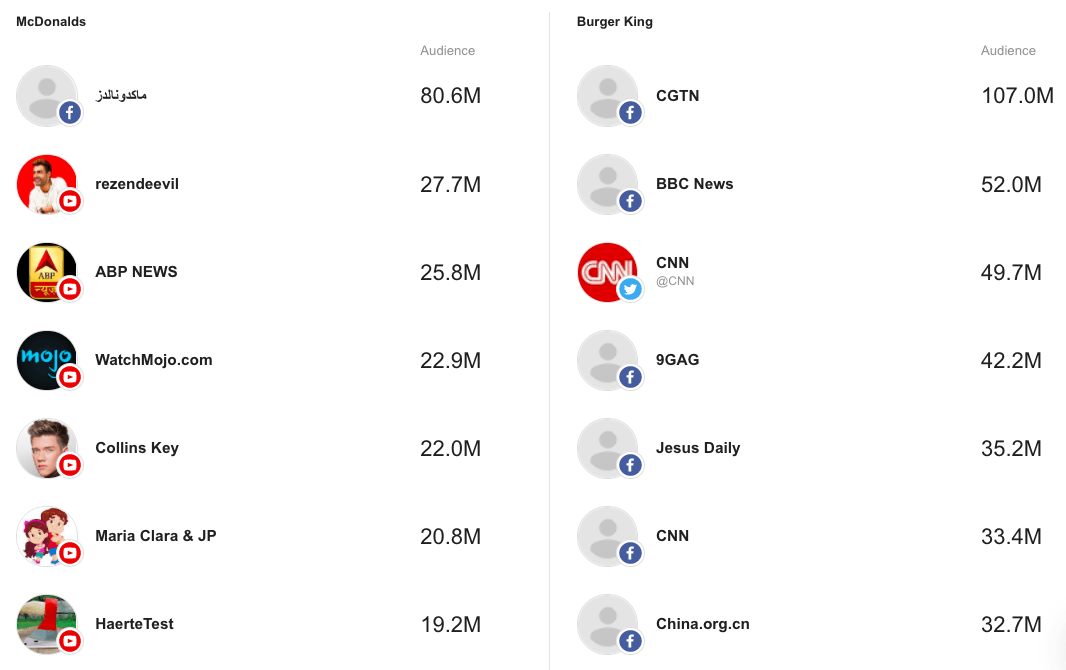 As you can see, the biggest names behind mentions of McDonald's are mostly actual human influencers with large followings. Burger King, meanwhile, has mass media and publishers' accounts as its biggest mentioners. Naturally, this doesn't mean that the media and publishers do not mention McDonald's — quite the opposite — but the brand gets so many shout-outs from human influencers that they collectively outweigh media coverage, generate tons of user engagement, and ensure McDonald's winning online visibility.

By analyzing brand mentions, Awario reveals a lot about the people behind them. Let's look at the analytics to try and understand McDonald's and Burger King's respective audiences better.

The topic cloud for both of our brand monitoring alerts is full of references to viral posts, trends, and popular topics discussed online. As you can see, the triumphant 'hotel air conditioners to McDonald's Sprite' comparison from earlier is the topic of discussion. Well, there's more.

It's a popular opinion that McDonald's serves a superior version of Sprite. An opinion like this is very fertile soil for social media discussions. Below are some examples we found while examining the topic cloud.

The superiority of McDonald's Sprite and the kind of buzz it generates on social media makes it the #1 most-discussed fast-food menu item in the past 5+ months. When it comes to staying in the public eye, McDonald's establishes itself as the leader, with enough legendary products to be social media's fast-food for thought for decades to come.

Last but not least, we were interested to see the world as divided between the fast-food superpowers. For this, we calculated geotagged mentions from unique authors and compared McDonald's and Burger King's influence in each country. For a country to get on the map, there had to be at least 50 unique social media authors who've posted about either of the fast-food giants in the past 5 months. Let's see what we got. 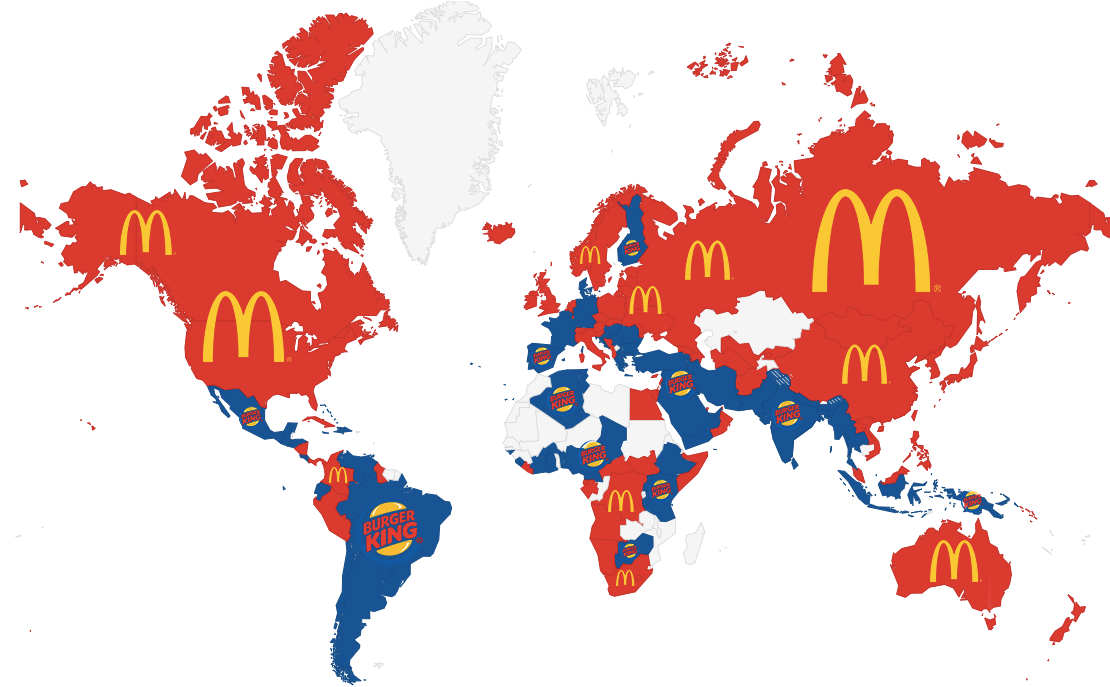 Out of the 160 countries that made it to the map with a minimum of 50 unique authors, 82 cast their social media votes for McDonald's, and 78 stay with Burger King. Although it doesn't look even — with McDonald's holding the largest countries — the world is split rather evenly between the fast-food chains.

Naturally, we also wanted to check the situation on home ground. After all, the McDonald's and Burger King rivalry emerged from the U.S., and it would be interesting to see the division of powers there. 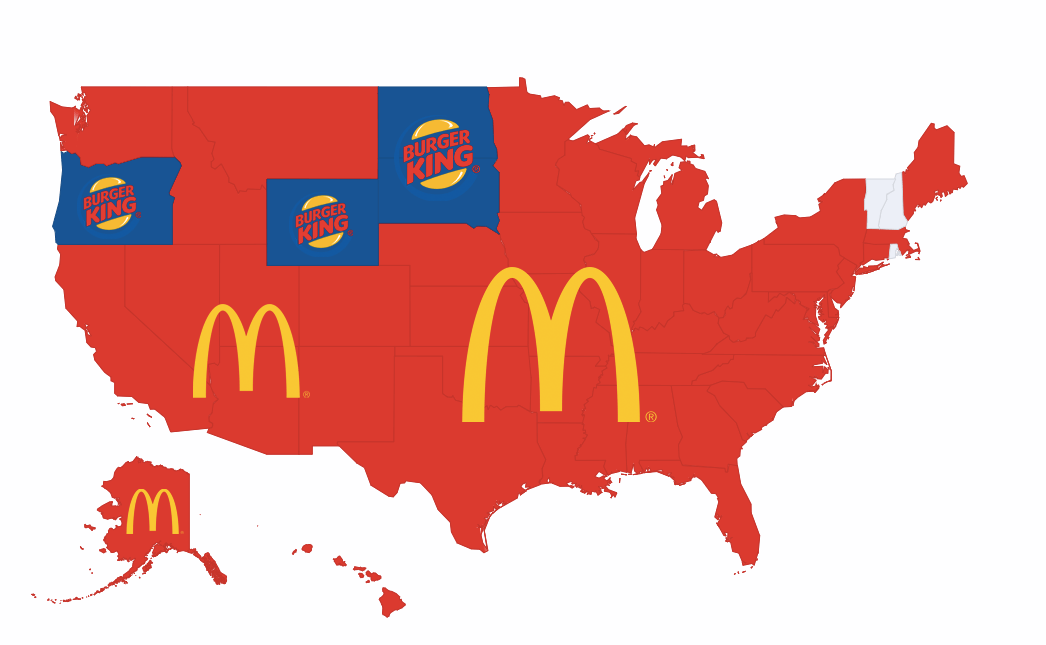 It turns out the division is not at all even! Out of the 49 states that made it to the map with a minimum of 50 unique social media authors talking about the fast-food companies, the majority chose to discuss McDonald's, and only 4 states — North and South Dakota, Oregon, and Wyoming — favored Burger King.

Your order is served

We used social listening to collect and analyze over 2 million mentions of McDonald's and Burger King to determine which fast-food giant holds a bigger place in consumers' hearts. Here's what we found out.

All things considered, the McDonald's brand wins in terms of social media presence and user engagement. But the brand war is very far from over, and Burger King might be making a comeback any time soon, on social media and elsewhere.