Why everybody loves M&Ms: a marketing success story of a brand mascot

I have a friend who, till the age of 12, genuinely thought that all cows are purple. How he managed to live till the age of 12 only seeing cows in Milka commercials is beyond me, but it's a great example of the power of a brand mascot. Not only did Milka manage to create a memorable brand image but it also tweaked one boy's perception of cattle!

In all seriousness, brand mascots can be an amazing solution to several marketing problems. Think about it: what are your most daring dreams for a brand? That it will be original, fresh, authentic, and human. You want people to connect to your brand and, most importantly, remember it after coming across your marketing message, be it a TV ad or a social media post. And what could be better at making a brand human than another human (or an anthropomorphic animal, or candy with legs, you get the idea)?

A mascot makes your brand:

Speaking about connection, oftentimes a mascot can be a shortcut to convey your brand personality. Brand personality consists of many elements: a mascot's design, the way you communicate to your audience, the tone of your social media posts, and your values. That's quite a lot of information!

Why are mascots so effective in conveying this information? You see, from the beginning of human history, we have a tendency to recognize archetypes: a wise and kind father figure, a witty and sarcastic jester, or a cute fairy. When we create a brand mascot we turn to the existing archetypes and use people's innate ability to recognize them. All in all, creating a mascot saves us time and money that would be spent on marketing otherwise.

One of the most memorable mascots to date are M&Ms Red and Yellow. These anthropomorphic candies are probably the first thing to come to your mind when you think about M&M's. They even have their own fandom wiki!

I wanted to dissect the success of this mascot and see how you could possibly replicate this lightning in a bottle in your own strategy. Of course, as always, I heavily relied on social listening to analyze M&M's strategy. In this blog post, we will go through the history of the mascot, how M&M's uses it in advertising and social media strategy and how much buzz it generates online.

The short history of the M&Ms mascot

Imagine: it's 1995. Gangsta Paradise and TLC are blasting from every car window, every time you turned on your computer you saw Windows 95 logo, and Friends was a new show. But M&M's were not doing so well, the sales were not growing and the brand started to blend in with other types of candy. They called in BBDO marketing agency to help them — and they did!

The agency wasn't given a huge budget so they had to come up with a way to include all the strategy, media buying, and production work in a relatively inexpensive project. Nevertheless, they came across a truly million-dollar idea — they took the colors of the candy and turned each of them into a comedic character. 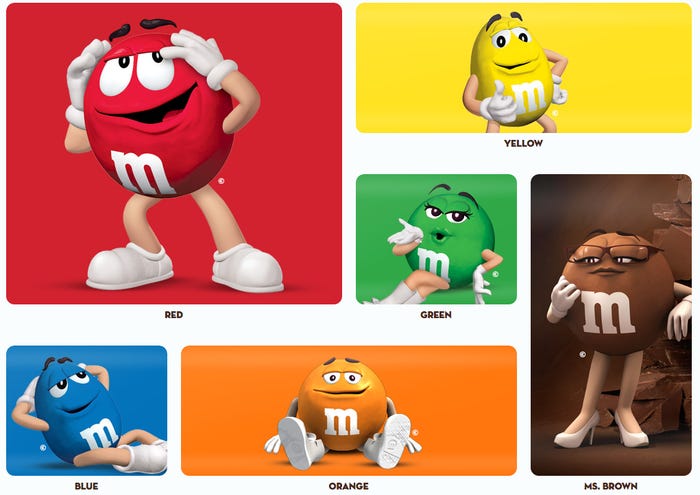 As you see, one word is enough to describe a character — thanks to the concept of an archetype that we've covered earlier.

Once they were introduced, the characters overran the brand's advertising and packaging. They were everywhere: on the packs of candy, in the stores, and in the TV ads. Occasionally, M&M's would pull away the characters from TV ads which would immediately cause a barrage of concerns and questions about their disappearance. The anthropomorphic candy became the staple of M&M's marketing.

Of course, Red and Yellow were not a deus ex machina for M&M's struggles, and the company still allocated a lot of resources to introduce their likeness everywhere. However, as you can learn from this story, a brand mascot is a great tool for when your company:

Of course, when they were designing the characters, M&M's took their audience into account: on one hand, talking and walking candy is what appeals to kids, on the other their witty comebacks are greatly appreciated by adults. Moreover, an ensemble of characters allowed M&M's to build narratives for them to play off each other — that worked for engaging content.

So, if you've decided to come up with your own brand mascot, here are the things to consider:

Of course, M&M's went all-in on branding and putting their mascots on everything, but you don't have to do that. Your mascot can live on your social media or have a life-span of one marketing campaign — as long as it works for your marketing goals.

So, from the looks of it, M&M's is thriving and its mascots played a major role in it. We can use social listening to support these claims with hard data. I used Awario to monitor mentions of M&M's across the Internet and see what role do the mascots play in these conversations.

Social listening analysis: how popular M&Ms and its mascots are

I've set up an alert with the keyword M&M's and used ++ Boolean operator to make sure the tool takes into account special symbols like & and '. You can learn more about Boolean operators and how to use them in this post. I also blacklisted M&M's own social media profiles to make sure I see the conversation from their customers and not from the brand itself. 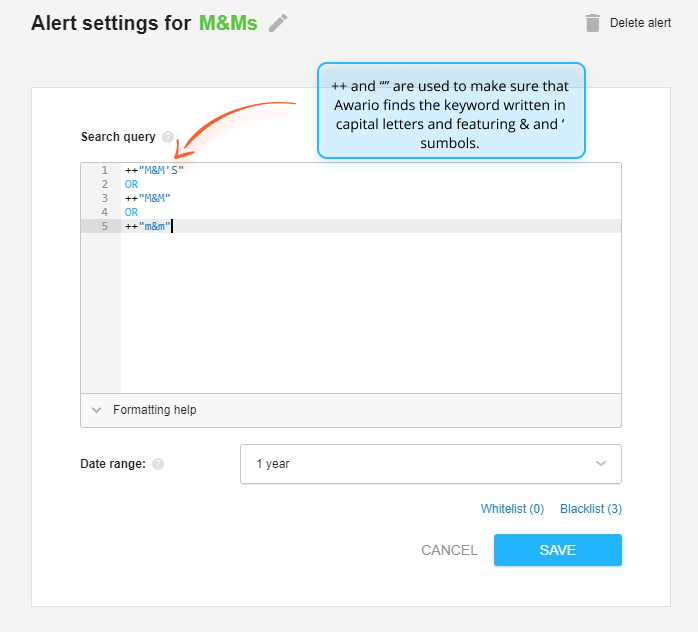 The best indicator of popularity is a company's brand awareness: and in Awario this metric is described by Reach. I checked out the Mention Statistics report. In 30 days M&M's earned 886.7 million impressions and was mentioned more than 14 thousand times. 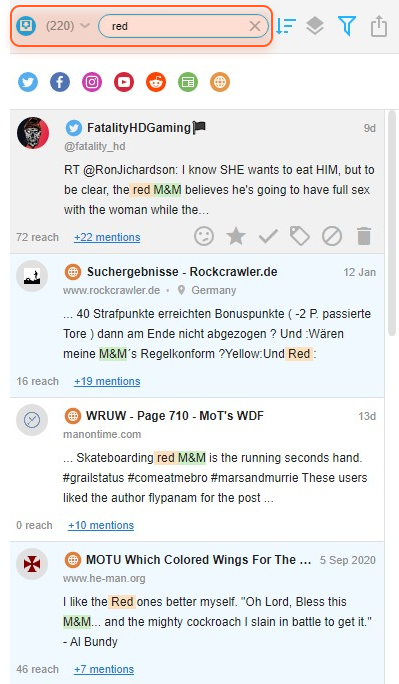 Mentions of M&M's that included the word 'red'.

According to Awario, Mr. Red was mentioned 220 times. Mr. Yellow is significantly less popular, getting only 72 mentions.  A lot of these mentions referred to TV ads that featured the mascot.

I know SHE wants to eat HIM, but to be clear, the red M&M believes he’s going to have full sex with the woman while the yellow one watches from the wardrobe?

Ms. Green, being the first lady of M&M's gets a bit more buzz than Mr. Yellow: she was mentioned 293 times. 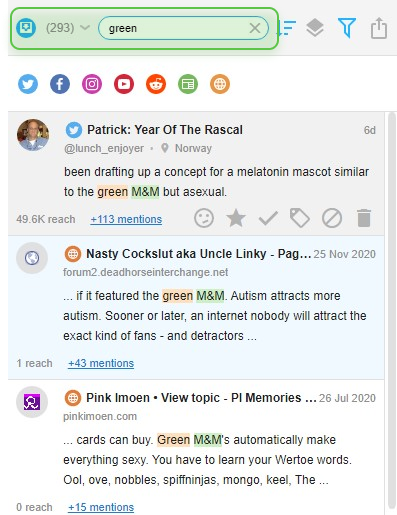 Some of these mentions were quite inventive!

As you see, a lot of conversations around these mascots are not really about candy. What stood out to me is that they are quite... adult. One way to explain this is that children who watched M&M's commercials at the beginning of the 2000s are now grownups who want to discuss the other sides of characters.

But the other thing is that M&M's TV ads already feel grownup — not in a bad way, there are just a lot of jokes, references, and wordplay that children are not able to understand. Let's take a closer look at the advertising and see how M&M's mascots are used there.

How M&Ms uses its mascots in advertising

Looking at social listening analytics provided by Awario, I've noticed that on February 10 there was a sudden spike in positive mentions and reach. Once I clicked on the Insights, I figured out that the reason for this was M&M's Super Bowl ad. 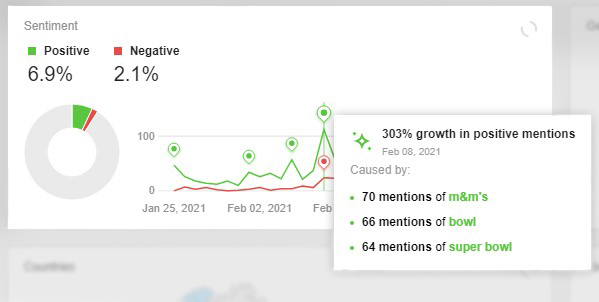 Dan Levy guest+starred in the commercial that features three M&M's characters: Ms. Green, Brown, and Red. The concept is that people are apologizing to each other with the packs of candy: and the reasons they are apologizing for are very current. In the ad, M&M's makes fun of mansplaining, gender reveal parties, and the name "Karen".

As I mentioned before, while this ad features cartoonish characters it's not directed at children at all (that's an obvious choice since I don't think that many children watch the Super Bowl). It's a great example of how a mascot that looks like it's directed at one audience actually appeals to another audience thanks to writing and tone of voice.

Can definitely see these ads as the ones people want to watch again - they're entertaining and/or beautifully shot (Jeep). The M&M spot was the one that made me want to actually buy the product - have some on hand to give out ?

Starting in the 2000s, every M&M's TV ad featured the mascots, mainly Red and Yellow with occasional appearances from Ms. Green and Brown. The combination of humor and memorable characters led to their overall success. Those TV ads became a part of pop-culture and the compilation of the funniest M&M's ads on YouTube has more than 43 million views.

M&m's commercial, does anyone else remember this? from r/Commercials

In addition to TV ads, the characters are represented in outdoor advertising and M&M's World stores around the globe. The posters and banners keep the sense of humor, wordplay, and innuendos typical for TV ads. 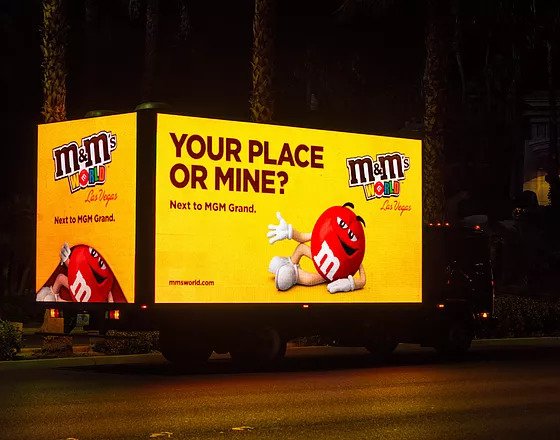 Don’t miss our next story!
Join our blog community and have the freshest content emailed to you.

If you want your mascot to be as successful as Red and Yellow; here are some sweet tips for you:

How M&Ms uses its mascots on social media

M&M's company was founded in the 40s and their main challenge is staying relevant almost 80 years later. One way to do it is through social media.

M&M's main social channels are Facebook, Twitter, and Instagram, where they post every 2 to 3 days. Their social media strategy includes appealing visuals, video, product promos, memes, recipes with the candy, and A LOT of interaction with their followers. They ask questions, run contests, and do giveaways. They also use a lot of hashtags, especially on Instagram. As a rule, it's a combination of general hashtags (#chocolate, #candy) and branded hashtags (#mms).

Social media is another channel that benefits from the "human" nature of mascots and different personalities of colored candies that M&M's created. Social media is primarily a channel to engage with other people, and by presenting your brand as more personable and human, you encourage people to engage with it. As with advertising, mascots are featured on every social media page.

In addition to that, almost every other social media campaign stars the characters, be it a new product launch or a holiday marketing campaign.

For example, one year for St. Patrick's day the brand ran a social media competition where you could win a trip to the USA by sending a kissing selfie. The face of the  #kissmeimirish campaign was Ms. Green — her color and flirty nature were perfect for this kind of competition and probably inspired the campaign in the first place. 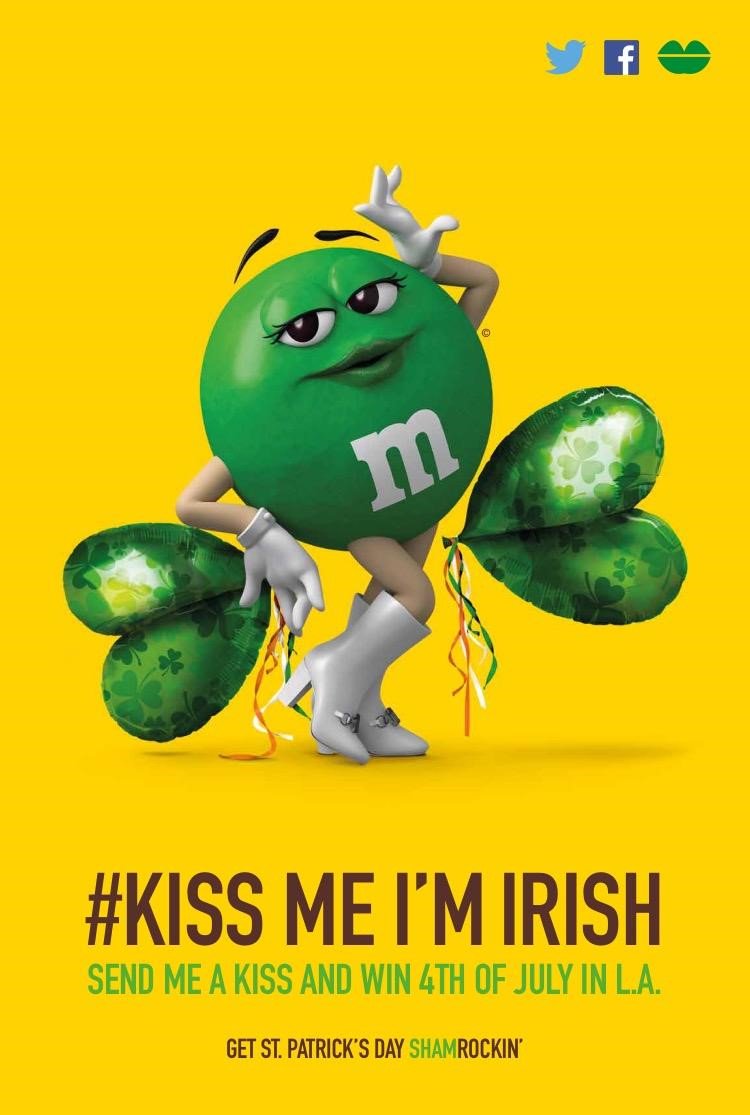 Another great example is a charitable campaign M&M's did for Red Nose Day. It's a worldwide event in which comedians and celebrities participate to raise money for charity. M&M's joined the event with #MakeMLaugh hashtag and encouraged its followers on social media to tell jokes with the hashtags, donating money for each joke made. They partnered up with a number of social media influencers including John Cozart to raise awareness around the campaign.

Challenge: open @mmschocolate with NO HANDS...
Join in and raise $1 for #RedNoseDay by tagging #MakeMLaugh :] #ad pic.twitter.com/bw8y6EcXEq

The reason why mascots are such a powerful marketing tool is simple: people are always looking for a reason to relate to a brand. A good mascot makes it ten times easier.

Make sure you give it a personality that complies with your brand image and is likable and you're good to go! Maybe in 5 years, your mascot will be as much a part of pop-culture as M&M's candies are! 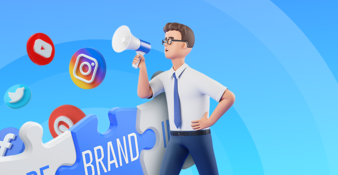 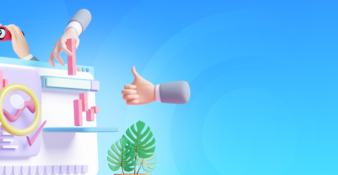 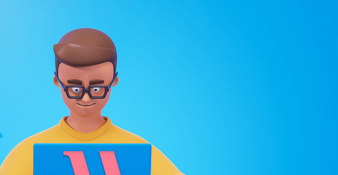