Amanda Palmer is an American singer-songwriter of the duo The Dresden Dolls, a solo artist, an ex-member of Evelyn Evelyn and the current member of Amanda Palmer and the Grand Theft Orchestra. Her music is described as punk cabaret - a niche underground genre, to say the least. 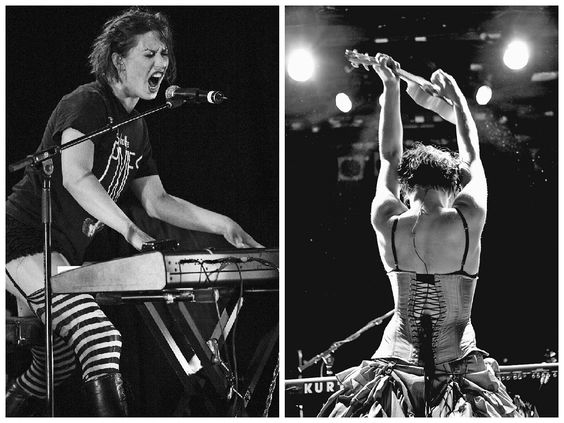 Amanda Palmer was the first artist ever to get nearly $1,2m for her Kickstarter campaign, although the goal was $100, 000. This remains to be one of the most successful crowdfunding campains of all time. The money came from around 25, 000 people - the same number as the number of CDs sold when she was working with the label. Amanda is the one to encourage downloading, torrenting, and sharing music for free on sites like Soundcloud. While huge musicians condemn free art of all sorts as the biggest evil in the world; while shops like HMV are experiencing crisis after crisis after crisis, she gets a million by simply asking and proclaims that that’s the future of music. What’s the secret? According to Amanda Palmer, it’s social media. 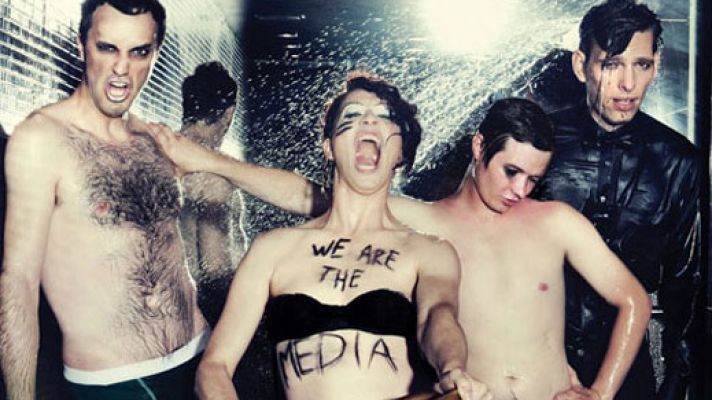 In the music circles, Amanda is hailed as the Queen of Social Media. In her opinion, it’s everything she’s done prior to the Kickstarter campaign on media and beyond that, that made it so incredibly successful.

Her story, tactics and philosophy are mostly about making money from art. However, in my opinion, many things can be applied to small businesses as well, the ones that aim at 25 000 loyal customers as opposed to millions of one-time shoppers. Many can be also applied to people that sell their own personal brand. Some are for artists exclusively.

So what does Amanda Palmer do that makes her story a social media success story?

Every famous YouTube blogger will tell you that transparency is the core of their social media strategy. YouTubers know what they are talking about: they are entertainers, they sell their personal brand. Artists, however, and I mean niche artists as opposed to stars like Rihanna, still believe they can write music in the basement like in the 90s and only tweet about the upcoming albums. Well, if you want real influence and exposure from social media, that’s not the way.

The essence of Amanda Palmer’s social media philosophy is that she shares everything about herself. Not only good videos, photos, and ideas - all of them. 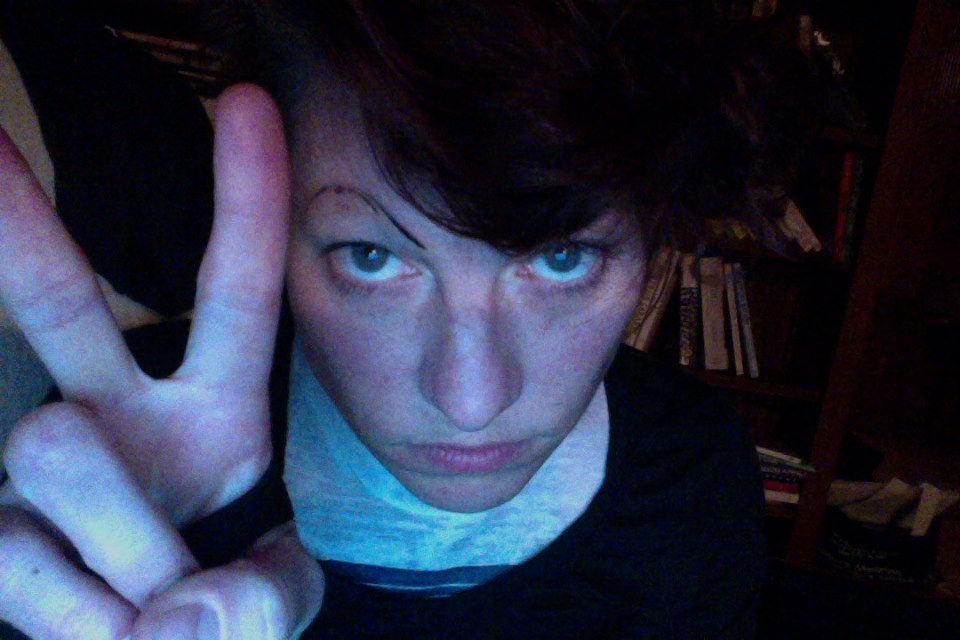 She doesn’t filter any information, doesn’t use Instagram to look differently, and uploads songs that were just written on YouTube. She talks about her mistakes and hangovers; re-tweets people who praise her and criticize her. She lets her audience know her as much as they possibly can - the true, uncensored, imperfect version of herself. And her fans value that. They feel like they know her, because, well - they know her! Fans repay for this with trust - they fund her art before the albums, books, and videos are even out.

Amanda is on social media every day. She writes on Facebook, Twitter, her blog, posts things on Instagram. Her site is full of the most interesting material. She communicates with every one of her fans. She asks for their opinions, reads comments, replies to everything, watches the art her followers send her. It’s a two-way relationship all the way. Here’s a quote from one of her interviews:

“If I’m in a city and I Twitter for a good vegan joint for dinner, I’ll get 200 responses, and I’ll answer and say thank you. Those interactions create the environment and the community where something like this happens.”

Amanda talks often how in the times of email, she and her band mate Brian would sign 500 copies after the gig and then reply to every fan email, and then the connection would sort of end there. That’s why they welcomed the appearance of social media. “Now that I have Twitter, anytime I have 20 minutes of downtime, I can have mini-conversations with my fans on the fly.” - Amanda says.

When asked how the companies can translate this approach into their experience, she cites her experience losing her wallet in Europe and tweeting about her plight. She received a rapid response from American Express offering to help. “In this moment of panic, lost in France with no wallet, a human from AmEx reached out – it blew my mind. That’s a moment any company can learn from.”

Here's the kind of tweets and posts her social media pages are full of:

And she shares everything her fans say about her and replies to all of these mentions. 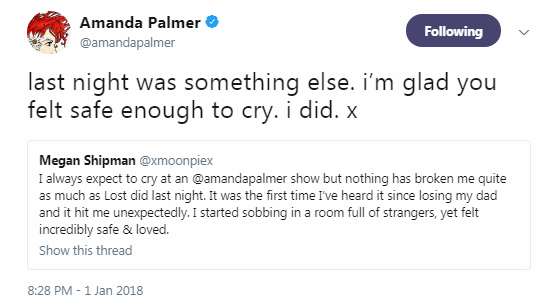 To be fair, these could be two different points. Both of them, however, imply attracting attention. When you comment on current political and other news and events, you attract attention in the social media universe. If you take part and support causes you believe in, like Amanda Palmer does, you attract even more attention. She doesn't do this for pure PR - she is genuine in her beliefs, she's extremely passionate about them, and her crowd feels that. 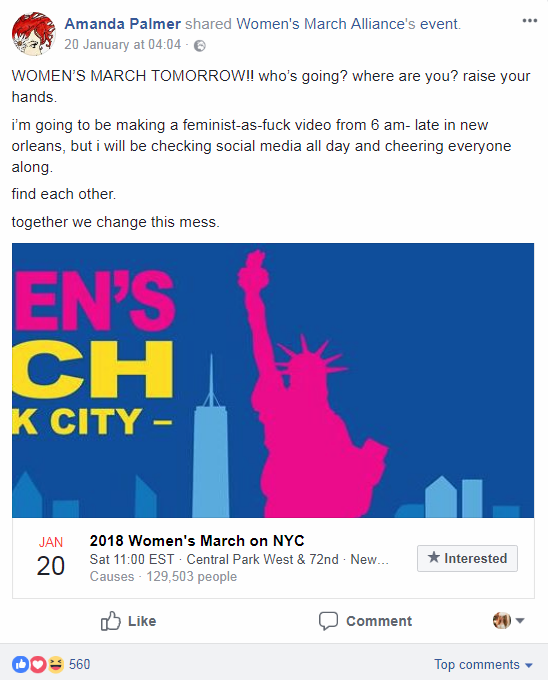 Being provocative may not be for everyone. However, it would be naive to think that Amanda gets the support and attention for her work regardless of her personal behavior. On the one hand, you’d think that nothing can shock the Internet in the 21st century. On the other hand, it’s still the old quirks such as calling yourself Amanda Fucking Palmer (like Martin Atkins and even Gary Vee, who appear more honest and free-spirited because of their uncensored language) and getting naked in any given situation. To her, nudity is a sign of trust as well as a provocative tool. On her Ted talk, she talks about getting naked on the Kickstarter party in Berlin and letting everyone draw on herself. She says, “If you want to experience the visceral feeling of trusting strangers, I recommend this. Especially if these strangers are drunken German people”. 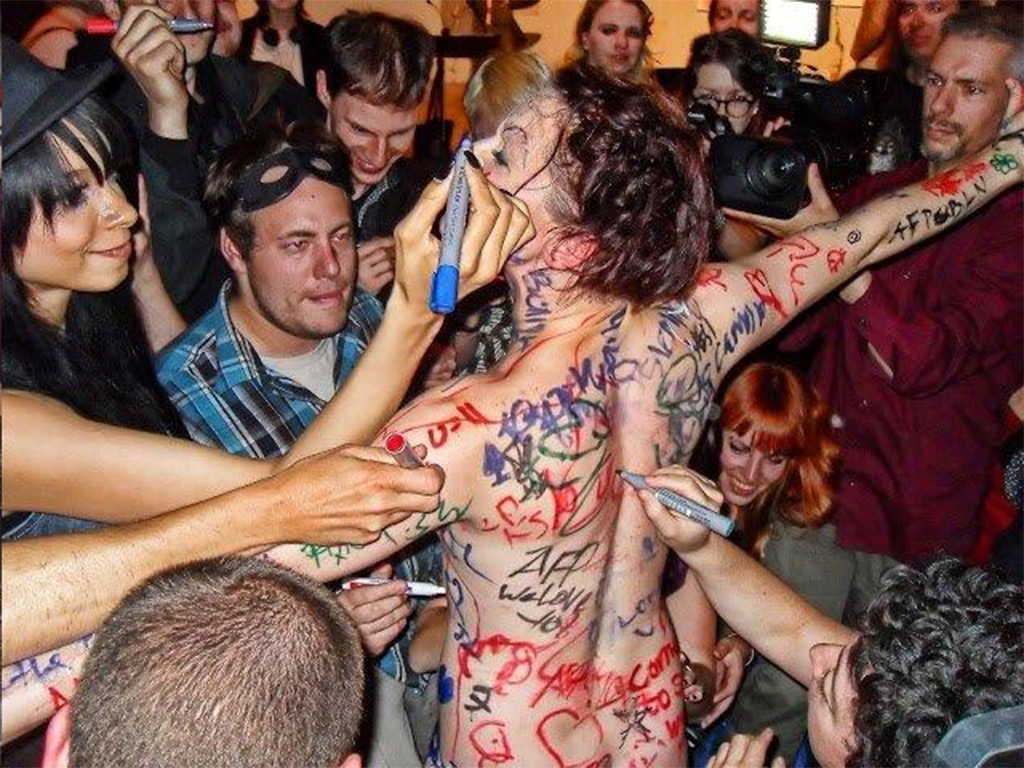 Again, that’s not for everyone. However, there is another lesson to be taken from this behavior: for an artist, it’s important to find a way to connect with the audience in a personal way. Whether you’re sending handcrafted thank you notes or let people draw on you is not that important. The important bit is establishing that personal connection.

Being controversial and opinionated comes with its cost, and it’s important to handle the criticism just as well as you handle the praise. Amanda manages to stay unapologetically herself and still explain her opinion whenever she’s faced with criticism. She replies publically to common criticism: on Ted talk, in her blog, in open letters, in her comments.

According to her, the best way to make money for art is to ask for it. She asks for help shamelessly, all the time. Her Ted talk is on the art of asking. In it, she recounts her early days as a living statue in Boston's Harvard Square. When someone dropped money into her hat, she'd hand them a flower: "We would get a profound moment of prolonged eye contact. My eyes would say, 'Thank you, I see you.' And their eyes would say, 'Nobody ever sees me, thank you.' She sees asking for money as a fair exchange, as the future of art, as the best way to make yourself noticed. In the Kickstarter campaign, depending on how much the person donated, Amanda's fans would get an album, or some artwork or even, for $5,000, Amanda herself turning up to play a concert in their home. While touring, she asked for a place to sleep, for food, for venues. She fights the scarcity mentality. And it works, up to people coming up to her at the gigs and giving $10, saying that they’ve burned her CD from a friend.

That’s the advice Amanda gives out to all artists out there. Ask for help, whether it’s money, or sharing a link, or retweeting, or any other ways your audience can show you they love you. It’s a two-way street. It makes them feel valuable. It makes them part of the community. It’s worth it for everyone, and, thus, not shameful.

Amanda inspired other fields to use crowdfunding and social media. For example: 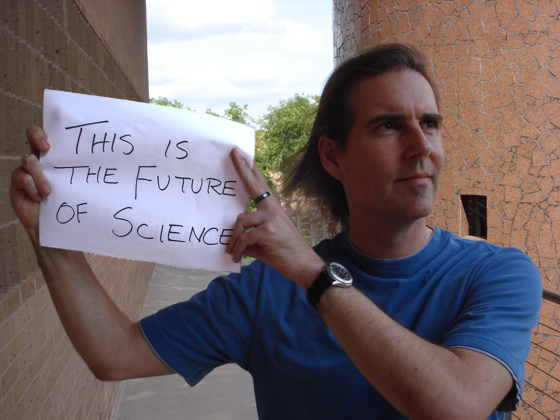 As we know now, crowdfunding hasn't become the future of either art or science. Not yet, at least. However, the Amanda Palmer's way using social media - the one based on trust, connection, and transparency - is here. 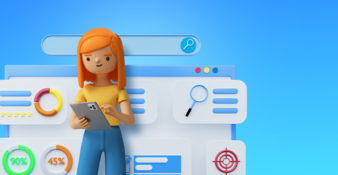