Spotify: the masters of marketing campaigns

Are you working on the best marketing plan ever? We gathered six examples of marketing campaigns Spotify launched for your inspiration. Keep reading to learn how to make people love your brand.

Spotify is an audio streaming platform that revolutionized the way people pay for music. It launched in 2008; by now, there are over 70 million tracks that you can either listen to for free (and get interrupted by ads) or for a fixed monthly price. The latter gives you access to features such as offline mode, improved sound quality, and ad-free listening.

In the second quarter of 2021, Spotify boasts 356 million monthly active listeners, which is approximately four times more than what its main competitor, Apple Music, has.

If you monitor the buzz around Spotify on social media, you'll find that it's 2.5 times more positive than negative.

How did they get word of mouth which is that good? Despite having had an argument with Taylor Swift, being sued by Neil Young and Janis Joplin and, of course, multiple user data leaks.

Well, there is something else Spotify is famous for: its holiday marketing campaigns. They are inspired by the culture we live in. They are endlessly relatable. Each campaign hits its target audience straight in the heart.

So let's take a closer look at them.

In the meantime... Start monitoring your brand.

Since 2008 Spotify has learned its audience in and out. It helps the brand to prepare individualized campaigns based on their users’ interests.

Only You was launched in June to celebrate odd listening habits. Spotify used the in-app experience of the users to make them stand out from the crowd. On the flip side, there was the idea of belonging to a particular fan group behind the campaign: “You are unique, but you are not alone.” (Motivation coaches are applauding now.)

Using in-app features for Only You messages distribution enhanced the emotional bond between Spotify and its listeners.

During the campaign, users could see personal stats around their listening experience (for instance, Your Song Year or Your Topics) and share “a-few-weird-facts-about-me”. Additionally, the Only You creators allowed users to peek at what their favorite artist’s fans were doing. It worked well to unite Spotify listeners around similar musical and podcast preferences. 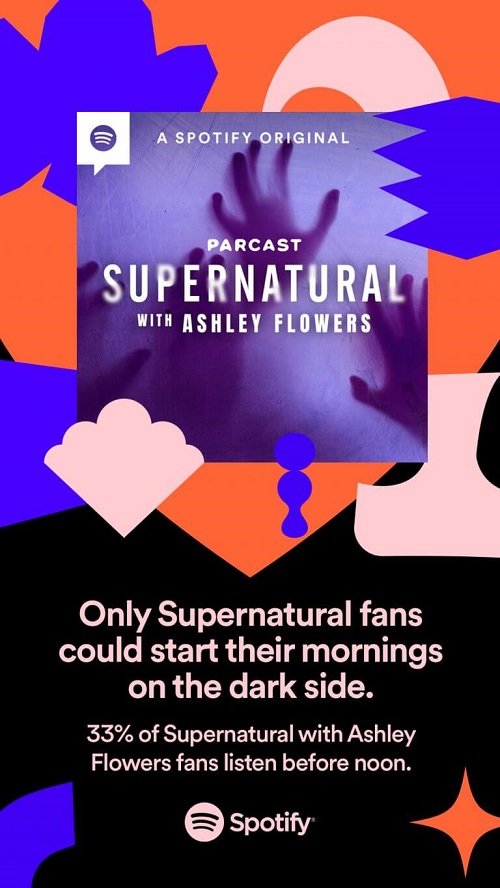 Also, Spotify nudged their users to interact with the app more, increasing the average time listened. For example, listeners could choose three artists who they would invite to their Dream Dinner Party. Once they did it, Spotify created a special mix for each musician “to set the mood of the meal.” It made the campaign more engaging and personalized. 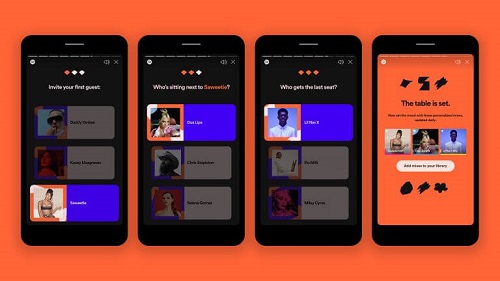 Finally, Only You highlighted the new Blend feature. The sly fellows from Spotify rolled it out with the campaign launching. With Blend, you and your friend can create and share a special playlist curated by the two of you. To blend with somebody, a user needs to invite a friend to the app. What a neat trick to generate new listeners!

This last December campaign was not the first of its kind. Spotify has already launched Wrapped activities before (scroll down to the 2018 paragraph if you want to learn more).

In 2020, this multichannel campaign highlighted a feature that gives Spotify users a personalized review of their listening habits for the year. #2020Wrapped was in honor of musicians and podcasters who “kept all of us entertained, grounded, and informed” within that challenging year of the world health crisis.

As a result, the campaign turned into a short review of that eventful year through the musical preferences of the global nation. 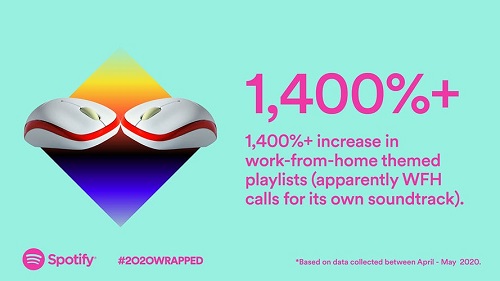 As usual, Spotify spiced its messages up with a good sense of humor and irony. This is why gratitude and resilience, as the main keywords of the campaign, didn’t sound too pompous. 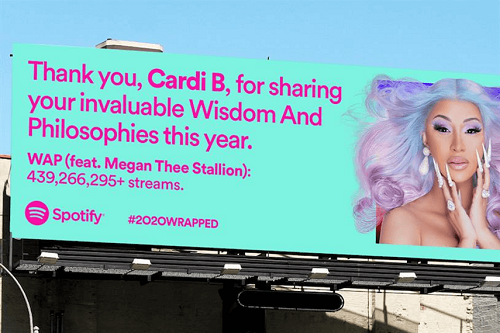 Based on the users’ data, all those Spotify notes didn’t seem out of place. The brand simply touched upon the most relevant topics, including social issues that concerned the listeners within 2020. 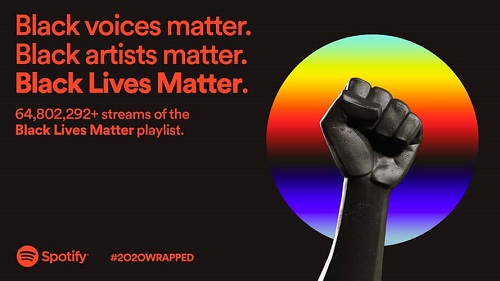 The campaign was targeted by geography that helped get the audience more engaged with those messages. For example, many billboards were placed in the hometowns of artists.

Also, Spotify took their messages over the marquees of American music venues forced to close during the pandemic. The brand did it for the first time to support the industry.

As a result, #2020Wrapped was responsible for increasing the Spotify mobile app downloads by 21% in the first week of December. Additionally, it helped drive audience growth, increasing the number of monthly active users by 29% from a year earlier.

Spotify aims to deepen its relationship with millennials and gen Zs, and there's no better way to do that than by using memes. Memes are insanely relatable; they are the kind of pop culture that makes you feel as though the world understands you and you understand the world. Also, they are funny - I am not nerdy enough to forget that.

Finding the right meme, however, isn't enough. Pop-culture marketing is also about understanding your target audience. Spotify chose to highlight how millennials love self-irony, and billboards like that appeared: 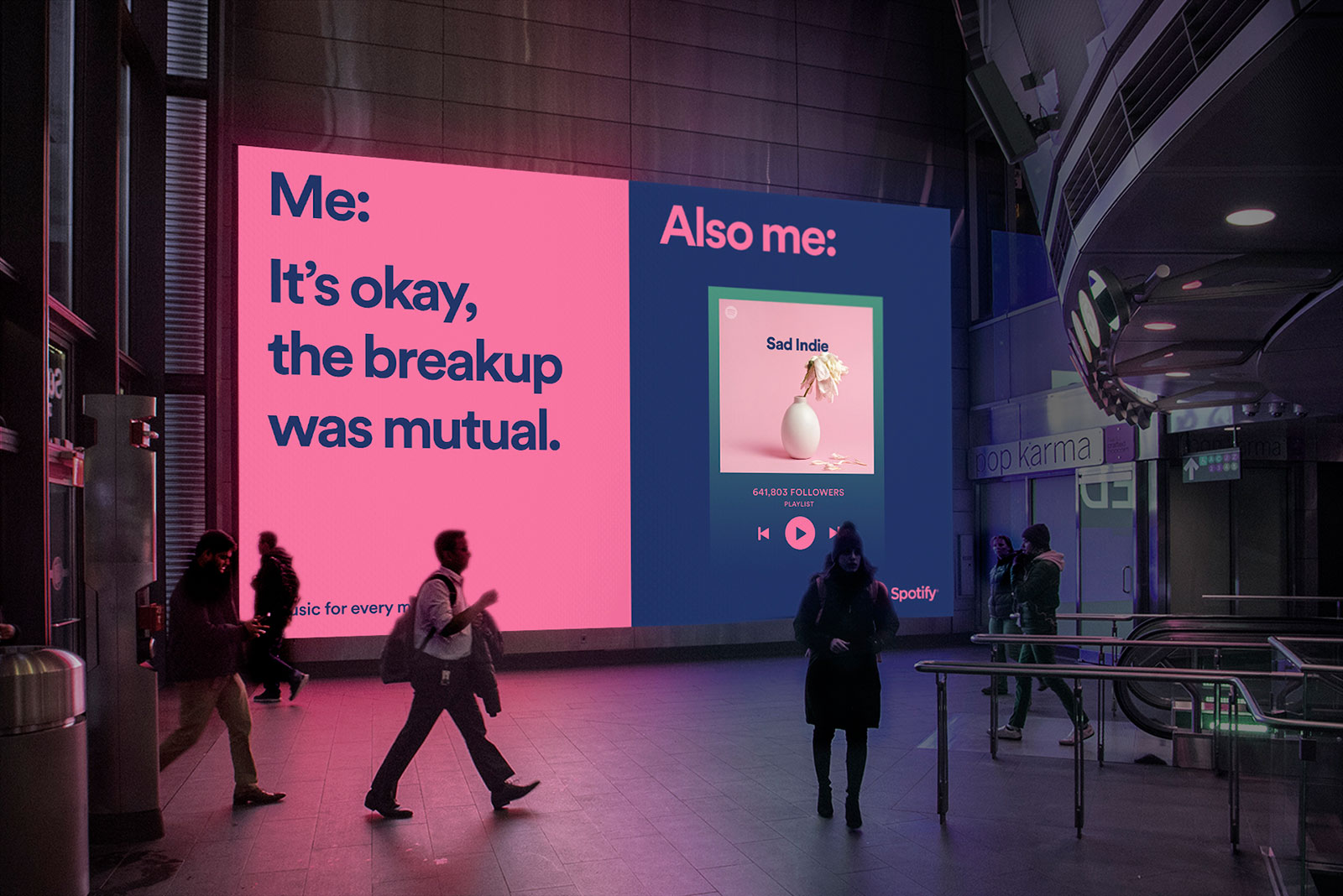 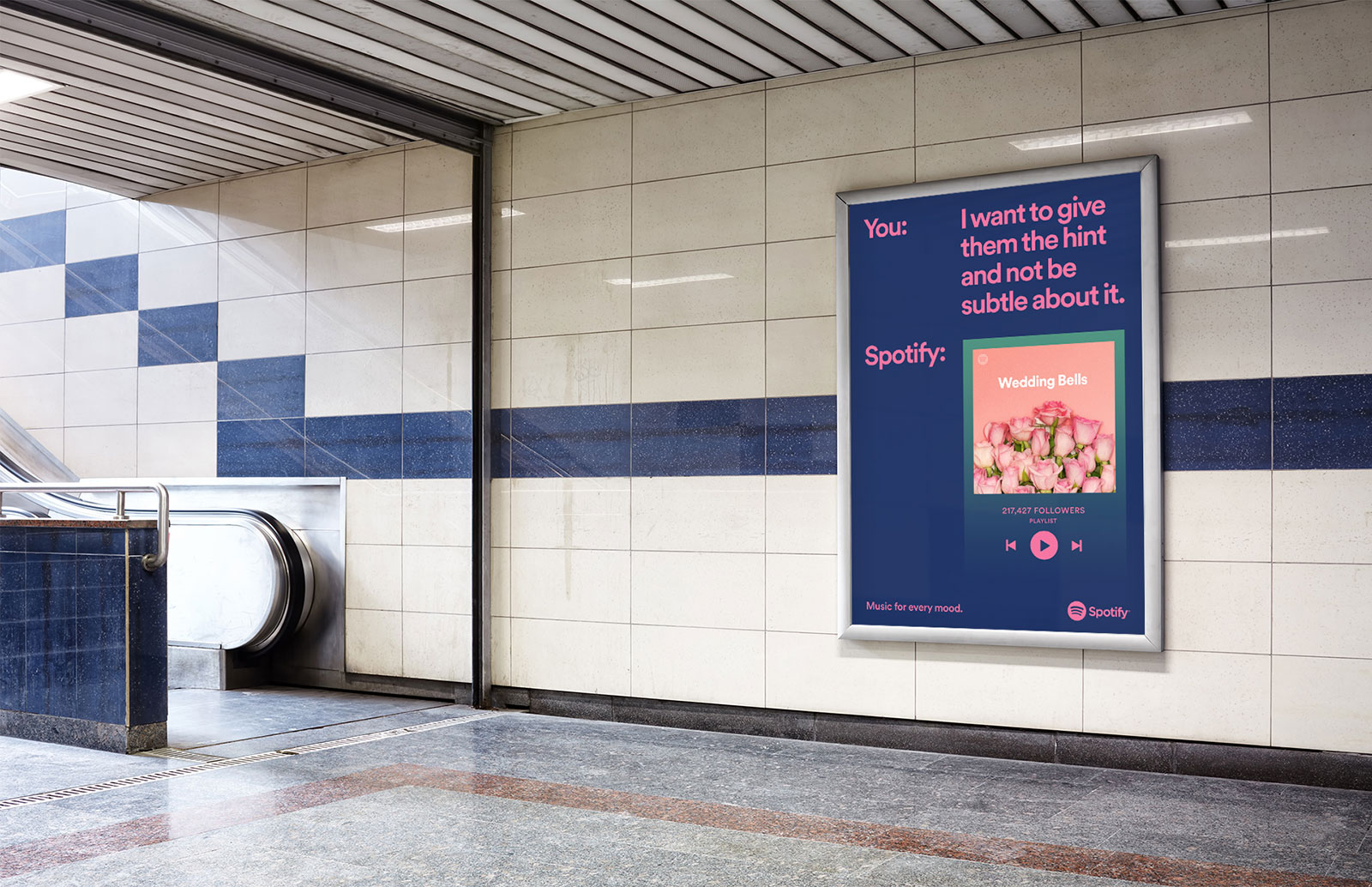 The campaign also promotes Spotify podcasts, letting you know that the streaming service has "A podcast for every mood." 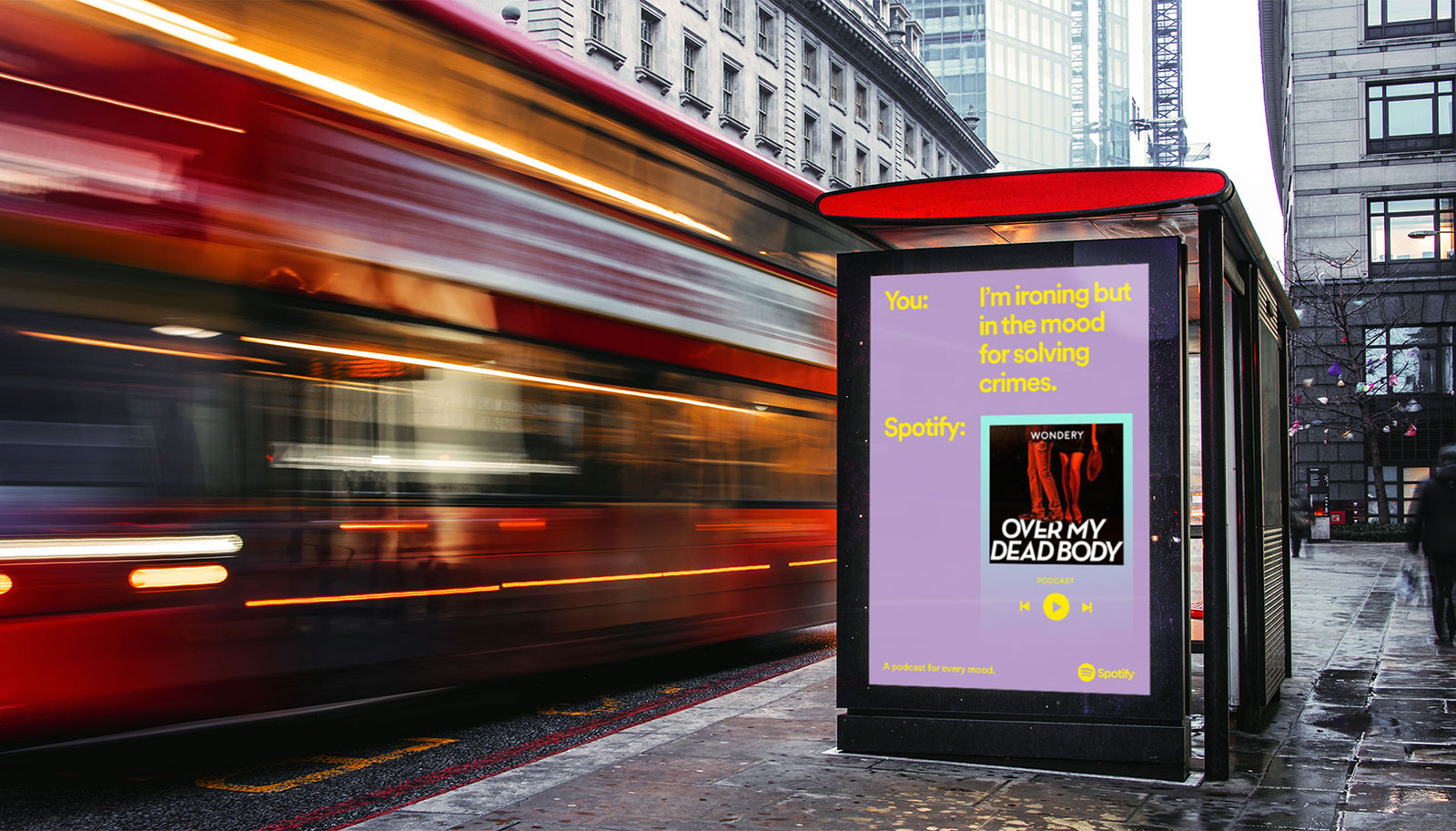 Listening to a thriller podcast over ironing seems fitting. After all, it was Agatha Cristie who said: “The best time for planning a book is while you're doing the dishes.” Naturally, because housework is the sort of work that makes you think about murder.

It's always helpful to have tons of data on your customers. Spotify knows what you listen to when you're sad, when you're happy, and when you're using the shower.

In 2018, they've decided to use this information for a marketing campaign. Why wouldn't they? It's fun and exciting to discover what others' habits are like. Besides, the campaign makes it seem like creating a playlist is an enjoyable process on its own. Well, it kinda is. 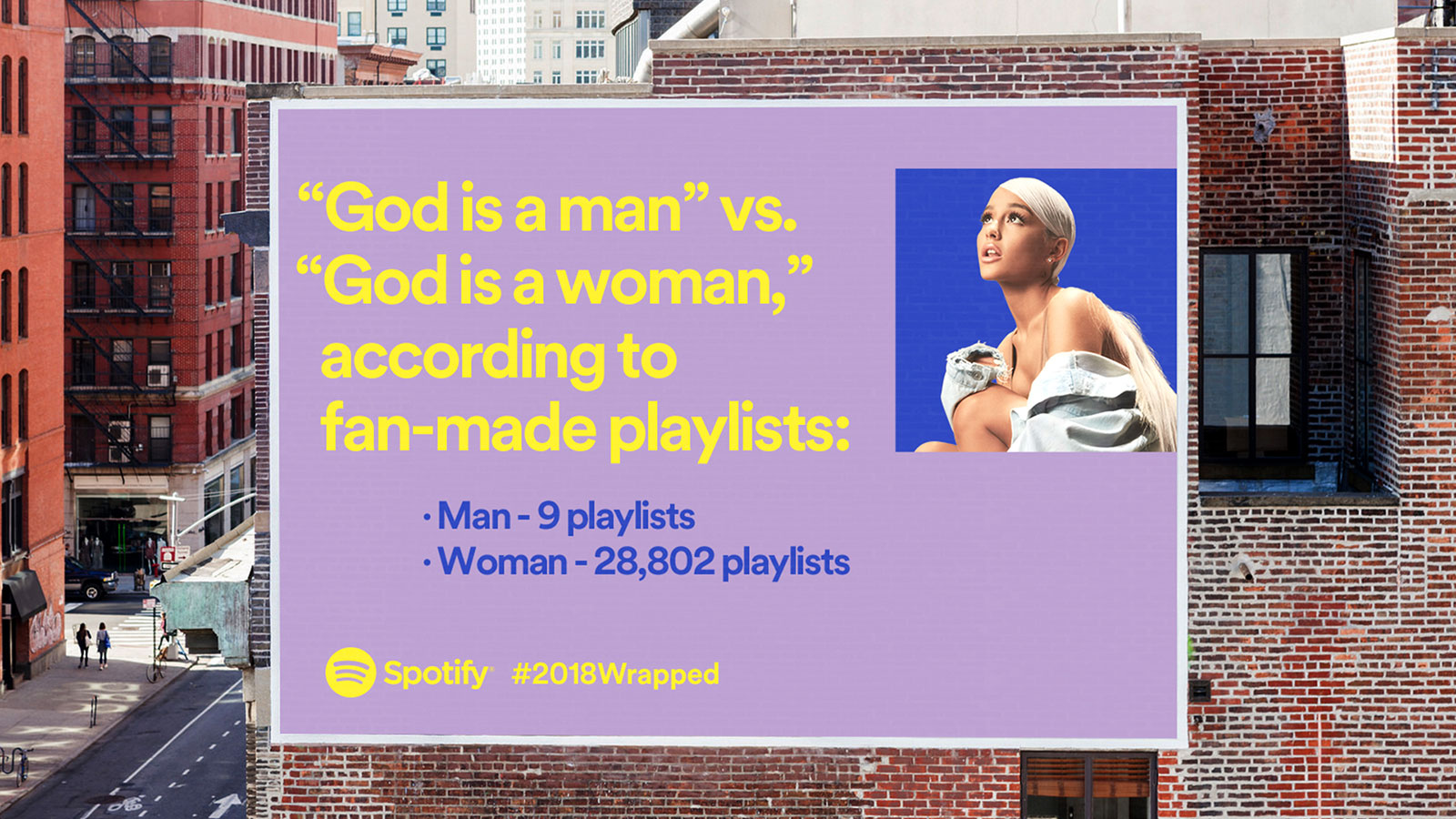 The next big thing is knowing the current trend. What is your target audience talking about? What is the most hyped up topic at the moment? COVID-19 vaccination? Dune the movie? Vegan meat? Politics? Rock-n-Roll?

In 2018, for a not so brief moment, it was an auditory illusion: in the brief audio recording, 53% of over 500,000 people answered on a Twitter poll that they heard a man saying the word "Laurel", while 47% reported hearing a voice saying the name "Yanny". Spotify jumped on the trend. 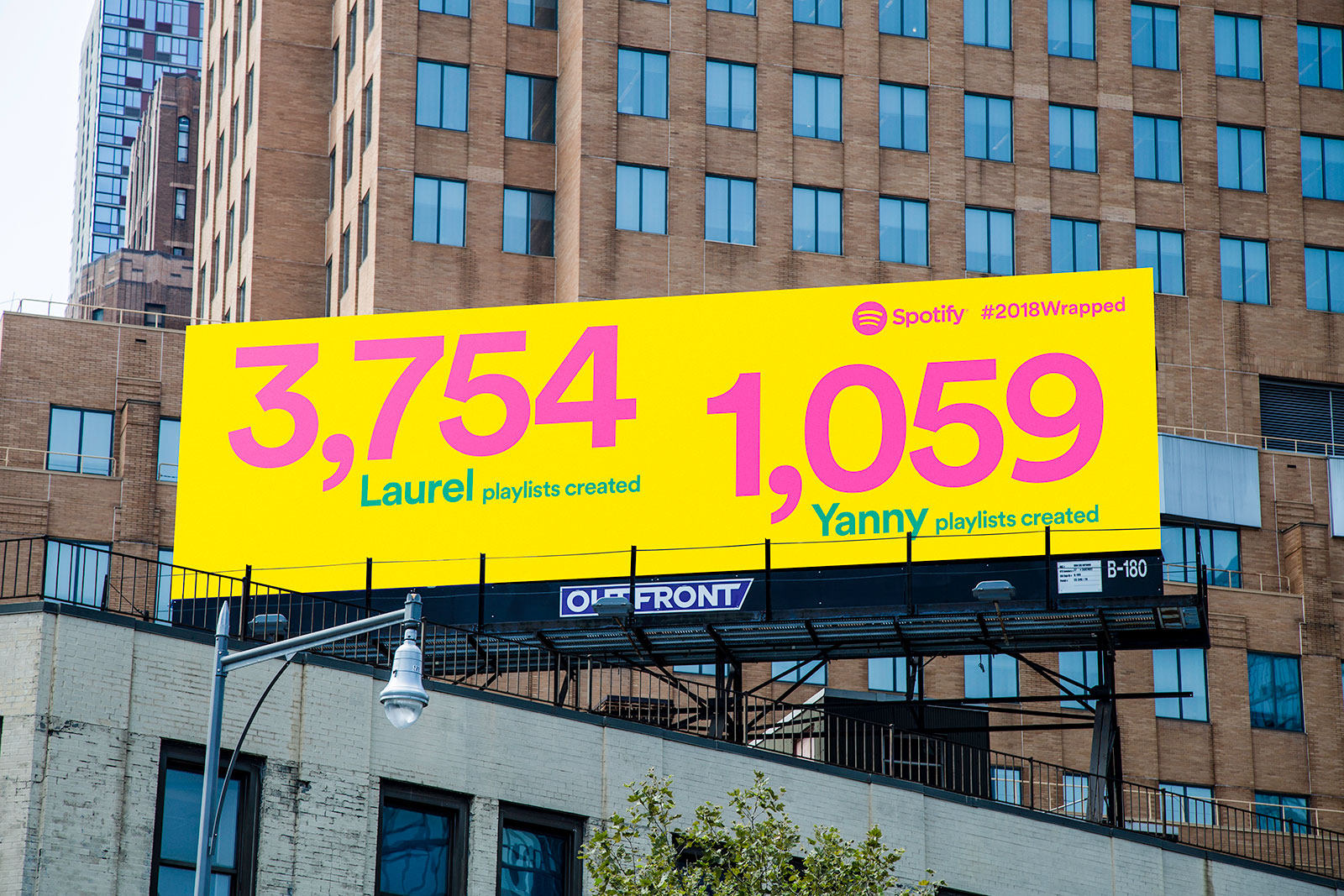 Campaigns like this turn Spotify into pop culture and make its target audience want to join in on the music-streaming fun.

2017 was a good year for Spotify. Their revenue grew by 40% - it was the right moment to attract the attention of the world loud and clear, which is exactly what they did.

#goals was a popular hashtag back in 2017. It's still used today, although not as often. You can still see stories and photos hashtagged #lifegoals, #adulthoodgoals, #relationshipgoals, #hairgoals... The list goes on. On Christmas 2017, Spotify made a campaign where it highlighted goals for 2018. It's all about music and, again, it reveals the habits of other Spotify listeners, and they are hilarious. 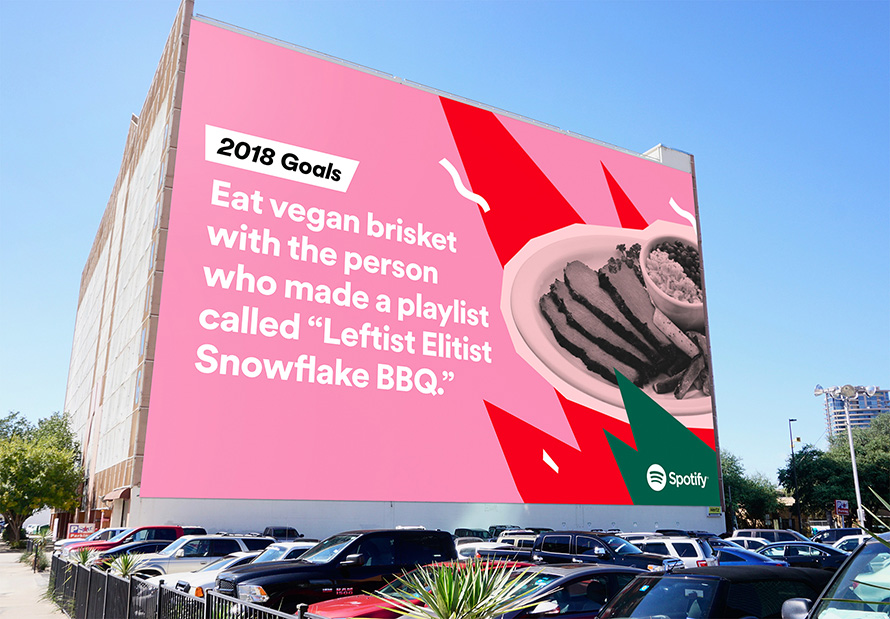 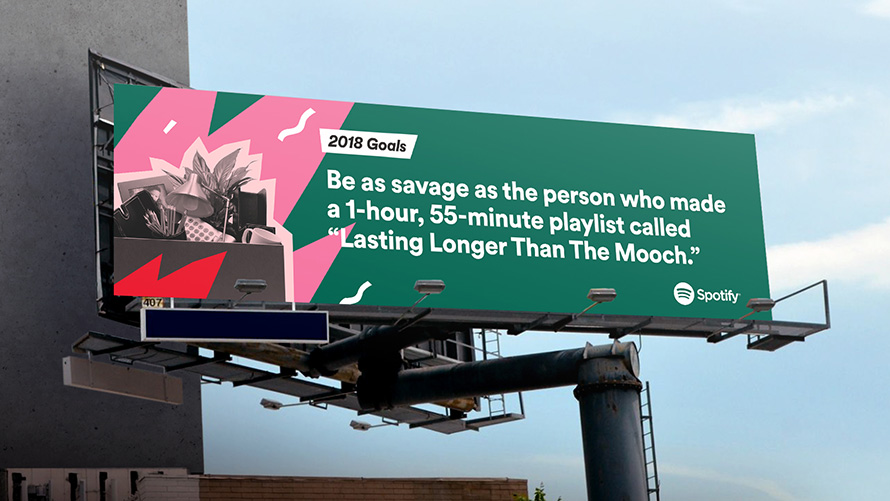 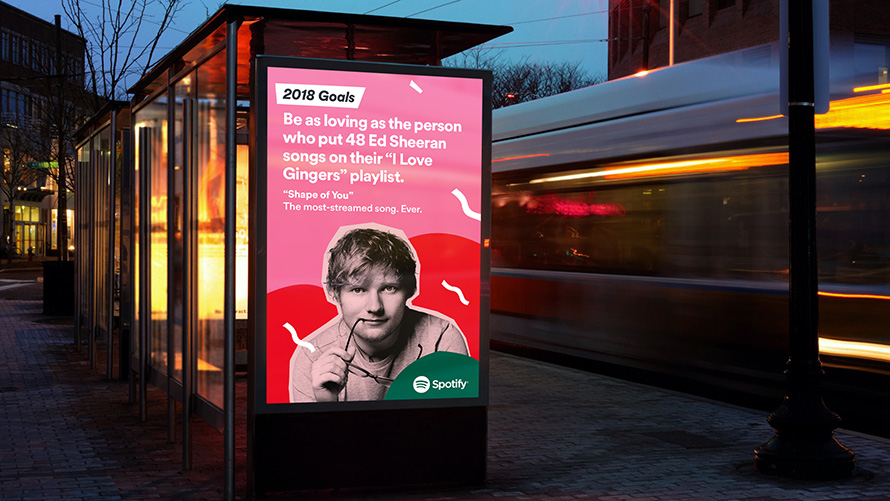 The campaign was a huge success: Spotify saw a rise in subscribers, increased brand awareness, and showed that they care about user data and anonymity. Besides, they presented to their users how they can be very good with the personalized content (which they are!).

2016 was indeed a weird year. Trump, Brexit, celebrity deaths, the Mannequin challenge... Leo finally won an Oscar, Mercury was in perpetual retrograde. 2016 was also the first year Spotify made a data-driven marketing campaign. The campaign did something amazing: it connected Spotify users with Spotify. It showed that people behind Spotify pay close attention to your personal music choices and they care about you and your life in a good way. Not in a we'll-gather-your-data-and-sell-it way. Instead, you imagine how the owners of Spotify get together, look through the playlists, and kindly laugh at people quirks.

Spotify also let you know that the year 2016 is a common enemy. You weren't the only one who felt weird about the year. Probably, everyone did. The message united the audience with Spotify and with each other. 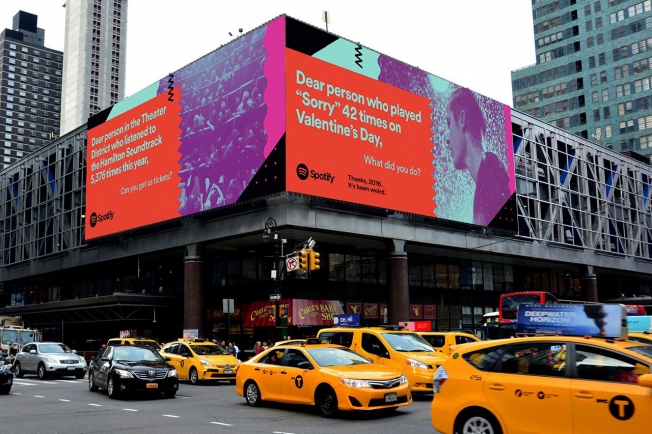 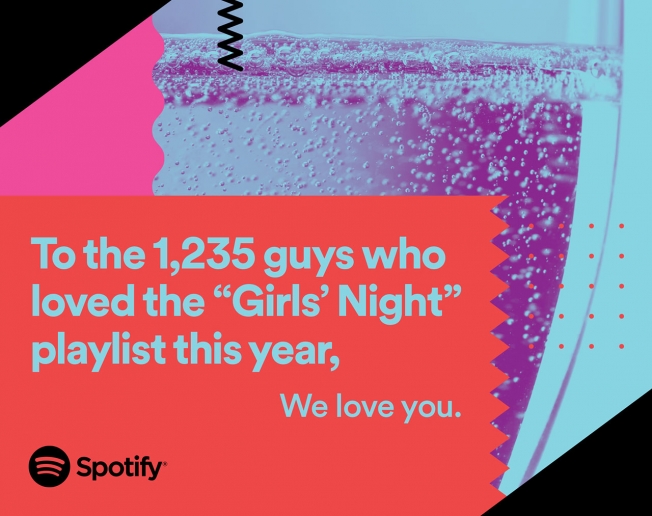 Aren't these billboards wholesome? Don't you just want to share this information with all your friends?

Personalization becomes essential in marketing and product development. Collecting data on customers and then using it to make user experience better and marketing campaigns relatable is what every company should be doing*. Data is exactly what made it possible for Spotify to make on-point, specific ads.

People care about what other people think, do, and say. Best ads aren't about the company - they are about the customers. Let your customers tell a story about themselves, and then see what you can do with it!

3. Make use of trending topics and hashtags

Your customers are permanently immersed in news and social trends. For now, it is impossible to ignore them!

Spotify marketers always seize the moment by wrapping their campaigns into a top-stories-and-events package. As a result, all these billboards and visuals are always an eye-catcher for a big audience.

By the way, social listening tools such as Awario can help you detect the most popular topics and hashtags related to your company or niche.

4. Make use of mentions on social media

On social media, users often tell about their positive (and negative!) experience with products and services. Spotify knows about our desire to pay attention to ourselves. The marketers take it into account, developing the content strategy.

For instance, their Wrapped campaigns are all about personal experience. Creating neat and bright visuals, they exactly wait for tons of brand mentions and hashtags.

The more mentions your brand has, the more people are aware of your company.

5. Make use of a customer-tailored approach

Do you know that 80% of customers are more likely to buy from a brand that offers personalized interactions? This is the way Spotify enchants its customers and gains new users.

You need to create your campaign for each and everyone at the same time. To do it well, meet your target audience first! You can start with demographics like:

Social listening can help you again by showing these stats around people who mentioned your company online.

Intending to repeat the success of other brands, you don’t need to be a copycat. Any company has its own strengths that are worth bringing to the forefront. In the meantime, add some Spotify-like magic to your next holiday campaign!