The US elections: social listening analysis

If you’re American, you must be tired of reading about the elections on the Internet by now. This is not just a guess — according to the Pew Research, 46% of Americans feel worn out by the politics-related social media posts. If you’re not American, coronavirus is probably a more prominent topic on your feed (and I suggest you check out this article to find out more about it).

With hundreds of think pieces, tweets and Facebook posts published daily, and more to come, we just couldn’t pass on the opportunity to dive into social listening data.

And we did! Twice!

Since the Democratic primaries have already begun, I was curious to see if social media listening data trends are actually indicative of how people vote. Obviously, with the USA being the country with a high Internet penetration (87,27% of USA citizens are online according to Statista), the Internet should be a telltale sign for the general public opinion.

The two main questions I wanted to answer with this blog post are:

Can we use social listening data to predict the outcome of the elections?

To answer these questions, I used our social listening tool Awario to gather and analyze mentions related to this election cycle on social media and the web. I collected mentions of each candidate running for the Democratic and Republican presidential nomination, mentions of the Democrats and the Republicans, and mentions of Super Tuesday.

mentions of the Democrats and the Republicans, and mentions of Super Tuesday.

According to the questions I raised, I chose the appropriate Awario metrics, which are:

As you can see, these four metrics allowed me to pinpoint candidates’ popularity and reputation online. Were they reflected in the vote results? Let’s find out! 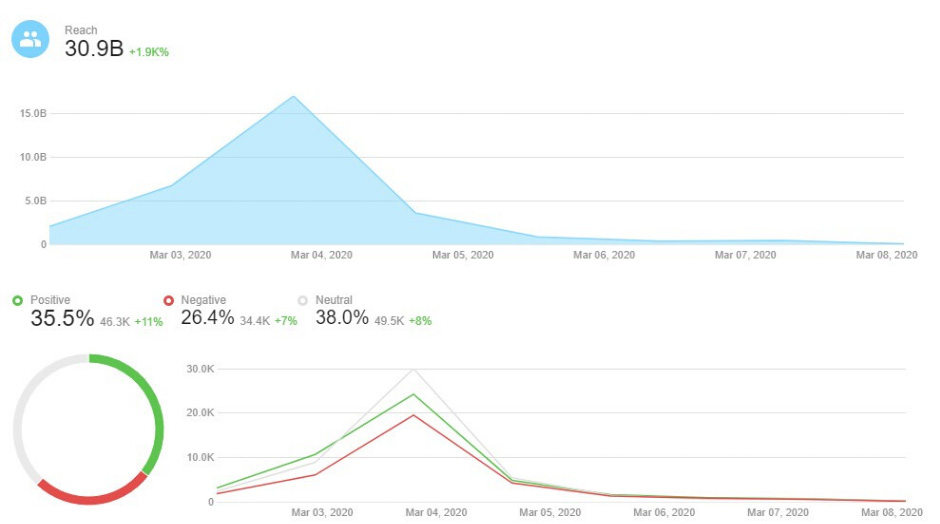 As you can see, the positive sentiment prevails, so we can draw the conclusion that Internet users were happier than not with the results.

Not all of these mentions were positive though: many people expressed their discouragement with the broad political support Joe Biden received ahead of the March 3rd with many ex-candidates endorsing him.

Super Tuesday is a reminder that generally America is terrible at democracy. Every state should have vote by mail, same day registration, automatic voter registration, and polls should be open from midnight to midnight on Election Day. 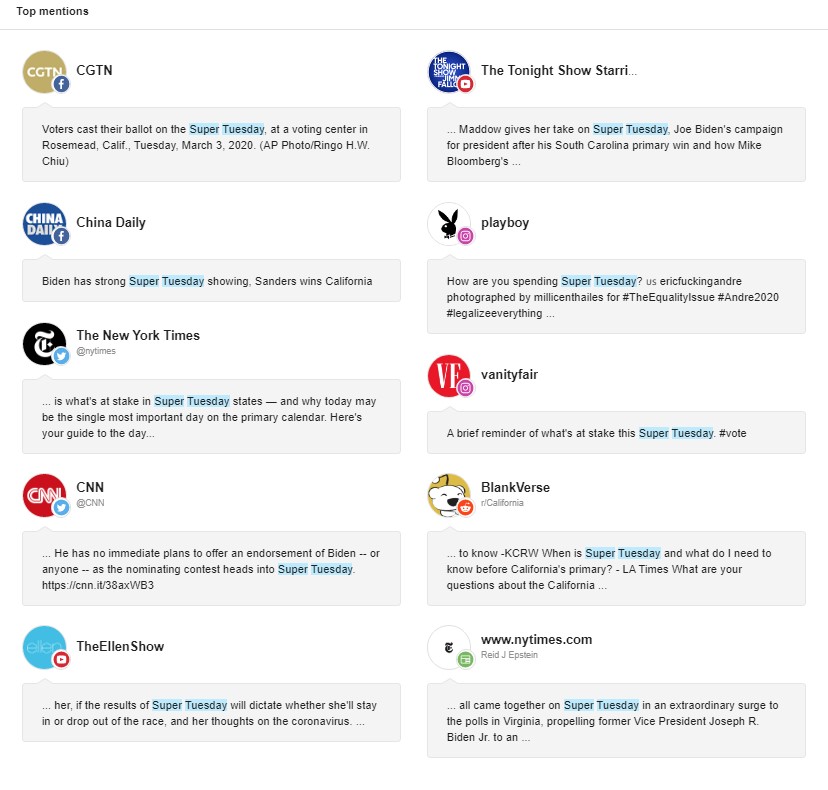 For now, Democratic primaries are much more exciting, with Democratic candidates wielding much more social media data than their opponents. For the Republicans, the start of the election race was much slower and uneventful.

If we compare the sentiment around parties, the donkey party seems to be in a bit more favorable position: the percentage of positive mentions is equal, but negative mentions claim a much bigger share for Republicans.

Nevertheless, if we actually dive into social posts talking about the Democrats, there is a lot of criticism around the latest decisions taken by the party members.

Even if you don't like Bernie, if the democrats are willing to conspire against the people in plain sight, what do you think they're doing off camera? Why would you want these people to lead you?

As for the elephant in the room, one reason to explain such a lack of buzz around the Republican party is its frontrunner. Since Donald Trump is running for the second term, there are not many candidates willing to challenge him in the race, which in turn makes the race itself less exciting to talk about.

I blame it on the RNC: How many Republicans even knew that they could vote on Super Tuesday!? https://t.co/W3vtgGMJgl

Actually, Trump is one of the most prominent topics in this election both for the Dems and the Reps: he is featured almost in every set of social data we collected. 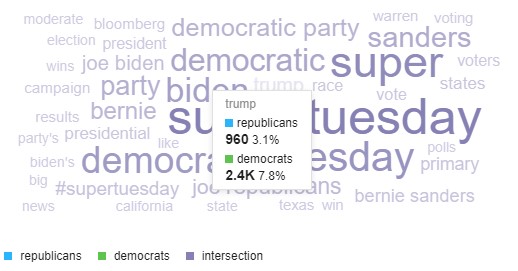 In case you want to know what the president himself mentions the most, check out our analysis of Donald Trump’s Twitter!

I was interested to see how the official polling compares to social listening analysis. RealClearPolitics aggregates all the latest polls across the states to make up the poll average for the candidates. According to the polls gathered by March 5th, Biden takes a strong lead. 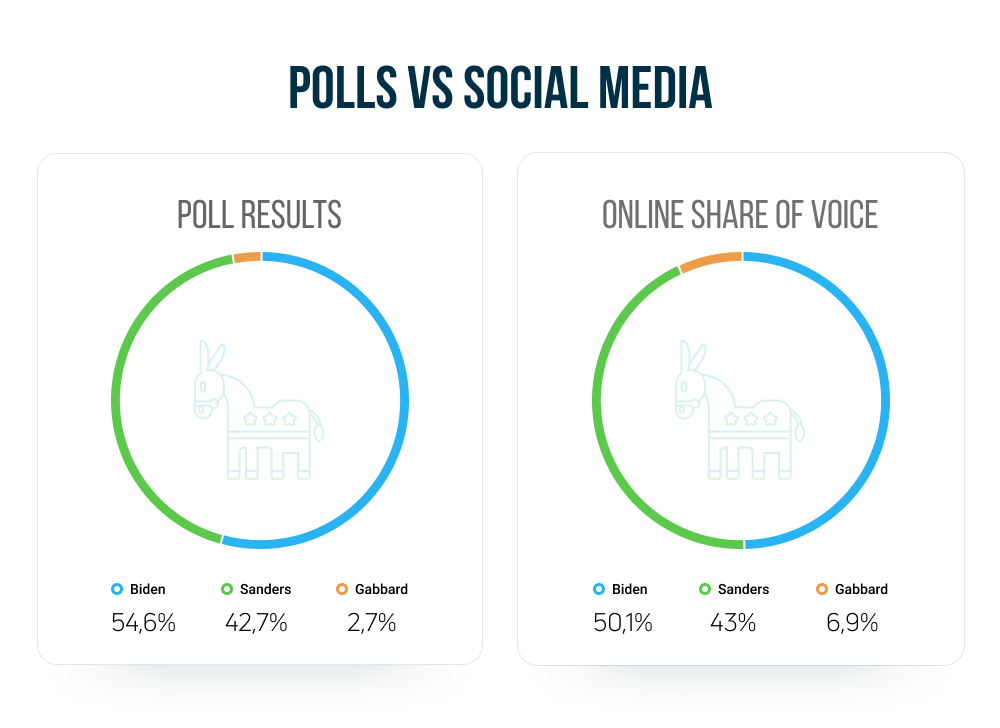 For the last month right until Super Tuesday, Bernie Sanders claimed the biggest Share of Voice over the other two candidates. In contrast, Biden, who is now leading the polls and has the highest number of delegates behind him, wasn’t as successful online for the most of February.

Logically, the reach peaked once the Super Tuesday results were out, with social media discussing Biden’s major win. And both polls and social media seem to agree that America has little chances to get its first woman president in 2020 with Tulsi Gabbard claiming just 1,8% of all social media mentions.

If you look at the RealClearPolitics’ graph, you can see that Biden was struggling a bit in February before Super Tuesday arrived, just as social listening data suggested. 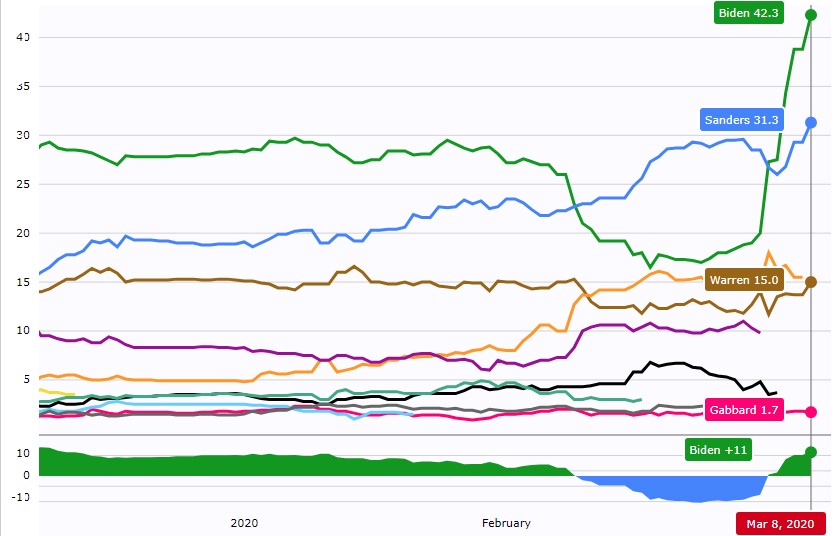 Poll average for Democratic Presidential Nominations for the last 3 months

Something as volatile as political preferences change very quickly. Luckily, social media are quick enough to catch up.

If we look at the sentiment analysis, Biden and Sanders seem to have almost equal shares of positive mentions, but the number of negative mentions for Bernie Sanders is a bit higher which was caused by the disappointing Super Tuesday results.

To answer the question I raised, the social listening data does correlate with the results of the polls thus representing the public's view of Democratic candidates.

For each candidate I used Awario to analyze the reach and sentiment of their mentions before and after Super Tuesday. I juxtaposed this data with the current number of delegates each candidate has on March 9th.

The current number of delegates: 574

Super Tuesday results didn’t look so bright for Bernie Sanders, but you wouldn’t guess it from looking at the social media data. Out of the four Democratic candidates, Bernie has the highest number of mentions and online reach in the last 30 days.

Reach of Bernie Sanders’ mentions in the last 30 days

So why is he not leading the race currently? Perhaps not all publicity is good publicity after all? But the sentiment analysis of senator Sanders’ mentions also looks quite good with no noticeable negative peaks.

One thing that could explain this data paradox is the age of the voters: young people are more active on social media than older generations and polls confirm that young voters tend to favour Sanders.

Another reason that could explain the high reach of Bernie’s mentions is the strong celebrity support: Sanders was endorsed by people from all walks of life from Slavoj Zizek to Cardi B.

MY GUY. thank you Senator Sanders for coming to my show, making my whole night and for all that you stand for ! @headcountorg and i are doing our best to make you proud. we’ve already registered 20k+ young voters at my shows alone. also i will never smile this hard again promise. pic.twitter.com/7UYqkXR0g1

Speaking about reach, I wanted to check candidates’ most popular tweets since the beginning of their election campaigns. For Bernie, it’s this one:

Prepare for Trump being a recurring guest star in this category!

Overall, we can see that Bernie has strong online support, which started to diminish a bit once Super Tuesday results came in. But why is this support not translated into the actual votes? Is it the fault of the establishment? Traditional media? Read on to find out!

The current number of delegates: 670

Super Tuesday brought Biden much more favourable results, which is represented in the changes in his reach in the last month.

Reach of Bernie Sanders’ mentions in the last 30 days

Do you see this giant spike right after the 3rd of March? That’s the buzz that the candidate generated with his Super Tuesday win. Prior to this, you’ll notice that Biden’s share of voice was pretty low. This reflects the actual public opinion of the candidate: Biden got a bit lost in the middle of February and didn’t perform as well as he was expected at the beginning of the Democratic primaries in Iowa and Ohio, but his Super Tuesday win gave him a much-needed boost.

As for sentiment, the peak in the number of positive mentions coincided with his Super Tuesday win as Biden supporters celebrated their victory.

Joe Biden also has a lot of influential public figures supporting him including the candidates that dropped out of the race: Pete Buttigieg and Amy Klobuchar that are even featured in his Topic cloud. 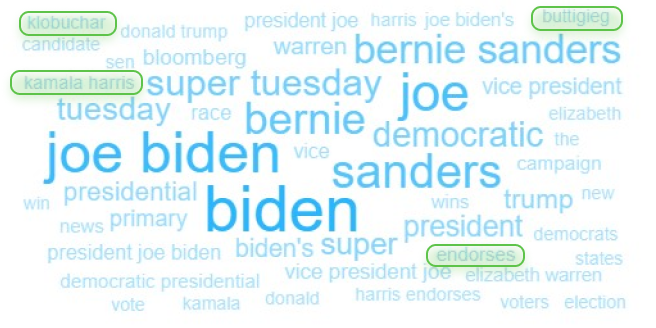 Apparently, the support from the political figures and former candidates convinces voters more than celebrities and prominent thinkers. That’s a good social media marketing lesson right there: high reach won’t end up in a high conversion number unless you’re reaching the right people (and are using the right influencers to do it).

Joe Biden has been endorsed by:

Bernie Sanders has been endorsed by:

As for the most popular tweet from the candidate, you won’t be surprised to know that once again it’s about the current president.

The world is laughing at President Trump. They see him for what he really is: dangerously incompetent and incapable of world leadership.

We cannot give him four more years as commander in chief. pic.twitter.com/IR8K2k54YQ

The current number of delegates: 2

Gabbard is the only woman left in the race by now, and the chances are looking no too bright for her. Compared to the other two candidates, her social media reach is almost invisible.

Of course, she also got a little post-Super Tuesday uplift in the number of mentions, but nothing compared to the other two candidates. In addition to that, one of the most popular opinions on Tulsi expressed online is the surprise that she’s still running which is reflected in her Topic cloud. 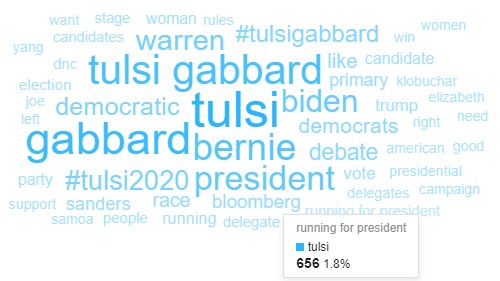 This is the third time this week that I have forgotten Tulsi G*bbard is running for President. https://t.co/xYaD3fsTkm

Surprisingly, the most popular Tweet from Tulsi Gabbard isn’t criticizing the current president, but rather his opponent in 2016 elections.

Great! Thank you @HillaryClinton. You, the queen of warmongers, embodiment of corruption, and personification of the rot that has sickened the Democratic Party for so long, have finally come out from behind the curtain. From the day I announced my candidacy, there has been a ...

One major theme that comes up in every election cycle (and politics in general) is the role of mass media. Doesn’t matter who you support and what politics you sympathize with, chances are someone in your camp is accusing mass media of favoring this or that candidate.

Is there a grain of truth in that? Given how many people talk about it, perhaps there is, but let’s not take anything as a given. We have a powerful analytics tool at our disposal, so let’s check how media outlets were reporting on the Democratic primaries candidates in the last 30 days.

This infographic shows how each of the three candidates was mentioned in mass media in the last thirty days.

Awario’s Influencers report also helped to determine the top 5 most influential media outlets for each candidate. 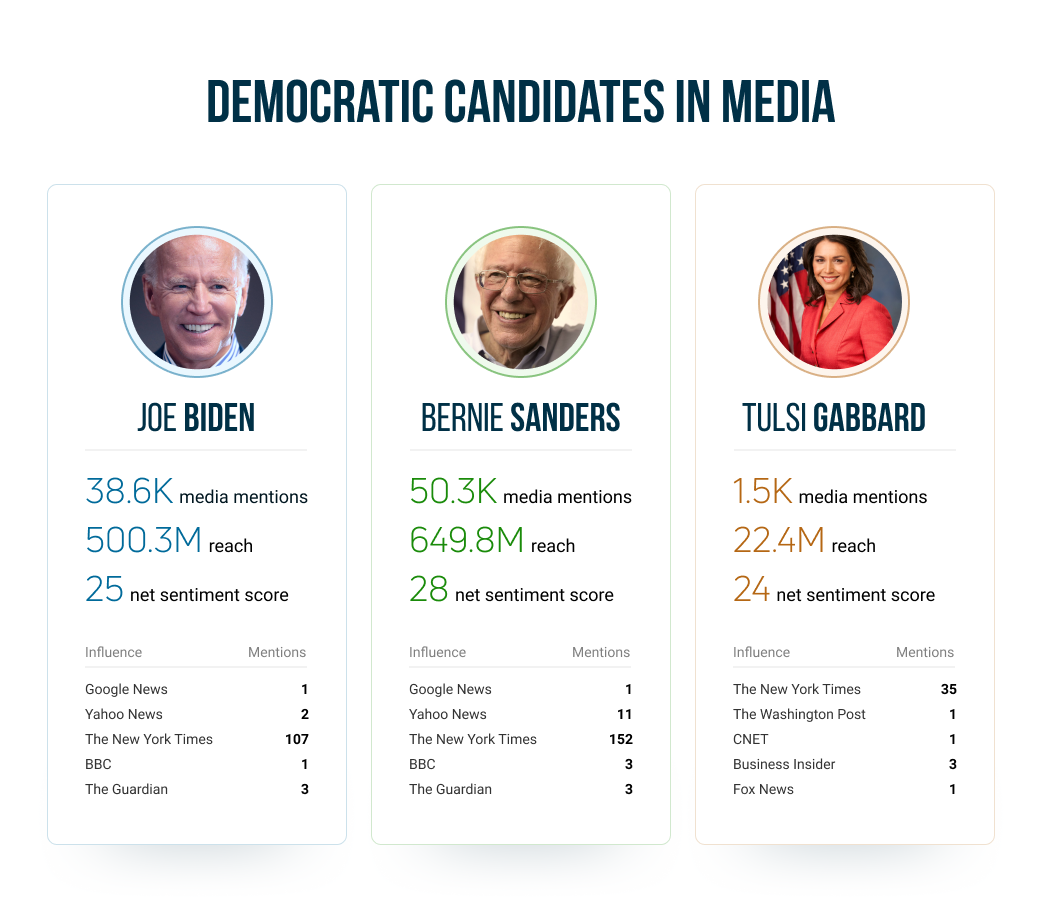 So, according to social listening analysis, mass media give more attention and slightly more positive mentions to Bernie Sanders, and not Joe Biden, which goes against what many Bernie supporters claim.

The closer we get to the election day, the faster things are happening and the public opinion changes. Luckily, if we look into social listening data we can track these changes and tie them to other sets of data such as poll results and the actual voting results. 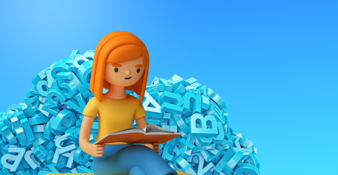