In a world where Netflix is a basic need and a common verb, video streaming services are fighting for a place in the sun. Some are doing better than others, and all are doing their best to win as many households and hearts as Netflix allows.

The result is a society divided among video streaming service providers. What they provide is comfort, a sense of companionship and belonging, the education we under-received, and the entertainment we crave in good times and bad (but especially bad).

When it comes to choosing a video streaming service, we all have our reasons. We at Awario, meanwhile, have access to the social media monitoring technology that allows us to not only see user reasons but also analyze them in bulk. And that's exactly what we did.

There are countless listicles of best video streaming services out there. If you have a month to spare, go ahead and dive in. What we aimed to do instead is to collect and analyze honest user feedback on 5 of the top streaming service providers:

Specifically, we wanted to know just how much Netflix dominates the discussion on social media, which speaks volumes about how easy or difficult it is to even consider other providers. Because we were dealing with raw user feedback, we were also interested to see the shares of positive mentions for each video streaming service, i.e. how much customers really like them.

Finally, we embarked on putting social data onto the U.S. map to understand market segments better. By matching social media listening analytics to user locations, we would be able to see the brands' performance within each state.

6 weeks ago, we set Awario to collect every mention of Netflix, HBO, Amazon Prime Video, Hulu, and Disney Plus posted on social media in English. Awario covers Twitter, Facebook, Instagram, YouTube, and Reddit, which gives us a decent picture of what real users have to say about video streaming services.

Once we had the mentions — a total of 1.17M social media posts — we turned to social listening analytics. Basically, we were looking to run a competitor analysis to benchmark the brand's shares of voice and user feedback. In addition to that, we checked the sentiment behind the mentions, which is also a part of competition research, to analyze the tone of conversations.

Since Awario can tell positive and negative of mentions apart, we additionally calculated net sentiment to determine the shares of positive to negative posts.

Last, we tracked geotagged social media posts and mapped net sentiment across the U.S. To do that, we calculated net sentient for each brand state by state. Let's see what Awario helped us understand.

Before we break it to you, you might want to stop scanning the full text to try and guess how much social media talks about each of the video streaming services. After all, there's a reason Netflix and Chill, coined and posted on Twitter back in 2009, got a life of its own and became a commonplace term for whatever SFW words can't convey. 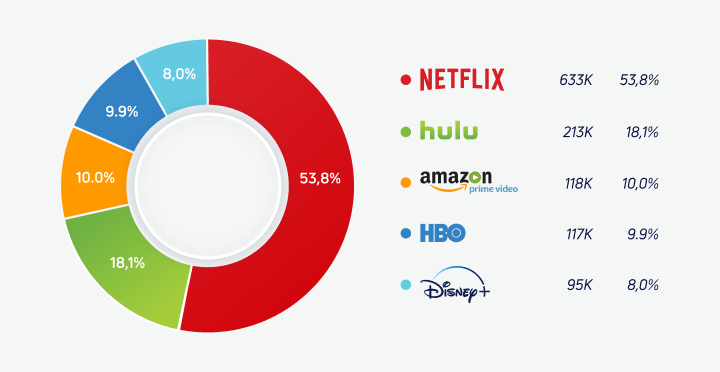 Share of voice for each of the video streaming services

Pretty cool to be Netflix, isn't it? Those of you who came close to the truth when guessing Netflix's share of voice, please drop me a line in the comments. Share of voice primarily represents the sheer number of conversations around a brand. But it also reflects the market shares our contestants hold, with Netflix stealing the show and over half of the English-speaking markets with 633K brand mentions.

There are so many things that make Netflix the star it is. Not the least of which are powerful alliances manifesting themselves both online and offline.

If we dive deeper into the mentions, social media also offers plenty of unorthodox answers to the Netflix question.

Netflix is iPhone & Amazon Prime is Android. Idk how it just is

For non-Netflixes of this world, the playfield is more or less even. In terms of the overall social media buzz,  Disney+ and Hulu are not too far apart: 8% vs 18%. And yet their shares of voice are the endpoints of the market beyond Netflix.

When doing a brand health assessment (or any social media monitoring for that matter), it's necessary to look at the tone behind the mentions in addition to the sheer number of conversations. Sentiment analysis is the most reliable tool to see a reputation crisis coming. Awario tracks the sentiment of mentions non-stop and presents the results in an interactive graph.

You can set the time range and see how positive and negative conversations gain momentum. You can also click on the graph to see all mentions found on any specific date — this is the code of conduct whenever you see a spike in negative (or positive!) mentions.

For the purposes of this study, we focused on net sentiment. Net sentiment shows you whether you have more positive or negative mentions, and by how much.

There's little use guessing the winner as the graph is right below but you're still welcome to.

Who would have thought, right? As far as the tone of mentions goes, Netflix is neither the winner nor the runner-up, with Amazon Prime Video and Disney+ emerging as the good guys. The two might not hold the biggest market shares, but people seem to be loving their experience with both Amazon Prime Video and Disney+ much more than their experience with Netflix.

Meanwhile, Hulu appeared in an unflattering light, with a net sentiment of 2%. A quick look at Hulu's Mentions feed is enough to understand that users are not happy with the platform's advertising practices. Apparently, when a No Ads plan still allows ads before and after some of the top-rated shows, people can't stop talking about it.

I don’t understand why Hulu has advertising in between shows

ey financial institutions advertising on hulu, give it a rest

The commercials being shown during Forensic Files II on Hulu are so off. Stop advertising night vision binoculars and construction equipment. Your audience is twentysomething women and you KNOW IT.

The result: Hulu is the absolute least favored video streaming service provider according to social media. It's up to Hulu whether to take this seriously or not but to make sure your brand is way ahead of all reputation crises, try social media listening and see what it can do for you.

For Netflix, net sentiment within the U.S. varies from 0.09% to 0.55%. In simple terms, the U.S. map for Netflix is mostly yellowish-green, i.e. the video streaming service isn't scoring the best deal when it comes to consumer sentiment. Much like in the rest of the English-speaking world, Netflix is the most widely-known, but not necessarily the most widely-praised platform.

The most discussed series on Netflix in the 6 weeks we were tracking brand mentions was Avatar: The Last Airbender. The animated series, originally aired on Nickelodeon from 2005 to 2008 and now about to be released on Netflix, made big waves on social media and brought a lot of engagement and user love to the video streaming giant.

Water. Earth. Fire. Air. All three seasons of Avatar: The Last Airbender are coming to Netflix in the US on May 15th. pic.twitter.com/RCKylFYknA

As soon as the announcement appeared on NX Twitter account, it became clear that Netflix had made the right move. Among other mentions that generated the most user engagement for Netflix were shout-outs from Samsung, National Geographic, FC Barcelona, and Ellen DeGeneres.

I asked the cast of Netflix’s #TooHotToHandle some of my #BurningQuestions. As you might've guessed, they were almost too hot to handle.

The map is always greener for good guys — the general rule of reading net sentiment maps couldn't be more true for Amazon Prime Video. It appears that the platform is just as loved in the U.S. as it is in the rest of the English-speaking world. With a couple of patches of yellow, the map is mostly green, which means that Amazon Prime Video is doing it right.

As you can see, HBO's net sentiment map trends toward orangey big time. This means that the video streaming service provider most likely did wrong by the people of the U.S. With the exception of Vermont, coincidentally the friendliest state as per another study of ours (spoiler alert: Vermont is a smaller state with fewer mentions, which may contribute to its high friendliness scores), HBO can't boast a lot of positive feedback.

The most discussed and anticipated show on HBO during the 6 weeks of our study was, surprisingly, a cooking show. Odd for a platform that brought to us nine noble families waging war against each other in order to gain control over the mythical land of Westeros, but then again, it's all about going with the right star.

Meanwhile, HBO's been enjoying generous support from the media. The biggest influencers detected in the course of our study included CNN, UNILAD, VT, and even The Tonight Show starring Jimmy Fallon. HBO's biggest human (as opposed to institutionalized) influencer was Hugh Jackman.

Hulu, the least liked video streaming service provider in the English-speaking world, is even less liked in the U.S. Hulu's net sentiment map is inflamed in more ways than one, with prominently orangey patches and what looks like an open sore the size of Rhode Island.

In addition to the full-of-ads No Ads plan, social media users dwell a lot on the topic of the video streaming service's usability. One of the biggest keywords in Hulu's Topic cloud is the platform's layout that seems to be a point of frustration for many.

The Hulu layout is so dumb and unnecessarily complicated. What I’m currently watching should be one of the first things I see when I open the app/site.

While product development might not be at the top of Hulu team's to-do list, influencer marketing and media coverage are taken care of. The biggest names that have mentioned the streaming service in the past 6 weeks were The New York Times, Vogue Magazine, and 50 Cent.

Disney+ brings the greenery back, showcasing user love across the U.S. Once again, the global trend was reinforced on a smaller scale, with good guys proving to be good for all of the English-speaking world.

The host of Pixar, Marvel, National Geographic, and Star Wars, Disney Plus sources a lot of user engagement from its legendary tenants.

Among other shows that bring Disney+ fans from all walks of life are NatGeo's Running Wild with Bear Grylls and The Simpsons. In addition to that, Disney Plus gets visibility boosts thanks to its influencer campaigns.

My lights are off, TV is on, its time for The Lion King! Come all my rafikis, lets do this together!! 🦁 Disney + Hotstar comes home tomorrow! #DisneyPlusHotstarPremiere @hotstarpremium @hotstarvip

What does it all mean?

We analyzed 1.17M social media posts featuring 5 of the best video streaming service providers to see a market beyond Netflix. Here's what we found in the process:

Whether it's the volume of social media conversations or hard-earned user love we base our judgment on, the winner streaming service will be different. Some find a personal favorite, some like to try every option on the market and find their ultimate combo, and some can't help stepping outside the video streaming services game.