Social issues and marketing: why brands want to cause controversy

Imagine this: you log in your Awario account, go to Dashboard to check on your brand and see a sudden spike in negative mentions.

What do you feel? Panic? Fear? Well, it seems unbelievable, but for some brands, this is the desired outcome of their marketing strategy. In this article, I want to talk about social justice marketing and why some brands intentionally provoke a public backlash. Let's dive in!

The cornerstone of successful marketing is understanding your target audience. The ideas and thoughts that prevail in the public mind are constantly changing, and the role of a marketer is to identify these changes and come up with an effective marketing strategy that would respond to them.

According to a survey by the Washington Post and the Kaiser family, one in five Americans has participated in some form of the political rally since the beginning of 2016. Many of them intend to become more politically active in the future. The latest tendency in the social zeitgeist is “wokeness”, or social and political awareness. More and more people are talking about social issues like sexism, racism, and inequality, and they are trying to find ways to solve them.

The latest research by Edelman proves that consumers are growing more and more suspicious overall, with 57% stating that the overall public system failed them. Moreover, audiences get used to marketing techniques pretty quickly and stop reacting to them: in psychology, this effect is called habituation. Just think about how many ad rolls that play before YouTube videos you actually notice and remember. For these reasons, advertisers have to keep coming up with new ways to promote their products and services: using sexual innuendos in ads, creating weird and quirky commercials, being sassy on social media.

It didn't take a lot of time for marketers to notice the importance of social issues for consumers and find ways to use it. Showing responsibility and taking a stance on something builds the so-much-needed trust between a company and its target audience. Many brands are dipping their toes into what could be called a "social issues" marketing, however, not all of them get a positive response (just ask Pepsi). Some brands don't dare to address such issues and choose to stay away from the thin line between being relevant and being controversial.

The Brand Risk-Relevance is the idea by Fortune 500 chief marketing officer, Peter Horst, presented in his latest book “Marketing in the #FakeNews Era: New Rules for a New Reality of Tribalism, Activism, and Loss of Trust". In it, he talks about the different ways to reflect social justice issues in your marketing strategy. 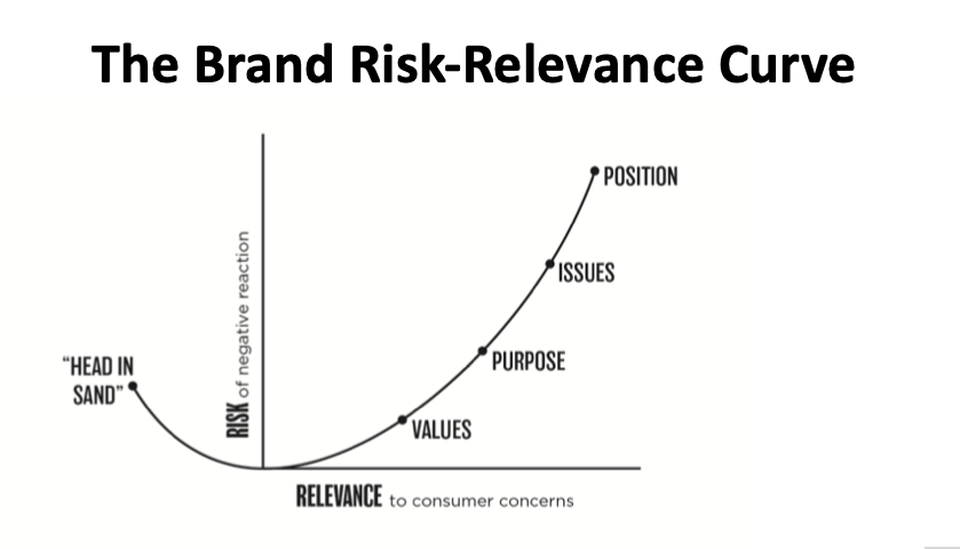 The first way is the Head in sand approach when the company simply stays out of anything even slightly political. This approach is not ideal for two reasons: you lose relevancy and trust of your customers AND you may come under fire whenever there is a social issue that directly affects your company. Just think about the Uber scandal which we described in our post on PR crises that could be prevented with social listening. 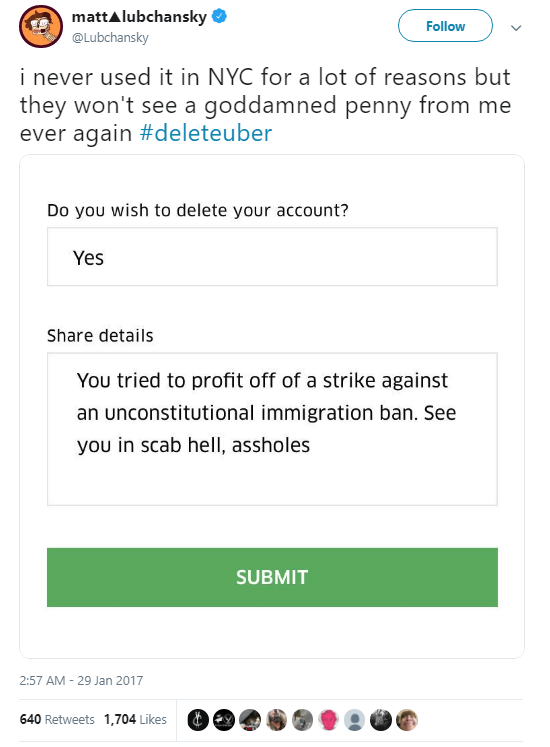 The next step is addressing Values. This is a safe and basic tactic that is almost ubiquitous in modern marketing. Go to any brand's website, and you will definitely see a page describing their mission and values. 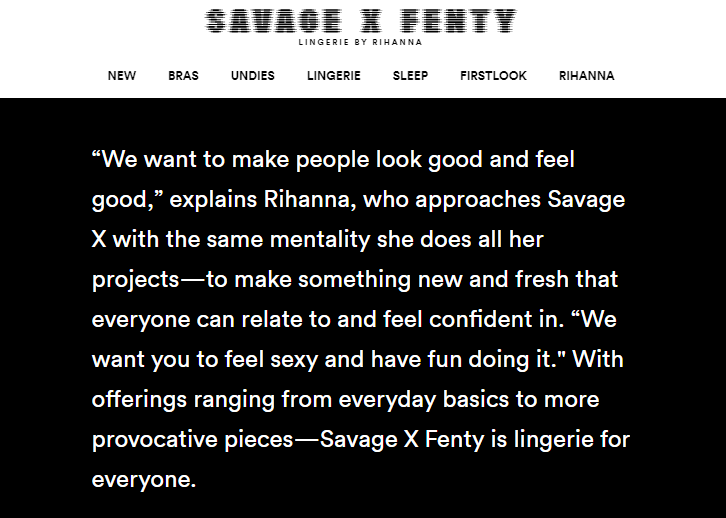 Typically, values become a part of a brand's image and they don't always refer to social justice issues: the values can be as simple as family, safety, confidence and so on. Peter Horst recommends to integrate them throughout your organization as an internal moral compass. Buffer is a good example of focusing on values in its marketing: they emphasize the importance of diversity and transparency in their reports and blog posts.

A more proactive action is embracing Purpose. In this case, companies take on generally popular and uncontroversial issues and do not make any hot political statements. They incorporate these issues in an advertising campaign or an overall brand strategy.

A good example is Always' Like a Girl campaign which promotes confidence in young girls or Dove's Real Beauty campaign (which had its own social justice faux pas when it was accused of racist undertones).

These campaigns are not expected to receive backlash — who would be offended by the idea of finding confidence in your natural beauty? "Fake beauty" proponents?

The next, somewhat riskier step is to present controversial Issues without taking a side. This tactic results in much more buzz around the brand, however, there is a higher risk that it will piss people off. The advantage of this tactic is that you leave yourself a room to backtrack and apologize — "we didn't expect such a blowback, we just wanted to bring up this significant topic". This generates even more publicity: first, because of controversy around the ad and then another wave once there is an apology released. Again, think back to that Pepsi ad — they didn't take a particular stance on the Black Lives Matter vs the police issue, they just addressed it in their commercial (however clumsily they did it).

A good example of a marketing campaign using the issues tactic is Heineken. Their viral #OpenYourWorld campaign put the spotlight on the political divide that is so prominent in the world right now, but instead of taking a firm stance on issues like feminism, transgender rights, or climate change, they focused on the basic values of communication and cordiality.

Finally, the tactic that has the highest risk of causing backlash is taking a Position. In this case, a brand states their view on a particular issue and might even take action beyond creating commercials/slogans/visuals such as donating towards specific charities or stopping work with certain influencers. The line between Issue and Position can be quite vague: sometimes it might be hard to predict how the public will react to some of your choices, for example, featuring a certain controversial person in your commercial.

Recently, there have been a few marketing campaigns that showed brands taking a stance and received A LOT of negative reaction. But it would be a mistake to think that this backlash wasn't expected. We're going to break down several instances when brands took on a position in a socio-political debate for marketing purposes, both deliberately and unintentionally, and discuss why being controversial is not a bad thing.

One of the earliest examples of a brand taking a position and causing a strong reaction was Keurig. What curious about this case is that this move was probably unintentional or, at the very least, unplanned.

Angelo, thank you for your concern and for bringing this to our attention. We worked with our media partner and FOX news to stop our ad from airing during the Sean Hannity Show.

They received a lot of support for this decision and some new customers, however, this wasn't the end of the story. The Sean Hannity fans noticed this vocal response from Keurig and weren't very happy about it. This unhappiness resulted in the #BoycottKeurig movement, where people would proclaim that they would never buy a coffee machine from Keurig and destroyed the machines they already owned.

The boycott received a lot of attention in the media and on social platforms. Even though Keurig didn't plan for this (you can refer to this internal memo sent out by Keurig's CEO), the free publicity their tweets generated was noticed. Keurig's operating income rose 14% in 2017.

I bet you immediately thought of Nike when you clicked on this post. The backlash against this campaign was one of the most recent and eminent examples of a brand taking a position, but this time the backlash was expected by the company.

Last year in September, Nike launched their Dream Crazy campaign with American athlete Colin Kaepernick as the face of the campaign. Kaepernick is famous for his activism, notably, for taking a knee before the NFL games during the American national anthem to protest police violence against black people. He was featured in the video commercial and on posters. 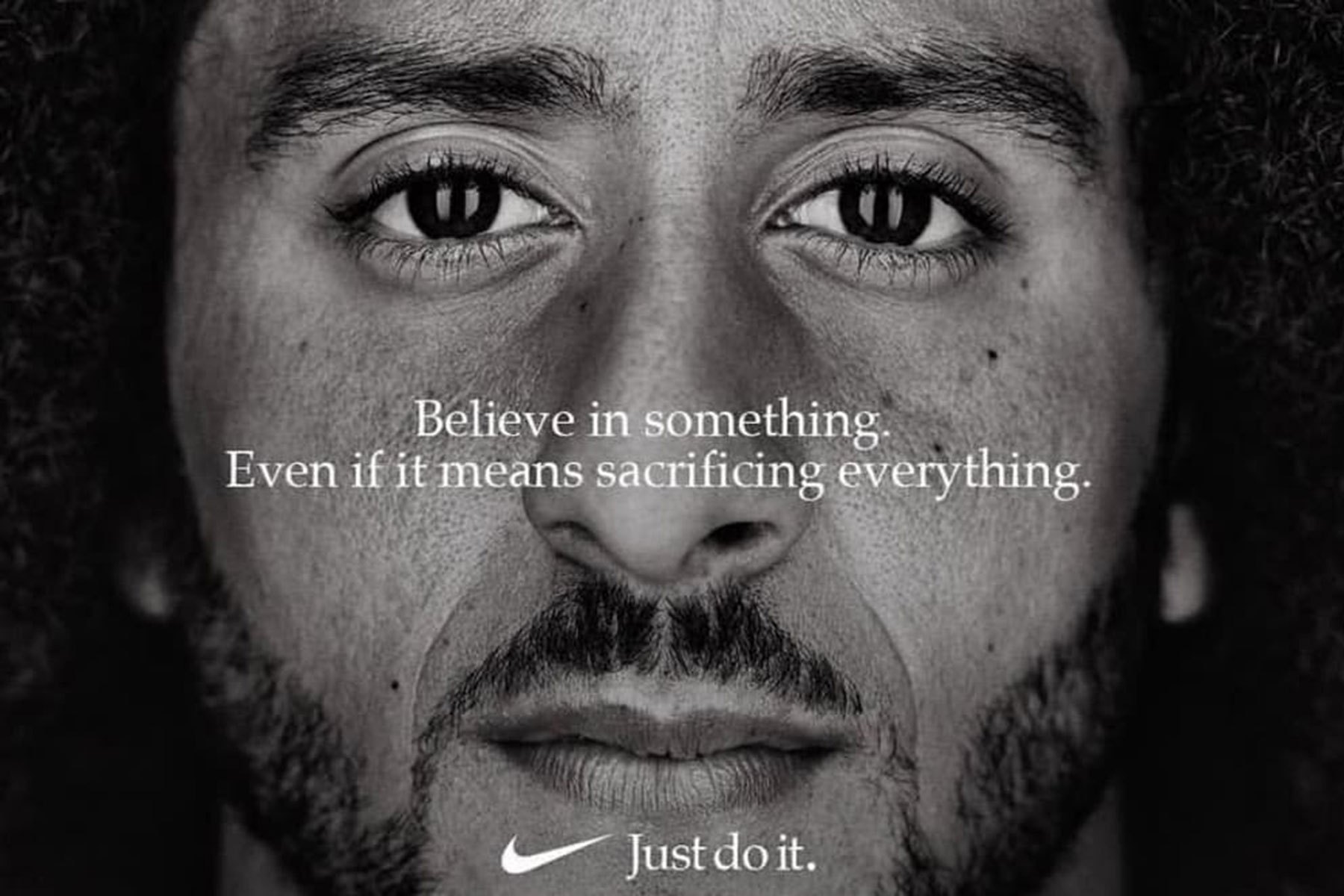 There was an immediate backlash against Nike upon the release of the campaign - Kaepernick is an extremely controversial figure and some people felt that Nike shouldn't have supported him. The number of Nike mentions reached the 2 million mark on September 6, with the negative sentiment prevailing. 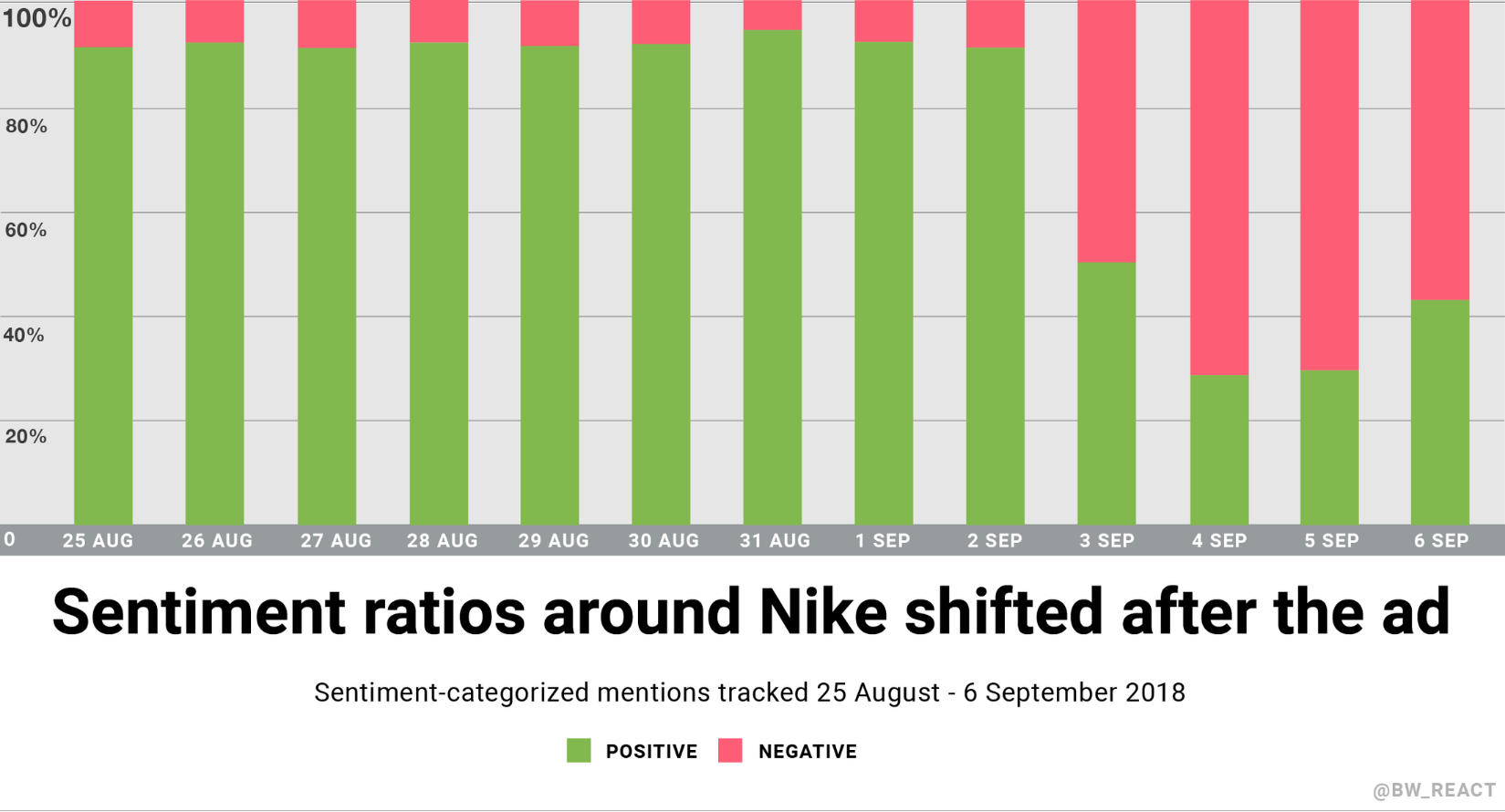 And of course, it wouldn't be a proper backlash without a boycott. The hashtags #nikeboycott and #boycottnike gathered more than a billion impressions and were the third and fourth most popular hashtags in the conversation around Nike after #justdoit and #nike. Social media users posted videos and photos depicting them destroying Nike's products.

This situation looks like a marketer's nightmare! However, that's exactly what they wanted. The campaign went viral, was covered in major publications for a long period of time (since everyone wanted to talk about the boycott) and generated a crazy amount of publicity for the brand. Bloomberg reported that just 10 days after the campaign launch, Nike reached its all-time high on the stock market and made 6 billion dollars. And that's not even mentioning the long-lasting effect of seeing Nike's brand name everywhere for a week.

Gillette: The Best Men Can Be

The latest example of a brand knowingly causing backlash is Gillette's commercial "The Best Men Can Be" which is a play on their longtime slogan "The best man can get". The commercial focused on sexist behaviours that are common for some men such as cat-calling, mansplaining, bullying and so on. The video encourages men to become better.

To surprise of no-one, the commercial got a lot of attention — and it wasn't all positive. The #GilletteAd hashtag reached more than 150 million people and is still being mentioned 4 months after the video was published. To compare, on an average day Gillette gets around 300 mentions vs 11 400 mentions on the day the video was published (the data gathered and analyzed by Awario). 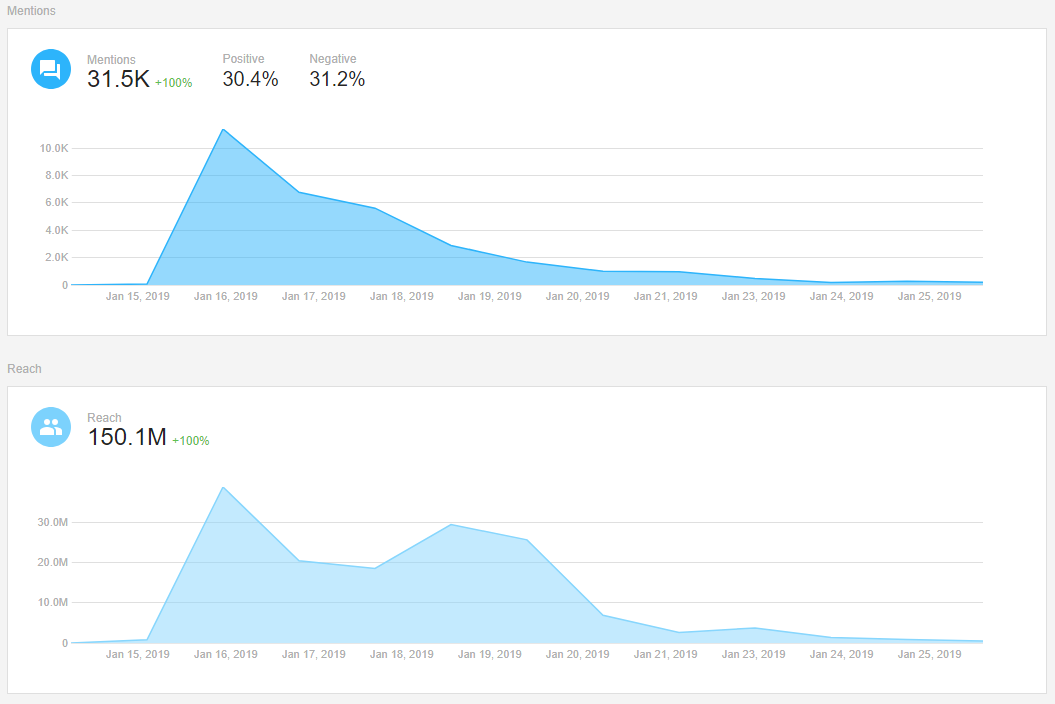 The sentiment of the mentions is distributed approximately equally between positive and negative: some people appreciated the message and some thought that it was generalizing and tarnishing men.

Hey @Gillette, your ad was fantastic. From now on, I will purchase your products. Any “men” offended are the ones who suffer from toxic masculinity. Keep up the great work! #GilletteAd

As you can see from the topic cloud, the ad managed to spark a lot of conversation about presented issues.

The #gilletteboycott hashtag took up merely 3,5% of conversations around the brand, and, as Gillette's CFO Jon Moeller stated in the comment to Fortune, “Retail sales trends stayed in line with pre-campaign levels.” He also pointed out the “unprecedented” levels of media coverage and consumer engagement. Gillette fully knew what they were signing up for when they released the commercial, and I bet they are satisfied with the results.

The secret behind social justice marketing

Despite these examples, many brands will still be hesitant to raise social issues in their marketing strategy, and some of them will probably mess up while doing it. So how do you design a successful campaign that will express your position on a social issue, make you relevant in the eyes of the public and use the backlash to drive even more profit and boost your brand awareness?

To do this, you need to know and understand your audience. Do polls, research the market and, obviously, engage in social listening! Social media is the platform where viral advertising is born, and it would be a mistake to ignore the vast amount of data and audience insights social listening can offer. By analyzing social media perception of certain issues and personalities, you can understand whether social justice marketing will fit your strategy.